The St. Ignace girls basketball team is obviously quite familiar with the Mackinac Bridge.

The Saints live at the Upper Peninsula's eastern connection to downstate, and they seem to make regular trips across the bridge in quest of MHSAA championships.

The Newberry and Stephenson girls basketball teams are virtual strangers to the glorious span that connects the two peninsulas. That is about to change, as Tuesday they face each other in a Class D Quarterfinal at Negaunee in hopes of earning a first downstate trip in decades.

St. Ignace, meanwhile, nudged Calumet 53-52 in a classic – and rare – showdown of reigning MHSAA champions. It was the first loss of the season for Calumet, which won the Class C title in 2015. The Saints won the Class D banner a year ago, then returned to Class C this season.

Ingalls said Gustafson and Jade Edelman have been "stepping up" down the stretch. Ostman, who signed to accept a basketball scholarship to Michigan Tech University, is averaging 19.9 points and 8.9 rebounds this season.

"We have a different group of kids this year," said Ingalls, admitting to some roller-coaster performances this season. "They had to step up in different roles and they have been learning and learning. It's been a fun year, but it has been challenging at times. We've had to walk them through a lot of stuff. We really have been re-inventing the wheel some times."

Under Ingalls since 1999, the Saints are a lofty 360-67. That success continued this year because, as the 2016 Upper Peninsula Sports Hall of Fame inductee said, "We try to raise the bar at a high level. How good do we want to be? We want to get to a certain level every day."

Ingalls said losses to Newberry and Sault Ste. Marie were beneficial. "They really made us dig deep. It was a good lesson for them," she said.

The Saints are accustomed to playing in pressure situations, and Ingalls said this year, "They put the pressure on themselves. I couldn't be more proud of this group. It's taken a while to click, and we're still clicking. We're getting closer together and becoming more of a family.

She said slipping past Calumet was special, because the teams bonded last year at the bridge when the Saints greeted Calumet upon their trip back from East Lansing. She said it was hard to see Calumet lose "in a game that was played the right way, just a good basketball game, a clean basketball game."

While crossing the bridge is old hat for the Saints, none of the Newberry or Stephenson players were even alive the last time their schools made it downstate. "That is pretty cool," said Newberry coach Fred Bryant, who has been coaching these players since third grade and is in his second year with the varsity.

A member of that 1990 Regional title team was Chris Nance, perhaps the school's best player. She was at Thursday's game and talked to the team after the game. "She told the kids they were a lot of fun to watch and that they remind her of her team," said Bryant, who added that Nance said both clubs did it by "hard work and determination."

The Indians lack size, with no one taller than 5-foot-7. They like to press and use an up-tempo offense, averaging 53 points while allowing 36. "We try to push the tempo as much as possible," said coach Bryant, noting they are used to playing against bigger teams, which will be the case again Tuesday.

Playing against St. Ignace over the years has helped this unit develop, highlighted by a split of the regular-season series this season and three losses by a total of 11 points last season. 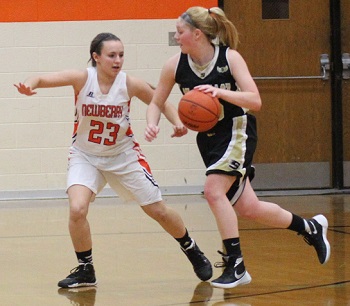 The Indians learned those lessons well, persevering several times this season, highlighted by erasing a 10-point District deficit against Engadine, overcoming a couple of deficits to edge Posen in overtime and then coming back from a 10-point halftime deficit against Pickford on Thursday.

"I don't think it sunk in until after we left the restaurant in St. Ignace after the game Thursday," Bryant said, indicating the final 45 minutes on the bus were quite lively.

Bryant said the players have been working hard to reach this point. "It is nice to see them realize their potential. I hope this resonates through the program, I hope this lights a fire. We haven't had any sustained success in our program."

Although Stephenson has not been downstate since 1982, the Eagles have enjoyed more success than Newberry. They have taken five District titles since then, including in 2010 and 2014, and this year stunned favored Bark River-Harris 57-56 in overtime in a District test at BR-H.

"Our regular-season game (with BR-H at Stephenson) was the turning point of our season," said second-year coach Shanna Beal. Noting the Eagles had only six players available because of illnesses, she recalled having to finish with three players because of fouls. BR-H won 61-56 but Beal said, "They realized what they could do. Bark River is the team we tried to compare ourselves to."

The District game provided "a championship game atmosphere. It was just crazy," said Beal. "It was kind of shocking, and it was a great feeling (to win). Their kids had such high expectations, and we had such a good halftime lead (32-17).

"We had prepared for it so much and we used a different game plan to try to shut down their post players. We were fortunate to come out on top."

In the District finale, freshman Autumn Rasner hit six 3-point baskets and scored 21 points in the first half as the Eagles defeated Powers North Central. Rasner had 17 points and four triples against Forest Park in the Regional finale.

Beal said the team had a police and fire squad escort out of town Thursday and again when the team returned from the Regional finale.

She said she made more strategic adjustments this season and the Eagles "took it game-by-game. We weren't disappointed with our losses (to BR-H and Norway) because they played their hearts out."

PHOTO: (Top) A Stephenson guard calls out a play during last week’s District game against Chassell. (Middle) Newberry and St. Ignace split a pair of regular-season matchups this season. (Photos by Paul Gerard.)