EAST LANSING – Frank Orlando’s 50th season as a high school coach has been much like many of them – he’s enjoyed another championship contender, led by multiple all-staters, and he’ll bring that team into the final day of the season once again.

But there could be something a little special as Detroit Country Day’s longtime girls basketball leader closes a half century on the bench.

Orlando couldn’t hold back every tear talking about it briefly Friday, after a few laughs when star Destiny Pitts hushed him for giving away the team’s defensive secrets, and as the Yellowjackets decompressed from eliminating reigning Class B champion Marshall 46-42 in their Semifinal matchup.

They’ll face either Freeland or Ypsilanti Arbor Prep in Saturday’s championship game at the Breslin Center, seeking a 12th MHSAA title over Orlando’s 36 seasons leading the program – another piece of hardware to add to a tradition this latest group has maintained.

“I don’t know if you remember last year, but I told you we’d be back here,” recalled Pitts, referencing her prediction after the Yellowjackets fell in a Semifinal in 2016. “Coach O’s 50th year is just so important to us, and getting the tradition instilled in our seniors so we can pass it down to the juniors and sophomores and freshmen. … It’s important to bring (the title) back to our friends, our school and our teachers, because they all believe in us.”

Friday’s Semifinal wasn’t decided until the final minute, something that might’ve seemed to favor Marshall after it won its Semifinal last season with two last-second free throws on the way to claiming the program’s first MHSAA title the next day.

But it was Country Day’s turn after the 2015 champ fell two wins short a year ago.

Redhawks senior Jill Konkle – one of four returning starters from last season’s team – scored with 1:48 to play to give Marshall a two-point edge. But the rest belonged to the Yellowjackets.

Junior guard Kaela Webb scored and then made two free throws to give her team a two-point lead with 44 seconds to play. Pitts added two more free throws for the final margin. In between, senior Tylar Bennett and junior Maxine Moore blocked Marshall shots, ending this season’s attempt at last-minute drama. 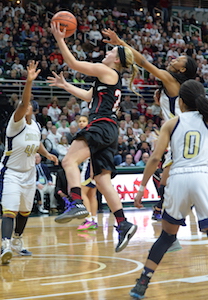 “They never quit, they kept their heads up and they kept playing hard, and that’s all I can say – they never gave up ever once,” Orlando said. “We worked hard on blocking. When they were coming, we told (our players) to wait, wait, wait, and then block. But don’t go after them right away because they are too good at what they do (with head fakes).”

The defensive stand characterized one of the key changes Webb described from last season’s team. In addition to more aggressiveness on that side of the court, these Yellowjackets also have shared the ball more, averaging more than 15 assists per game even as they had just 10 Friday.

It truly was strength on strength, as Country Day used only two subs for a total of eight minutes and Marshall used one sub for nine. Pitts led the Yellowjackets with 13 points and five assists and Bennett added 10 points as all five starters scored at least five.

The Redhawks’ loss brought to an end a two-season 49-4 run that made a nice statement on the value of team basketball in a class where contenders often have one or more stars.

“I think the biggest thing is last year we proved to a lot of people that you don’t need DI (college) players,” said Tucker, who will play Division II hoops next season. “We aren’t a team that’s extra tall. We’re not a team that super quick. We’re not a team that’s crazy athletic. But we work together and we move the ball and we make shots when we need to make shots, and that’s all you need to do to play basketball. I don’t need a million DI commits when I have a great team.”

Marshall graduates five seniors who have been touted in their community since elementary school, and proved those high expectations correct last season. Redhawks coach Sal Konkle – also Jill’s mother – thought that was heaping a bit much on the youngsters at the time, but in the end this truly was a defining group.

“They have really instilled a work ethic in this program – we’ve always worked hard, but this is an extra special group that works extremely hard,” Sal Konkle said. “They just plain and simple do what you ask them to do, and they do it 100 miles an hour and with 100 percent effort all the time.