Win or lose Saturday, another will close as all-staters Kaela Webb and Maxine Moore play their final high school game attempting to lead the Yellowjackets to a third Class B championship over the last four seasons.

They earned that opportunity with a 70-54 win over previously undefeated Kingsley in the second Class B Semifinal on Friday at Van Noord Arena.

“It’s truly a blessing. Me and her have been together since sixth, seventh grade, and we always talked about winning state titles,” Moore said. “Our sophomore year was heartbreaking (a Semifinal loss to Grand Rapids South Christian). But it was a goal of ours coming in here to work hard every day, go hard especially on defense – we know defense is the key to winning championships – and I’m just really excited and blessed to go out there tomorrow and compete.”

It was a Semifinal full of seniors. Although Country Day’s are only Webb, Moore and Destini Lewis, Webb has started all four years of her high school career and Moore is a four-year varsity player and three-year starter.

Kingsley, meanwhile, saw six seniors finish their careers with their only defeat this season after leading the team to its second Semifinal ever and first since 2008.

“As a senior, it’s just an amazing feeling to get here and be part of such an amazing team,” Stags senior Lindsey Boyajian said. “The seniors this year, we came together and we were just like a family. The whole team was a family. It was so exciting. To end my season, as a senior, to make it to Calvin, it was just great.” 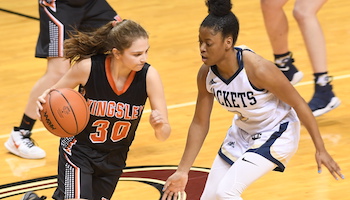 The game was nearly a draw through a quarter, with Country Day (22-4) leading only 14-12 heading into the second. But the Yellowjackets broke out for a 29-16 advantage over the next eight minutes – the eventual difference as the teams played to a near-deadlock over the final two quarters as well.

The most telling stats dealt with turnovers – and their results. Kingsley gave away the ball 22 times, compared to 12 for Country Day. And Country Day scored 33 points off those turnovers, while Kingsley managed just six off their takeaways.

Although the teams shot nearly identical percentages from the floor, and Kingsley outrebounded the Yellowjackets by three, the Stags (26-1) made only 1 of 12 tries from 3-point range – negating something else that usually is a strength.

“We got beat at our own game,” Kingsley coach Matt Schelich said. “Thirty-three to six off turnovers, that’s our ammo. But we ran into a team that’s got incredible size and speed, and as a team there’s not a lot of weak spots out there.”

Webb finished with four fouls but managed to play 31 minutes, second on her team.

“I’ve been here and I know how it gets when the crowd gets into it. … I knew we had to stick together,” Webb said. “What was more important was stopping them from scoring, and me fouling was going to help them score. I had to just lock down mentally with that.”

Brumfield had 14 points for Kingsley despite seeing only 12 minutes of action because of foul trouble as well. Senior Rebekah Crosby had 12 points and seven rebounds and sophomore Brittany Bowman had 11 points.