While Davis is putting his own stamp on the program that has won two MHSAA Finals championships over the past five seasons, he knows the pieces already were in place when he was named the varsity head coach in June.

“There is a lot of ground work already in place at Pittsford,” said Davis. “It all starts with the youth level, and that’s already there. That is a blessing.”

Davis is in his first season at Pittsford and has the Wildcats off to a 3-0 start. He took over for Chris Hodos, who helped make Pittsford a household name in Class D girls basketball circles over the past decade.

“There are things that I do differently, but Chris and I shared a lot of the same philosophies about basketball,” said Davis, a 2007 graduate of North Adams-Jerome. “There are some things that we do that are from Chris. We still run some of the same presses.”

Davis was a three-sport athlete at North Adams-Jerome, playing basketball, football and baseball. He was a four-year varsity baseball player and spent a year on the Adrian College diamond, but an injury that dated back to his high school days cut his college career short.

“I tried it for a year, but it got to be too much stress on my body and arm,” he said.

Davis said that while growing up, his dad coached him in multiple sports. Davis also learned a lot from his high school coaches while playing at North Adams.

“My wife and I had always talked about me getting into coaching someday,” he said.

Davis got his start in coaching at his alma mater. He coached the junior varsity boys basketball team and had coached baseball with Hodos. In fact, when Hodos contacted him about coaching at Pittsford, Davis thought he was talking about baseball.

“After a few minutes, I was like, ‘Oh, you are talking about basketball,’” Davis said. “Chris was a great mentor. He helped me become a better coach.”

Davis spent three seasons as the Wildcats JV girls basketball coach. Hodos, he said, let him run the JV team as he wanted. That valuable experience has paid off in multiple ways early this winter.

“We’re real athletic, and we play good defense,” Davis said. “I have a lot of great defenders. Everything starts with our defense.”

Davis said the team presses, often full-court, and likes to create havoc for the other team as it works to just get the ball over the timeline. 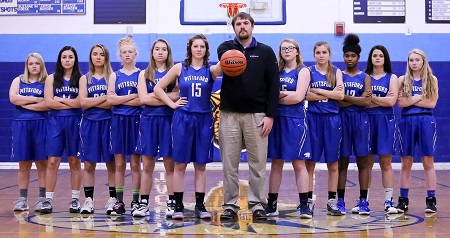 “We are built to run, pressure and play fast,” he said. “We do a lot of trapping and try and force the other team into making bad passes. We like to try and create our offense with our defense.”

The Wildcats have 11 players: five seniors, four juniors and two sophomores. Jordyn Cole has been the team’s top scorer through three games. Another senior, Sara Cole, is right behind her. The other seniors are MaKayla McDaniel, Sam Leggett and Brooke Campbell.

“Jordyn and Sara, I’d say, take the majority of our shots,” Davis said, “but we really don’t have just one girl who can score for us. We don’t have that one player we rely on. We have girls up and down the line who are comfortable shooting. We like to spread it out.”

One thing that has helped in his transition is that every girl on the varsity roster played for Davis for at least a season. They all are familiar with him and his systems. He also brought on Greg Mallar to coach the Pittsford JV team. Mallar is also familiar to the girls because he has been coaching in the Wildcats youth program.

Pittsford became a state power under Hodos. In his seven seasons as the head coach, the Wildcats went 156-14, including five consecutive 20-0 regular seasons and the Class D titles in 2016 and 2017. They fell just shy of Michigan’s record of 78 consecutive wins during that time frame.

"I think that the way that he approaches coaching girls basketball fits quite nicely with the overall small-school athletics philosophy we have here at Pittsford,” Burger said.

“It’s still early,” Davis said. “We’ve struggled at times offensively, but I’m not worried about that at this point. If we play up to our potential, we can make a run. But, like I said, it’s early. We’ll see what happens.”

PHOTOS: (Top) First-year Pittsford varsity girls basketball coach Aaron Davis talks things over with his team during a practice this season. (Middle) Davis and his team are off to a 3-0 start. (Top photo courtesy of James Gensterblum; middle photo provided by Pittsford girls basketball program.)