EAST LANSING – It just happens sometimes, Margo Brown said after she landed her name among the most accomplished long-range shooters in MHSAA Finals history.

And Thursday was just about the best time for another of the hot streaks that have earned the St. Ignace senior a reputation as one of the top bombers in the state.

Brown drilled seven straight 3-pointers to drive the Saints on a 19-point swing and into their third straight MHSAA Final with a 59-50 comeback win over top-ranked Frankfort in the late Class D Semifinal at the Breslin Center.

"Downtown Margo Brown," as her coach called her after, made her first 3-pointer with St. Ignace trailing midway through the second quarter, and her seventh put the Saints up six points with 6:14 to play. Total, she made 7 of 9 from behind the arc to contribute to team percentages that generally defy logic. For the game, St. Ignace shot a respectable 49 percent from the field – but 64 percent from 3-point range.

“It was just a huge momentum change. It got everyone pumped up, the crowd and team especially,” Brown said. “The first half only a couple of us stepped up, and the second half I knew I had to bring it. It was now or never, we’ve gotta get there Saturday. Let’s make some shots, make some plays.

“I just get pumped up. I have a lot of intensity.”

Brown made 11 3-pointers in a game earlier this season, which will tie for third-most in MHSAA girls basketball history when added to the record book this spring. She had made 51 coming into this week, and should push to make the MHSAA record book list for single-season 3-pointers as well, depending on how many she adds in the championship game.

She played the biggest part in earning that opportunity – but one of a number of parts needed in the comeback effort.

Making a pair of 3-pointers as well, Frankfort (24-2) built an eight-point lead six minutes into the game. The Panthers pushed the advantage to 13 with 5:46 left in the first half. Junior Mackenna Kelly did most of the damage, scoring 13 points on 5 of 9 shooting to that point. 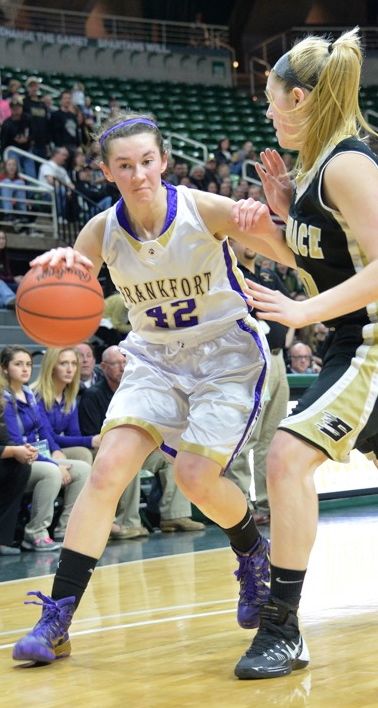 Enter Saints junior forward Shakir Smith, who took over defending Kelly and helped hold the Central Michigan University recruit to 2 of 13 shooting the rest of the game.

Junior guard Abbey Ostman and senior center Sarah Smith joined Brown on St. Ignace’s 2013 Class D championship team, and they had roles to play Thursday as well. Brown had 23 points and four assists, and Ostman added 20 points on 8 of 9 shooting from the floor. Smith had seven points plus game highs of eight rebounds and four blocked shots.

“Basically, I said it’s going to have be an all-out team effort. You’re going to have to dive on the floor and show how bad you want it,” St. Ignace coach Dorene Ingalls said of her halftime time pep talk, given with the Saints trailing 28-20.

“We weren’t just going to get an 8-point basket. We had to go one play at a time. And when Margo can shoot from halfcourt, it helps.”

Frankfort cut its late deficit to five on senior Shayla Soto’s bucket with 54 seconds to play. But the Saints made 7 of 8 free throw shots down the stretch – including the final two by Brown.

“When Margo came out nuclear – that was beyond hot – that was something else,” Frankfort coach Tim Reznich said. “She’s been a great player for quite a while. And we had our best player chasing her."

Kelly finished with 18 points and nine rebounds to lead Frankfort, which played in its first Semifinal since winning back-to-back championships in 2005 and 2006. Sophomore guard Cecilia Schmitt added 15 points, five rebounds and three steals.

Frankfort is a combined 47-4 over the last two seasons.