ERIE – The Liedel family barn in Erie has been home to some great basketball battles the past few years.

A senior, Liedel is in her fourth season playing for Erie Mason. She will enter Friday’s scheduled game against Onsted with 1,657 career points – just eight points shy of the all-time Monroe County Region record of 1,665 points set by Petersburg-Summerfield’s Melissa Taylor during the 1990s. It’s ironic the 5-foot-10 senior guard could set the record against Onsted. It’s against the Wildcats that she scored 51 points in a game last year to break the Monroe County single game mark. “I just love the game,” Liedel said. “There is just something about it. God gave me the talent to go out and play basketball, and I want to return the favor for Him. I just play my heart out for Him.” Those games in her barn, against some of her nine siblings, helped turn Liedel into a superstar scorer. “In our barn, we always play one-on-one,” Mary said. “My brother, Joey, and I play a lot of one-on-one. He’s really helped my game.” Joey is a sophomore and the leading scorer on the Eagles boys basketball team. Mary has led the Eagles in scoring since her freshman year. After averaging 8.8 points a game that season, her scoring average ballooned to 24.2 points a game as a sophomore. Still, she saw room for improvement. “My shooting percentage wasn’t where I wanted it to be,” she said. “I worked hard on that all summer. My game has grown tremendously. Even last year I didn’t shoot very well on 3-pointers. I worked hard all summer shooting to get that percentage up.” Her junior year, she scored 585 points and was named Player of the Year by The Monroe News and second team all-state by The Associated Press. She was held below double figures just once all season. Besides the 51-point outburst, she had games of 44, 33, 32 and 30 – all while shooting 40.1 percent from the floor and 66.1 percent from the free throw line. She got to the free throw line 242 times. Three times she attempted at least 20 free throws in a game. Blissfield head coach Ryan Gilbert called her the “ultimate competitor.” “She’s a very humble person,” Gilbert said. “Her ability to finish around the rim and through contact is the best I have seen since I have been here.” Another area of her game that she wanted to improve was rebounding. That mission was accomplished as she had 14 double-doubles as a junior, including a career-high 22 rebounds in one game. Onsted head coach Brandon Arnold said that 51-point game was remarkable. Liedel was 23-for-29 from the free throw line and made 13 field goals. 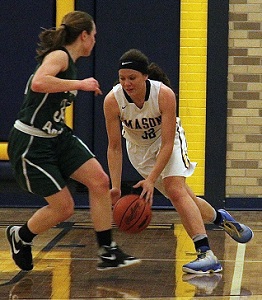 “On that night she was un-guardable,” he said. “She was hitting from the 3-point line as well as her shots in the paint. She put her team on her back. She finished well, used her body to create contact, and made a lot of free throws.” This season started out with an impressive 46-point performance against Ypsilanti Lincoln when she made all seven of her 3-point attempts. While averaging 22.5 points a game, she has increased her rebounding to 11.5 a game and also leads the team in steals, blocked shots and assists. “I think I’m stronger and I jump higher, and I’m playing down low a lot more,” she said of her rebounding. Tuesday, against Hillsdale, Liedel had what might be her best all-around game. She recorded her first ever triple-double with 30 points, 13 steals and 10 rebounds. “I think it was for sure one of my best games,” she said. “I had a good defensive game with a lot of steals.” Erie Mason head coach Josh Sweigert called it one of her most complete games. “That game just shows what a complete player she is,” he said. “Not only did she score 30 points, but she also accumulated 13 steals by being in the right place and using her great understanding of the game to make those plays.” Liedel is the fourth player in Monroe County Region history to pass 1,600 career points. Taylor scored two more points than Whiteford’s Karen Hubbard totaled during the 1970s, and Kiara Kudron also scored more than 1,600 points for New Boston Huron. With at least five games remaining, Liedel is likely to set a new standard that will be hard for any athlete to catch. The Eagles have steadily improved as a team during Liedel’s time on the court, from three wins her sophomore year to a 12-4 record this season. Erie Mason won’t win the Lenawee County Athletic Association crown – Ida has already wrapped it up – but is focused on winning a District. “That would definitely be cool,” she said. “We have a good team and a good chance. We’re really focused on that. It’s been really fun this season.” Liedel has been in contact with some small colleges in Michigan as she considers continuing her playing career. “I for sure want to play at the next level,” she said. “I’m just undecided where right now.” Sweigert has had a front row seat to watch Liedel as the Eagles head coach. He continues to be impressed by her talent and work ethic. “Mary is one of the hardest working players I have ever seen,” he said. “She is the first one in the gym and the last one to leave. She pushes herself and her teammates during practices to be the best that they can be. It would be very easy to be satisfied with where she is due to the success that she has had, but that is just not how she is. She wants to be the best player that she can be.” As for becoming the career scoring leader in Monroe County, Liedel says that isn’t something she’s concentrating on. “I could care less about the stats, or points or breaking records,” she said. “I just go out and try and do everything I can for us to win as a team. I’d do anything for the team.”