EAST LANSING – Detroit Edison girls basketball is back on top.

After having their past two seasons ended without a postseason loss, the Pioneers took back their throne Saturday night with a 73-55 Division 2 Final win against Grand Rapids West Catholic at the Breslin Center.

“Winning a state championship, it means everything to me,” Edison senior Ruby Whitehorn said. “Not getting it the last couple years really has been our motivation to get it this year. All our previous teammates, that’s why it’s so important to me, because they didn’t get the chance to do it.”

The title was the fourth for the Edison program, which won three straight from 2017-19 – the first two coming in Class C and the third in Division 2.

When given the opportunity to finish it on the court again, the Pioneers took full advantage. 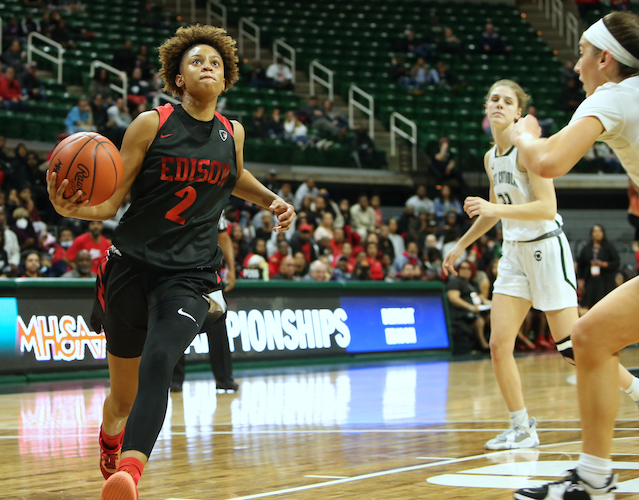 The only two seniors on the Edison roster came up biggest at the end of the third quarter and into the fourth, when the Pioneers turned a tight game into a comfortable victory.

“I would say it was our defense and talking on defense that always brings us back in the game,” Wardell said. “We weren’t down by much, but I know if we talk on defense, it’ll bring us back.”

The defense was led by Dakota Alston, who switched onto West Catholic star Abbey Kimball in the second half. Kimball, a Michigan State signee, scored 26 points in the game, but just seven during the second half, thanks in large part to the move to switch the bigger Alston onto her.

“I just made sure I didn’t let her have the ball,” said Alston, who added 10 points. “Coach (Monique) Brown said the best way to stop a good scorer is to make sure she doesn’t get the ball.”

Kimball noticed the change, and gave credit to Edison (19-3) for making things more difficult for her over the final 16 minutes.

“The first half, obviously I hit shots, got open and my teammates found me,” Kimball said. “In the second half they started to do more face guarding throughout the whole court. That was different. Kudos to them, they had really great defense and it’s tough to score on them regardless.”

The game was back and forth into the third quarter, and West Catholic (25-2) had a 36-35 lead about midway through it.

But with Whitehorn picking up her third foul and getting a quick breather, the Pioneers not only held on, but grabbed a lead they wouldn’t relinquish, thanks to some free throws and a putback by Wardell.

“That was a competitive game,” West Catholic coach Jill VanderEnde said. “I thought we did a really nice job with our gameplan, really attacking Detroit Edison, and showing them that we wanted to come and we wanted to show them our best game. I thought we started out the game very physical and aggressive. Throughout the game we had that effort and tried to stay positive, which was really (a proud moment) for me.” 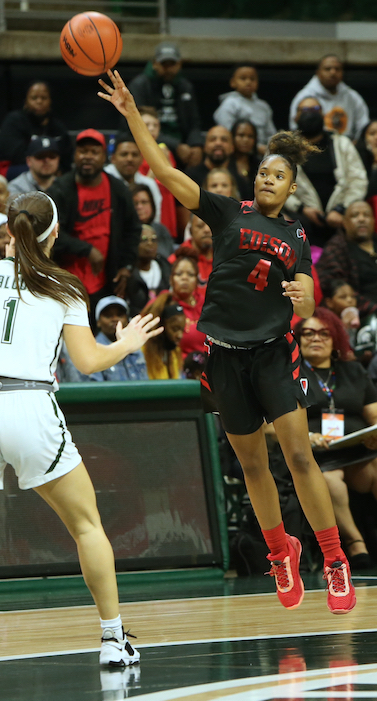 When Whitehorn came back, she took over, with several tough drives to the basket, eventually putting her team up 11 points in the fourth.

Whitehorn is the fourth straight Miss Basketball to come from Edison, following Damiya Hageman, Gabrielle Elliott and Rickea Jackson. What she displayed Saturday was what Edison coach Monique Brown called a combination of all her predecessors, as she also added four assists and three steals to the stat sheet.

“I think Ruby, the last four years, she was able to, first of all, learn from each and every one of those players,” Brown said. “She has something that each one of those players were good at – she has a piece of all of those. She can pass the ball, she can score the ball, she plays good defense, she’s a good slasher. Gabrielle was a good slasher, Rickea Jackson could score, Damiya Hageman can pass the ball. She’s blended all of those three young ladies, and she can do a lot of different things on the court to help us be who we are.”