EAST LANSING – Detroit Edison and Miss Basketball Award winner Ruby Whitehorn will try for the program’s first Division 2 title since 2019 after moving past Ludington on Friday 63-30 in a Semifinal at the Breslin Center.

Edison was felled by the COVID-19 last season, so getting a chance to play at the Breslin meant a little more.

“I was a little nervous because I knew we hadn’t been here in a few years,’’ said coach Monique Brown. “I have a whole new team since the last time we were here. Devin (Hagemann), she has only played 10 games in the last two seasons. To be on the floor where her sister (DeeDee) plays at, I know she was a little nervous. We jumped out a little bit early, but we got a little antsy. We were able to settle down, and overplaying them we were able to pull away from them.’’

Whitehorn came out of the game with six minutes left having scored 18 points, pulled down 12 rebounds and handed out seven assists.

“The past few games I’ve learned to keep my attitude in check and trust my teammates,’’ said Whitehorn. “They have my back. It took me a little while not to get on myself when I wasn’t scoring. I realized that when I get an assist, I feel like I’m scoring. I love to rebound. That’s my big thing. It’s the most aggressive thing for me to do on the court. It’s fun to me. When you get a rebound, you look tough.

“Growing up, it was always a dream to play on Michigan State’s court. I thought since I committed somewhere else (Clemson), I thought I wouldn’t get that chance, but God has a way of making things work out.’’

Shouts of “overrated” by the Ludington student cheering section toward Whitehorn were unfounded. 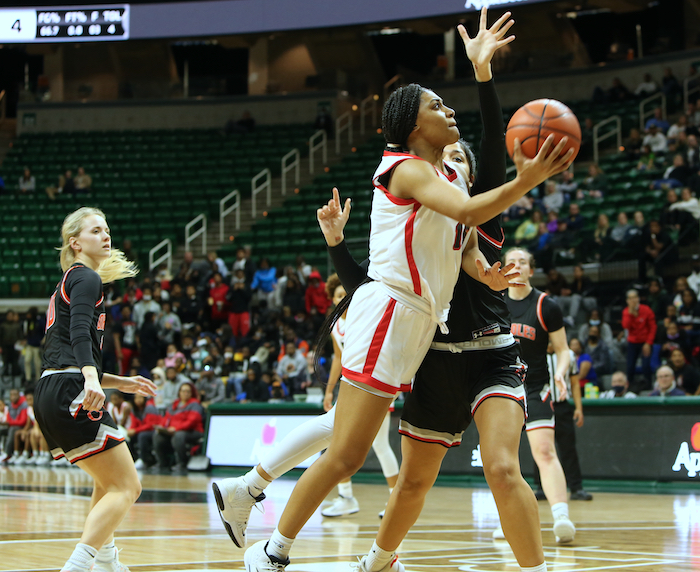 Ludington (20-6) shot 53.8 percent from the field during the first half. But 17 turnovers were the reason they trailed by 13 at halftime despite Whitehorn scoring just four points over the first 16 minutes.

Edison’s quickness was disruptive, forcing the Orioles into bad decisions and 30 turnovers total for the game.

Whitehorn scored four points early in the third quarter, and Edison extended its lead to 39-21.

Edison eventually doubled the score (43-21) on a basket by Myan Cooksey.

“It wasn’t like I thought it would be,’’ Ludington’s Keelyn Laird said about going up against Whitehorn. “She can jump out of the gym. She’s a really, really good player.’’

Edison scored the first 10 points of the game, forcing Ludington coach Warren Stowe to call a timeout with 4:37 left in the first quarter.

“Tough game for us,’’ said Stowe. “We knew we were going to see an immense amount of pressure all night. We did. It’s like a leaky faucet. It’s what we try to do to teams on the west side of the state, put that type of pressure on them. It wears on you.’’

Oliva Lynn finally scored for the Orioles, after Hagemann had drained a triple, to make it 13-2.

Ludington shook off the jitters and got to within six, at 15-9 with 1:41 to go in the opening period, going inside against the Edison defense.

Ludington’s zone started to affect the Edison offense, and when RyAnn Rohrer scored four straight points the Orioles were within 17-14 with Whitehorn on the bench with two fouls a minute into in the second quarter. The 6-foot-3 Laird made her presence felt inside, scoring a rebound basket a minute later to make it a one-point game, 17-16.

Rohrer scored 11 points during the first half and led the Orioles with 15. Madisen Wardell added 10 points and four steals for the Pioneers.