ADRIAN – A new era began Monday in girls basketball at Adrian Lenawee Christian, but no one is expecting different results for the Cougars.

LCS tipped off the season with an early evening practice, holding the first round of tryouts.

Head coach Jamie Salenbien, now in his sixth season leading the Cougars, will eventually welcome back nine returning players from last year’s team that advanced to the Division 3 Regional Semifinal. He has another strong group he hopes to mold into contenders in Division 4 this season.

What he is missing is his daughter, 6-foor-4 Bree Salenbien, a four-time Michigan Associated Press Player of the Year, who is now at Gonzaga University in Spokane, Wash. She scored more than 2,000 points, broke nearly every school record and made her mark on prep basketball in Michigan during an outstanding four-year career, culminating in being named the Gatorade Michigan Player of the Year a year ago.

“It’s going to be a process, like every year,” Coach Salenbien said. “This team will be finding their own identity. They may do things a little differently. We will have that talk along the way. It is a long season – over four months. We’ll get there.”

While it will be hard to miss the talent that Bree brought with her on the court, Salenbien said this year’s team still feels like family.

“I’m so close with all of these kids that it hasn’t felt much different so far,” he said. “It was really exciting to be back out there. We had 11 kids Monday. We still have some volleyball players going strong in volleyball, so we missed them, but they will be here eventually.

“I’m excited. We have the same coaches, five seniors and a lot of experience. Some of these girls have been on the varsity since they were freshmen. We might have to change our approach a little bit, but these girls are talented.” 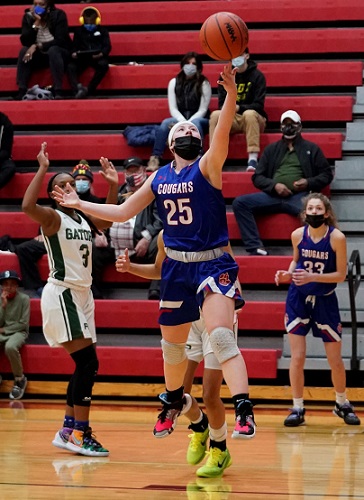 Summer averaged 8.1 points a game last year and Scharer 7.8. Scharer made 23 3-pointers, Anderson, 21, and Summer, 18. Another returning senior, Kelsie Lilly, was second on the team in rebounding. They all bring different talents to the table.

“Obviously, there are some different aspects to this season, some different players,” said Scharer. “We’re different. We have a different style. We are all super thankful for being back on the court.”

Scharer helped the Cougars cross country team place in the top 15 in the Lower Peninsula Division 4 Final last weekend. Now, she turns her attention to basketball, her favorite sport. She is a fourth-year varsity player and hopes to continue in college.

This past summer she played for a couple of different travel teams, taking her to Florida, Kentucky, Indiana, Wisconsin and across Michigan for tournaments.

“I really like playing good competition,” she said. “It helps me be better prepared for anything.”

Playing good competition has been Salenbien’s mantra at LCS. Over the last several years, the Cougars have maintained one of the top schedules in the state regardless of class.

This year’s schedule is no different as LCS will play several larger schools, such as Temperance Bedford, Chelsea, Michigan Center, Onsted, and Brooklyn Columbia Central along with similar Division 4 powers Portland St. Patrick and Lansing Christian.

“I think it helps us,” Salenbien said. “We’re not in a league, so we can go out and play anyone. These girls have been through so many big games, and big practices to prepare for big games. I feel there’s nothing wrong with sort of exposing what your needs are to get better.”

“I think just playing with good talent helps prepare you because you play to the level you are playing against,” she said. 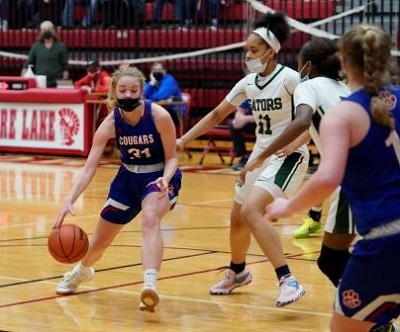 Salenbien is a Hudson graduate who played college basketball at Siena Heights University. He coached Onsted to three straight Lenawee County Athletic Association championships, took a couple of years off as his daughters Dani and Bree honed their skills, then took over at LCS in 2017-18. His first two teams – led by Dani and Bree – went 26-1 and 26-2, respectively, winning back-to-back Finals championships, the first in Class D, the second in Division 4 after basketball switched from Classes to Divisions. The 2019-20 team went 20-3 and reached the Regional Final before the season was suspended due to COVID-19. Last year LCS went 13-4, losing to Ypsilanti Arbor Prep in the postseason.

Salenbien stresses fundamentals, family, and fellowship. No matter who is playing for him on the court, that never changes.

“I love playing for him,” Scharer said. “He is strict, but he knows how to make the game fun. We know when we have to put in the work and when we can have fun.”

“I don’t even think they knew we were practicing,” Salenbien said. “The girls on the team were happy to say hello. It is a nice feeling to know these girls are so connected. We miss everybody who we lose from one year to the next.”

The Cougars open the season later this month. How deep they play in March is something that Salenbien will figure out later. Right now, it is the start of another journey, but one familiar to most of the players on the team.

“That experience and knowledge of how to manage stress and the limelight helps so much,” Salenbien said. “We’ve got some long, athletic kids that can jump right out of the gym and some cross country girls that like to get out and run.

“It will take some time, but I think some really cool things can happen with this group.”