GLADSTONE — During the past four years, Escanaba’s Nicole Kamin and Gladstone’s Megan Crow have been teammates on the basketball court – except for high school games.

The senior standouts have played on the same travel team since eighth grade and will be teammates at Grand Valley State University next season.

They will be on opposing teams one more time tonight when Escanaba visits Gladstone for a Division 2 District opener at 7 p.m.

“I’d be very happy with that,” Crow said of facing off against Kamin, after Gladstone’s recent 57-40 loss to the Eskymos. “This would be our last time playing against each other. I think it’d be kind of fun.”

This will be the third meeting between the teams this season. The Eskymos also won 64-63 at home Feb. 15.

“When we’re shooting free throws, we sometimes throw a little jab in there,” said Kamin. “We have fun, although we get pretty intense when we have to. Once Meg gets the ball inside, there’s no stopping her. I’m not one who should be guarding a post player, but I have to do it. I try to keep the ball from getting to her. This will be the last time we play as opponents, which will be a relief because we won't have to play against each other anymore.”

Crow is aware of the challenges Kamin provides for opposing teams. 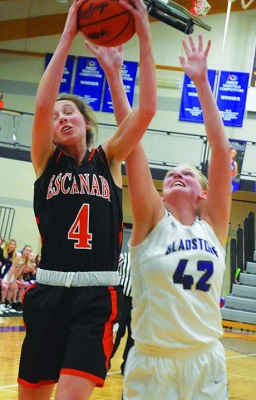 "I don’t guard Nicole, but once she gets past the free throw line, you need help right away,” she said. “She’s hard to defend. Her penetration makes it very challenging.”

Both joined the 1,000-point club recently. Kamin scored her 1,000th career point in this season’s first meeting between the teams, and Crow reached a thousand in a 59-36 triumph over Manistique at home March 11.

Kamin usually plays guard, but was the team's center in a 60-47 victory at Bark River-Harris on Friday. She averages 24 points and nine rebounds a game and figures to be more of a forward at Grand Valley.

Crow recorded a triple-double (16 points, 18 rebounds and 12 blocked shots) in the Braves' 43-24 regular season-ending victory at Marquette on Wednesday.

She expects to be a post player for the Lakers.

"That will be very exciting," said Crow. "Nicole makes good passes, and I make good kick-outs. Playing at the post would give me more freedom. I would be able to post up more and drive to the basket."

Kamin, like Crow, knows she has some work to do prior to her collegiate career.

Kamin scored 21 points in Thursday's 71-27 rout of Kingsford, then often distributed the ball and hit 14 at BR-H.

Esky finished its regular season at 10-4 and Gladstone is 8-5 going into the postseason.

Both like to go to the Northern Lights YMCA in Escanaba and play ball with other girls.

"I also like to work out at home and go to the shooting range in my spare time," said Crow.

Kamin played on two Division 2 championship softball teams at Escanaba before last season was cancelled due to COVID-19. She was a back-up pitcher to current University of Wisconsin hurler Gabi Salo, but figures to play first base for the Eskymos this spring.

PHOTOS: (Top) Gladstone’s Megan Crow and Escanaba’s Nicole Kamin both have been standouts in the Great Northern Conference and will be teammates at the collegiate level. (Middle) Kamin and Crow face off last season. (Photos courtesy of the Escanaba Daily Press.)