Gladstone’s Claire van Ginhoven is very close to that from the free throw line, where she’s cashed in on 40-of-42 shots through her first six games this season.

The senior guard had sank her first 28 before missing her last one in a 53-42 victory over Kingsford on Dec. 14.

“I definitely work on that a lot and improved a lot from last year, although I’m more of a 3-point shooter,” said van Ginhoven, who has qualified for the Basketball Coaches Association of Michigan free throw competition at this winter’s MHSAA Finals. The top 10 free throw shooters in the state are invited to be part of the field.

She also was connecting on more than 40 percent of her 3-point attempts through the team’s first five games. 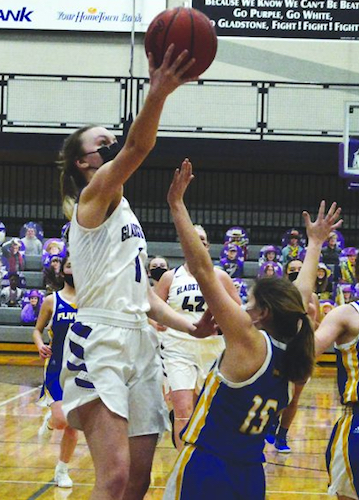 “I’m able to drive more to the hoop this season. Running our offense is giving me and my teammates more opportunities to score,” she said. “We run a weave, and I think our rotation works well.”

Coach Andy Cretens is impressed with van Ginhoven’s play this season. She opened with 38 points against Gwinn and is averaging 19.8 ppg.

“Claire has ability to score from anywhere on the floor,” he said. “She changes the dynamics of our offense and forces opposing teams to change their game plan. Last year was the first time Claire was asked to be a leader. That was a great learning experience for her, but she became a stronger player by having to handle adversity.

“Claire is a late bloomer. She’s nowhere near her peak yet. She has a lot more development to go.”

The 5-foot-9 standout played at Bark River-Harris as a freshman before transferring to Gladstone as a sophomore.

She plans to continue her basketball career at Finlandia University in Hancock next winter. Cretens believes college ball will be a good experience for van Ginhoven.

“That helps keep players motivated because they have something to look forward to after high school,” he said.

“I think Claire raises the level of competition for us and motivates the other girls to put more time into their game. She’s a good role model for our younger girls.”