EAST LANSING — Though it may very well look like a fun play on words, Grass Lake girls basketball coach Andrea Cabana has established quite a culture in the small town located just east of Jackson.

And it’s really beginning to pay off.

“It’s a grass-root, fundamental approach to changing the overall culture of the program,” she said. “We’re very in-tune to the younger kids in the Junior Warriors (program), throughout the middle school to JV and varsity. It’s a full program effort to keep everyone involved.”

On Friday, she and her Grass Lake team took another step in keeping everyone involved, capturing the school’s first girls basketball state championship. The Warriors overcame an early seven-point deficit and held off a late charge by Kent City for a 52-50 victory in the Division 3 Final at the Breslin Center.

Trailing by 10 points with just more than five minutes remaining in the game, Kent City went on a 10-2 run to nearly dissolve Grass Lake’s lead. Seniors Kenzie Bowers and Jenna Harrison hit back-to-back 3-pointers to get their team within four points at 46-40. After a Lauren Pongracz layup put it back to a six-point advantage for the Warriors, Harrison hit another 3 and Bowers hit one of two free throws to make it a 46-44 game, in favor of Grass Lake.

The two teams would trade baskets before Grass Lake junior Lexus Bargesser hit a pair of free throws with 35 seconds remaining to give her team a four-point lead. She added two more with 10 seconds left to essentially seal the victory for her team.

“I feel so proud of our team and how we pulled through and didn’t let the pressure get to us,” Bargesser said. “Truly, this is the best thing that any basketball player could imagine happening to them. To be able to go and say you won a state championship is truly such a blessing.”

Kent City entered the game unbeaten at 21-0 and jumped out to early leads of 16-9 and 21-17 thanks in part to its 3-point shooting. The Eagles shot nearly 40 percent from beyond the arc, hitting 11 of their 28 attempts. 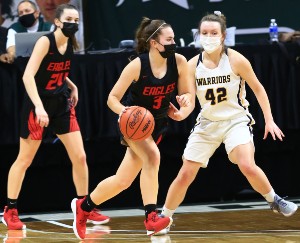 “The girls executed the game plan absolutely perfectly,” Kent City head coach Scott Carlson said. ”We wanted to take away (Bargesser) and (Cabana) and we did that in the first quarter, the first half really. But they had some players hit some shots that we were going to make them shoot.”

Bargesser finished with 16 points and 10 rebounds and Cabana had 10 points to go along with her five rebounds. Junior Gabrielle Lutchka hit four 3-pointers and scored all 14 of her points in the first half.

Harrison led Kent City with 16 points, while Bowers chipped in 13.

“We had a great season,” Carlson said. “These girls played absolutely fantastic. They overcame a lot and worked their tails off all offseason on their own when we couldn’t get together. I couldn’t be more proud of them.”

For Grass Lake, the championship is a culmination of five years of growth in the program, a program which Coach Cabana took over five years ago. The Warriors faced one of the toughest schedules in the state this season, which helped prepare them for Friday.

“We intentionally had a very tough schedule this year,” said the coach, who now has a 95-18 record in five years with the program. “Our philosophy is we want to see the best. We want to see how good we are. We want to be pushed to our limits. Teams like that will expose every weakness that you have. So we were able to work on the things that needed to be adjusted before big games like this.”

Grass Lake also captured its first Regional title this year, having fallen just short a couple of times under Cabana.

“Our program has definitely been on the rise the past couple of years,” Lutchka said. “We had a team make it to the Regional Final and (it) ended up not winning, so we’ve been trying to get past that point. Every year, we’ve gotten better and better and better.”

And this year, the Warriors reached the basketball summit.

“It’s huge for the girls within the program, something to build on and keep focusing on,” Cabana said. “It’s huge for the district. We’ve never won a basketball state championship at Grass Lake, and I think it’s huge for the community. We’ve had people who graduated a long time ago show up and give us their support. The amount of people who have reached out wishing us luck is astronomical. It will (someday) become a basketball town. We’re working on it.”