GRAND RAPIDS – Nothing could wipe the smiles off the faces of the Saginaw Heritage players and fans Saturday – not even a trophy to the head.

“Did you see our fans today? They’ve been out in full force all weekend long,” Heritage coach Vonnie DeLong said. “We’ve got a kid that’s been probably at every game and just split his head open on the trophy in the celebration, like he’s bleeding, our trainer is having to tend to him right now – I don’t know if he needs stitches or what. But, he’s got a smile on his face. He’s loving it.”

There was plenty to love for the Hawks at Van Noord Arena as they rolled to a 57-36 win in the MHSAA Class A championship game against East Lansing.

It was the first MHSAA title since 2002 for the Hawks (27-1), who were making their third appearance in the championship game.

Heritage used a balanced offense and dominant efforts on the glass and at the defensive end of the floor to hand East Lansing its first and only loss of the season.

“They were moving on the flight of the ball, which is really good in the 2-3 defense,” said East Lansing senior and 2018 Miss Basketball winner Jaida Hampton, who finished with six points. “They got to where we were on the passes, and they were not allowing (passes into) the middle of the zone. It was open, but when you got there, they were tipping it, so they were just moving really, really well.”

East Lansing was held scoreless for a span of 7 minutes, 40 seconds during the first and second quarters, which allowed Heritage to initially put some space between the two teams. The Hawks took a 13-point lead into the break, and while East Lansing was able to get within nine in the second half, it couldn’t score consistently enough to fully mount a comeback. 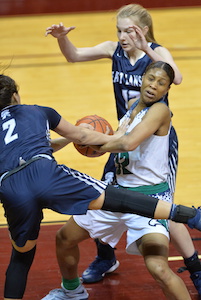 It was the third time this season Heritage had broken out the zone defense, according to DeLong, who said she wanted to counteract East Lansing’s speed.

“I thought they were pretty quick for us, and we’ve traditionally played a lot of zone, but this year we played almost all man,” DeLong said. “I thought in our zone, it just gives us a different look, and it’s a struggle, I think – you might have seen that today with East Lansing – it was probably a little bit of a struggle for them to attack it.”

On the other end, Heritage had four players in double figures, and the one starter who wasn’t was Moira Joiner, the leading scorer during the season. She added six assists and nine rebounds to her four points.

A good chunk of those points followed offensive rebounds, as the Hawks had 15, compared to 14 defensive rebounds for the Trojans. Heritage had a 43-23 rebounding edge overall.

“We are a team that doesn’t have a lot of size; it’s a necessity for us to box out to win games,” East Lansing coach Rob Smith said. “Tonight, we were victimized 43 times on the boards to only our 23. You’re not going to win too many basketball games in that situation. I gotta say, the Strickland kid there, she was just really, really good tonight. She was very, very tough down low, and we just didn’t have an answer for her.”

The secret for Strickland-Gills’ performance was a simple one – work hard.

“I don’t really expect it, I just kind of come out and I go hard,” Strickland-Gills said. “Most people would say I’m a defensive player, and that’s what I like to do; it’s effort. That’s all it takes to get 12 rebounds is effort. I know my teammates will get me to score, so I don’t really worry about that. My thing is just to play defense.”

Aaliyah Nye led East Lansing and all scorers with 18 points, all coming on 3-pointers as she was 6 of 10 from behind the arc. No other Trojan scored more than Hampton’s six.

“I’m so proud to be the coach of this fine program, and most importantly these wonderful ladies that are sitting next to me and the other 11 that are in the locker room right now,” Smith said. “I know they’re disappointed with the outcome today, but the body of work is truly amazing.”