But she also has three starters back from the lineup that made the Class A Semifinals a year ago – and the Hawks' sights are set on contending again this March.

Heritage is the Applebee’s Team of the Month for December thanks to a 6-0 start that included a key Saginaw Valley League North win over Midland and ended with a 39-29 victory over reigning Class B champion Detroit Country Day in the marquee game of the Motor City Roundball Classic.

“The expectations from the kids’ perspective are very high,” DeLong said. “They want to win. They want to get back to the Breslin. With as many kids as we had coming back, and with what we added, it’s a realistic goal for them – but they know it's going to be hard to do.” 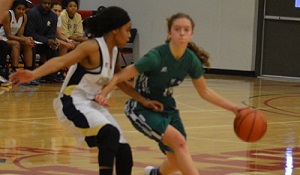 Heritage has beaten all of its opponents but one by at least 10 points, downing Flushing by only nine, 36-27, on opening night. Five of seven players who saw the floor in the Semifinal loss to DeWitt last season are back, including returning starters Jaela Richardson, Haley Brefka and Courtney McInerney. Richardson is a sophomore; Brefka and McInerney are juniors. Senior center Jenna Falkenberg and sophomore guard Jessi Bicknell both also played at Breslin last March.

But the lineup, while experienced, is paced in scoring by a pair of freshmen. Mallory McCartney and Moira Joiner lead the balanced offensive effort averaging 9.6 and 8.3 points per game, respectively, with Joiner adding 7.2 rebounds, 4.2 assists and three steals per game and McCartney grabbing 2.5 steals per contest.

Richardson grabs 7.2 rebounds to go with 7.3 points per game, while Bicknell averages 6.4 points and 2.5 steals and McInerney grabs six rebounds per game.

The Hawks also are giving up only 23 points on average. No opponent has scored 30. Country Day's 29 points were their fewest since scoring 30 in a Quarterfinal loss to Flint Powers Catholic in 2013.

“Country Day is so good, and every year; they’ve just been phenomenal,” said DeLong, who also coached at Saginaw Valley State University and played at Notre Dame and Michigan. “For our kids to get a win like that, against such a good team, it’s huge. Especially for the young kids.”