EAST LANSING — To say Hudsonville’s Jaci Tubergen and Alaina Diaz were locked in during Friday’s Division 1 Final would be an extreme understatement.

One of them went on an 11-0 personal run, while the other had ice water in her veins during a three-minute stretch that helped her team fend off Detroit Renaissance, 65-61, to capture the first girls basketball state championship in Hudsonville history.

Tubergen broke open what had been a tie game just minutes earlier. The junior took a pass from senior Ashlynn Bailey and drilled a 3-pointer from the wing to give her team a five-point lead with 4:37 remaining in the first half. On their next possession, the Eagles once again found Turbergan open, this time from the opposite wing. She hit another 3-pointer to push the lead to eight. A traditional three-point play and baseline jumper by Tubergen capped off a personal 11-point run to push Hudsonville’s lead to 47-34.

“To see shots go in, it’s a good feeling,” said Tubergen, who finished with a game-high 28 points. “Alaina handling the pressure as the point guard and other girls attacking and kicking (out), they got me pretty open. I’m lucky to have teammates who are willing to drive in and draw the defenders, leaving people open on the wings.”

Tubergen would finish with 16 points in the third quarter alone, as the Eagles saw a one-point halftime lead balloon to 14 points heading into the fourth.

But Renaissance, which battled back from a big deficit in Wednesday’s Semifinal against Wayne Memorial to make it to Friday’s Final, wasn’t finished. The Phoenix scored the first 12 points of the fourth quarter to cut the Eagles’ lead to two points at 54-52. Senior Shannon Wheeler had three steals and senior Mikyah Finley had two herself during the run to help their team get back into the game. Senior Kailee Davis had five of her team-high 26 points over that stretch.

“They did a great job of mixing up defenses,” Hudsonville head coach Casey Glass said. “I think when you play in the moment like that, you let one thing lead to another. The big thing for us was to weather the storm. We knew that they were going to apply pressure. We knew there were going to be spurts in the game.”

The Eagles certainly did weather the storm. Moments after missing the front end of a one-and-one, Diaz calmly stepped back up to the line and sank a pair of free throws which gave her team a 56-52 lead with 2:44 to play. Those were the first points of the fourth quarter for Hudsonville.

Diaz wasn’t done. She would go on to make six more free throws without a miss to help her team pull out the victory. 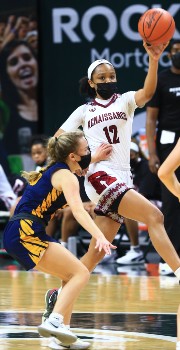 “I’m just used to the pressure because at practice we usually have pressure free throws and I’m just thinking that I have to do it for my family, my teammates,” said Diaz, who finished 9 of 10 from the line. “I’ve got to do what I’ve got to do.”

Renaissance would make another late push, but came up short. The Phoenix were just 18 of 30 from the free throw line.

“The press eventually starts to get to you, and it eventually started to get to them,” Lawal said. “I just think that we had a few chances after they turned it over (to us), or when we kind of got them to take a rushed shot that led to a rebound and fast break, we weren’t able to convert like we did Wednesday (against Wayne Memorial). I think that’s the biggest difference.”

And he did touch on his team’s missed opportunities at the line:

“I’m not going to give coach (Greg) Kampe credit for this quote, because I’m sure he stole it from someone, but he said, ‘Two things in this world that don’t last, dogs that chase cars and teams that don’t make free throws.’ We didn’t make free throws, so we didn’t last. We got away with it Wednesday against Wayne Memorial. God said you’re not going to get away with it twice.”

Finley finished with 13 points and Wheeler added nine points and eight rebounds for Renaissance, which finished 13-5.

Hudsonville capped off a magical season which saw it finish 23-1. Diaz ended the day with 15 points and seven rebounds, while junior Eva Joldersma had four points and 11 rebounds in her team’s win.

“Going into tonight, I said to myself, ‘I’m the luckiest coach in the state of Michigan,’ ” Glass said. “I’ve gotten more time with my team this year, being in a state championship (game), than any other coach. When you coach, you’re looking for how much time you can spend with your players, or how much impact you can make as a coach. Our team has always been like family. We play together, we push each other.”