EAST LANSING – Kent City has overcome every obstacle this season, and Friday the undefeated Eagles will play Grass Lake for the Division 3 girls basketball championship after defeating Calumet 59-53 in a Semifinal on Wednesday at the Breslin Center.

Grass Lake (19-1) advanced to Friday’s championship game when Hemlock opted out of the tournament Wednesday morning. Both Kent City and Grass Lake will be playing in a Final for the first time.

The Eagles (21-0) opened up an 11-point lead to start the fourth quarter Wednesday and held on despite the Copper Kings getting to within 54-50.

“We just had to take a deep breath and relax,’’ said Harrison. “We knew eventually the shots would start falling.’’

“She kept us in the game; she played her heart out,’’ said Calumet coach Matt Laho. “We needed to have a couple more players go with her, but unfortunately that didn’t happen.

“We had some defensive breakdowns in the third quarter, some bad rotations. It’s easy to make shots when you’re wide open.’’

Kent City pressured Calumet from the start as both teams struggled offensively in the first quarter. Both teams were under 25-percent shooting over those first eight minutes as the teams managed just 14 points for a 7-7 tie. 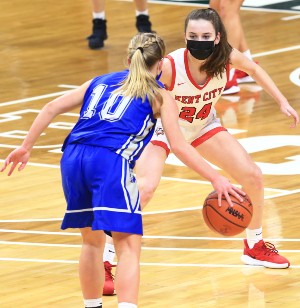 Geers, who scored four points in the first quarter, picked up her second foul with 9.8 seconds left in the period. Calumet then went on an 8-3 run to start the second quarter, using a triple from Djerf to take a 15-10 lead and force Kent City coach Scott Carlson to call a timeout.

Consecutive 3-pointers from Lexie Bowers got the Eagles back to within two of the lead, 17-15, as the offenses heated up.

A 10-0 run including consecutive threes from Bowers gave the Eagles a 24-19 advantage. But Djerf scored the last three points of the quarter to get the Copper Kings to within 24-22 at halftime.

Strom and Djerf scored the first six points of the third quarter to give Calumet a 28-24 lead, but Kent City’s offense, led by Geers, responded with a 20-9 run to take a 44-37 lead on a triple and floater by Kenzie Bowers.

Harrison finished the frantic quarter with a triple to give Kent City a 49-41 lead heading into the final eight minutes.

When Geers scored to start the fourth quarter, the Eagles had their largest lead of the game, 51-41.

“We have enough ball-handlers to run clock for five minutes.’’ said Carlson. “They were tired, and playing defense that long wears you out.’’

Lexie Bowers led Kent City with 10 points while Marybeth Halonen had seven for the Copper Kings.

“We’re living the dream right now on the big stage,” Carlson said. “I think it’s a huge advantage for us having played today (while Grass Lake didn’t).’’