GRAND RAPIDS – As daughter of the coach and sister of the star, sophomore Dani Salenbien was in unique position to forecast the success of this season’s Adrian Lenawee Christian girls basketball team.

She knew one thing for sure.

“I know we can do anything when we play together,” Salenbien said. “We’re fighters and we haven’t stopped fighting this whole season, so I’m proud of every single one of them.”

Two days after freshman sister Bree sank a last-second overtime shot to send their team to the championship game, Lenawee Christian won it. The Cougars caught fire during Saturday’s second half to claim their first MHSAA girls basketball title with a 57-36 win over Chassell at Van Noord Arena.

Lenawee Christian previously had finished Class D runner-up in 2010 and was making its first trip to Finals weekend since that title game run. The Cougars capped a season that saw them finish 26-1, with their only loss by one point to Class A Monroe.

They had only one senior on the roster, and 51 of their points Saturday were scored by Bree Salenbien or sophomores.

“Three or four weeks ago, we started hitting our stride a bit,” said Lenawee Christian coach Jamie Salenbien, who’s also Bree and Dani’s father. “And I told Coach, ‘Wow, something good is happening.’ They’re jelling well, the chemistry’s good, they’re sacrificing for each other, and to boot we were getting a lot of progress as far as the skill level goes – shooting, ball handling and passing. It all got crisper.

“And we peaked at the right time, so we’re just really thankful for that.”

Leading by a point at the break Saturday, Lenawee Christian went on a 19-7 run over the final 7½ minutes of the third quarter to build a 13-point lead. The Cougars then held Chassell to only four points – on 20 percent shooting – during the fourth quarter. 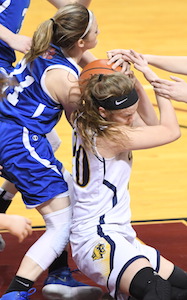 Bree Salenbien, the team’s leading scorer this winter at more than 21 points per game, left the floor briefly during the first half after twisting an ankle. The 6-foot-2 guard finished with 20 points and 11 rebounds – and despite hitting only 7 of 21 shots from the floor. She disrupted Chassell’s defense just by being out there and opening up space for teammates.

“We kinda let her control a little bit of the second half. I felt like we scrambled a little bit, over-helping and not getting back where we needed to be – we had too much help and not enough on-the-ball defense,” Chassell coach Brandi Hainault said.

“I felt we had momentum from the first half into the second half. They hit some big shots, and we weren’t hitting ours, and eventually you dig yourself a hole.”

Chassell was making its first MHSAA championship game appearance in girls basketball and first in either girls or boys since 1958.

“They’ve done something no other Chassell team had done,” Hainault said. “They’re a team that deserves to be here, and I couldn’t be prouder of what they’ve done.