GRAND RAPIDS – It took a couple years, but the wait was worth it for Fowler's girls basketball team.

Fowler junior guard Mia Riley said her teammates had not forgotten a 57-36 Quarterfinal loss to Adrian Lenawee Christian in 2019, a loss which capped a 17-win season. The players used that memory to pound their way into their first Girls Basketball Final since finishing Class D runner-up in 1999.

"We've been waiting, just itching to get back,"  Riley said. "It was always in the back of our minds, and now it's just a great feeling."

The win snapped a 22-game winning streak for Carney-Nadeau, which had won its previous five tournament games by an average of 19 points per contest. No team had come as close as eight points to beating the Wolves this season.

The win sent Fowler (15-4) into Friday's 10 a.m. Final against Bellaire at the Breslin Center.

Eagles coach Nathan Goerge said there was little to complain about after his team forced a whopping  31 turnovers, including 16 in the first half. That defense, which featured five players with at least three steals, was largely responsible for Carney-Nadeau attempting 28 fewer field goals (59-31). 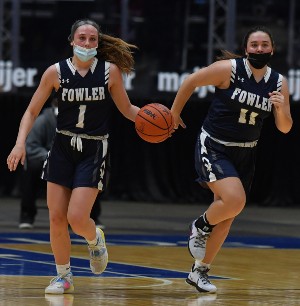 "The execution was absolutely awesome. We had some breakdowns, but none that really hurt us," Goerge said. "We're a tough team to beat when we spread the floor and make shots. We always tell the girls when you have a shot, it's going up. We have a lot of good shooters on this team."

Fowler overcame missing its first nine 3-pointers to land three players in double figures while shooting 37 percent (22 of 59) from the floor.

"We've handled the press well, but this was something new for us," Kedsch said.

Wolves coach Ken Lindor said the turnovers made it difficult for the team to sustain much consistency on offense.

"We just really struggled with their pressure," Lindor said. "They pushed us out on offense. We were okay shooting the ball (48 percent), but we had too many unforced turnovers that we don't normally make. We just couldn't get in a flow. They had good ball pressure and took away the passing lanes. We didn't move as well as we usually do; there was a lot of standing around.

"We haven't been this far in 20 years, and one of our goals was to get here,” he added. “We met that goal, and that was pretty special."