But key contributions from her teammates also helped pave the way in a 57-44 victory over Maple City Glen Lake.

“One of the TV reporters asked me before the game what one player did I need to score for us to win the game, and I didn’t have an answer,” Gators coach Scott Stine said. “Mya can score 12 and we can still win this game, because every night somebody steps up. We’re really tough to guard because any of the girls in the rotation can score.”

Petticord, a Miss Basketball Award finalist who will play next season at Texas A&M, scored a game-high 20 points, only three below her average, despite shooting an uncharacteristic 5-of-18 from the field – entering this week she was connecting on 52 percent of her shots. 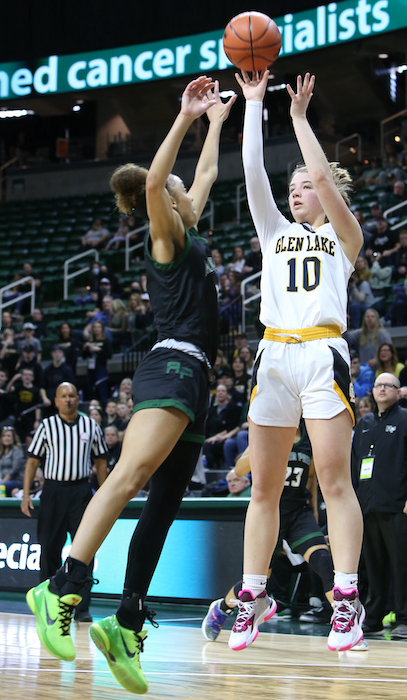 “I didn’t feel like I had to score for us to win, not at all,” Petticord said. “I feel like all my teammates have scoring abilities.”

Stephanie and Stacy Utomi combined for 14 points and 17 rebounds, while sophomore Taylor Wallace pitched in with eight points and two steals.

“Stacy from the tip rebounded for us and brought energy,” said Stine, whose team was making its first appearance in the Semifinals since 2019. “Her and her sister are tough, and they live in the gym.”

The Gators’ defense forced 11 first-half turnovers as they led 26-21 at the half before pulling away in the third quarter with an inspired 12-0 run sparked by defense and 3-point shooting.

Wallace drained a pair of 3-pointers from the corner to make it 34-24. Ensuing layups by Jazmin Chupp and Woods pushed the lead to 38-24.

“We were a little bit nervous and rattled to begin the game,” Stine said. “We were fumbling the ball and missing defensive assignments, and our shooting was uncharacteristically terrible in the first half. But we weathered through it and played a little more like Arbor Prep is supposed to play.”

Glen Lake cut the deficit to 51-41 with less than three minutes remaining, but Petticord went 6-for-6 from the free throw line down the stretch to seal it.

This was Glen Lake’s third trip to the Semifinals over the last six years, but first since 2018.

“We knew it was going to be physical coming out, and the biggest thing was if we could get past that trap then we would be fine, but we had a hiccup there not being able to get through and take care of the ball,” Glen Lake coach Jason Bradford said. “We struggled setting up our offense due to their pressure.”

The loss was only the second for Glen Lake over the last two seasons.

“Every one of these girls have been together since the third grade, and that’s a special thing,” Bradford said. “They step on the floor and they know what the meaning of winning is, and this team leaned on each other.”