EAST LANSING – There’s pressure, and then there’s the expectation Bloomfield Hills Marian had for this season.

Nothing less than another Class A championship would suffice for a team returning four starters from last year’s title run.

It just so happens the Mustangs are especially good under pressure – and exceptional at the Breslin Center.

Top-ranked Marian ran its Breslin Finals winning streak to four and championship streak to two Saturday with a 51-37 win over No. 4 DeWitt.

“I feel like it’s the big stadium. I know there’s a lot of pressure to perform well, so I want to go out there and try my hardest,” said Marian sophomore guard Samantha Thomas, who has averaged 14.2 points in four Finals weekend games over the last two seasons. “I try to do that every game, but I guess I just do it more at Breslin.

“Sam’s a real people pleaser. She wants everyone to be happy,” Marian coach Mary Cicerone added, “and she knows we were counting on her big-time today.”

Total, the Mustangs have now won six girls basketball championships – tying with two other schools for second-most in MHSAA history. Their seven appearances in MHSAA Finals are tied for fifth-most among girls basketball programs.

They looked more than comfortable after the opening tip this time. Marian (25-1) scored the first 10 points of the game and held DeWitt without a point until the final 28 seconds of the first quarter. 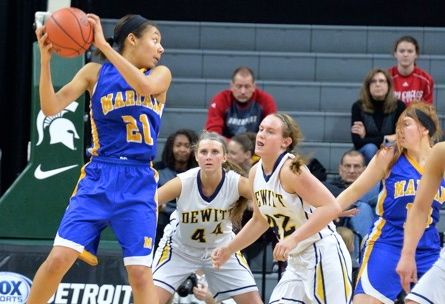 But it wouldn’t be that easy the rest of the afternoon.

The Panthers (25-2), playing in their first MHSAA Final since 1977 and only a 10-minute drive from home, were led by five seniors who all had spent at least three seasons on varsity. They wouldn’t fold quickly.

Twice more Marian built a lead. Twice more the Panthers fought back, taking their final lead at 32-31 with 6:54 to play. But they couldn’t withstand a final rush by the Mustangs and the Thomas sisters in particular.

“It just says that we never want to give up,” DeWitt senior guard Claudia Reid said. “Even though it was a hard loss for us, it was a great journey we went on. We went on it together, and we’ll always remember this.”

Marian outscored DeWitt 20-5 the rest of the way. Samantha Thomas had four of those points and junior sister Bailey scored nine despite both playing with four fouls. The Panthers made only one of 10 shots during those final seven minutes.

“I got my fouls pretty early, so I was sitting on the bench for a long time and it’s hard to watch knowing you’re in foul trouble and can’t play,” Bailey Thomas said. “But once I got to go back out there I was going to give it all I’ve got because I didn’t want to be back on the bench.”

Samantha Thomas finished with 17 points and five steals, while Bailey had 12 points, although both played only 18 minutes. Senior guard Kara Holinski picked up some of the scoring load with 10 points, and senior forward Brittany Gray had seven points and eight rebounds.

Reid had 12 points and four assists for DeWitt, and George added 10 points and 10 rebounds. Junior forward Summer Ward hit a pair of 3-pointers off the bench for the second straight day and finished with 11 points and six rebounds.

Gray, Holinski and senior guard Jaeda Robinson all played on the Marian varsity as freshmen and were part of the program’s only losing season since 1986. But they finished that winter with a District title and went a combined 68-7 over the last three.

“They came every day to practice hard. They worked. Thanksgiving Day, ‘Can we come in and have practice? And I said I’ve gotta cook, so we came in early,” Cicerone said. “When we look at their picture on our gym wall, I’m going to tell everybody that if you want to get back there, you’ve gotta work. These kids were the epitome of what hard work and dedication are about, and that’s their legacy.”