EAST LANSING — Sal Konkle couldn't hold back the tears as she watched her Marshall basketball players celebrate the fulfillment of a dream that appeared to vanish 35 years ago.

Konkle was a star senior on the only other Marshall team to play for an MHSAA championship, but she was on the losing end of a 64-52 decision to Okemos in the 1981 Class B title game.

In almost every case, that's where the dream ends. A once-in-a-lifetime opportunity comes and goes. High school athletes move on with the rest of their lives, but can have lingering regrets about the championship that got away.

The first step toward redemption for Konkle occurred back in 1999 when she became Marshall's head coach and won her first 23 games. But 11 District championship teams in her first 15 seasons couldn't take it all the way.

Her 16th season proved to be the sweetest, as Marshall beat Grand Rapids South Christian, 51-42, in the Class B championship game Saturday night at the Breslin Center.

"I got numerous texts from former teammates saying we can do it," Konkle said. "One is in the stands. She called me this morning. She said to me, 'Hey, I know you're busy, and I'll be there, but not a lot of people get do-overs in life, and you got a do-over. So, can you just make this happen?' I got a text from coach (Tom) Duffey, who was my coach at the time. He said, 'Second time's a charm; you've got this.'"

Making the championship even more special for Konkle is she was able to achieve it with her 14 daughters — her actual flesh and blood, junior guard Jill Konkle, and 13 other girls she regards as adopted children.

"They're kind of all my girls," coach Konkle said. "When you grow up in a small town, these kids are over at your house. Jill hangs out with them. They go to proms. They do everything together. That's what makes it so special for us. These kids are close. This is something they're going to remember the rest of their lives. I remember doing it with my best friends. It's just very, very special."

Jill Konkle said her mother doesn't bring up tales of her glory days or the opportunity that got away in 1981 often, but the topic came to the forefront more in recent weeks as the current group of Marshall players chased that elusive championship. This year's team and the 1981 squad are the only ones from Marshall to get past the MHSAA Quarterfinals.

"Only because we got this far did we talk about it more," said Jill Konkle, who scored a team-high 13 points against South Christian. "Other than that, not as much. She did bring it up with the team a bit. We talked about it the last couple of weeks quite a bit. I was always telling her, 'I'm gonna get it. I'm gonna beat you,' and I did."

Marshall won the Class B title with a group of girls who have played together since their early elementary school years. It was back in those formative years that they became acquainted with the woman who would coach them to a championship as teenagers.

"We all have this respect for her," said Emily Delmotte, the only senior on the team. "I've had it since I was little, watching her teams since I can remember. She's always been a presence. It's not like the kind of coach that as soon as you get into high school is the first time you meet her. In basketball, the first time I met her was in first or second grade. She makes herself present. She's a part of the program, no matter what age you are." 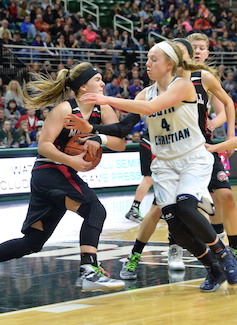 Coach Konkle's pregame message to her team hinted at the lingering pain of that 1981 loss.

With the largest cheering section of the weekend in their corner, the Redhawks took the lead with 2:01 left in the first quarter and never relinquished it. Marshall built a 12-point lead late in the first half before taking a 25-15 advantage into the break.

When Nicole Tucker scored on the fast break with 4:24 left in the third quarter, Marshall had its biggest lead of the night at 33-19.

South Christian, which had three seniors who played on the 2014 MHSAA runner-up team, battled back. A basket by Mariel Bruxvoort with 6:44 left in the game cut Marshall's lead to 37-32.

The Redhawks responded with a 5-0 run, all from the free throw line, to go up 42-32. What could have been a key moment for the Sailors came when Markayla Vander made a free throw and missed the second one, only to have Bruxvoort score off an offensive rebound and get fouled. When Bruxvoort made the free throw, South Christian had four points in a one-second span to get within 42-36 with 3:38 left.

The Sailors didn't get a chance to build on that momentum, as Taryn Long made a 3-point play with 3:10 left to put Marshall up 45-36. South Christian couldn't put together consecutive scores the rest of the game.

"It took us a little while to get into an offensive flow," South Christian coach Kim Legge said. "Actually, I'm not really sure we did get into an offensive flow. Marshall did a good job with their defense on us. Obviously, they had scouted well. We've been behind before and usually can make runs, but they did an excellent job of stopping that. The momentum never did swing to our favor."

Taryn Long finished with 10 points and Carlee Long had five assists for Marshall (26-1), which won its final 26 games after a season-opening 40-33 loss to Williamston.

Vander had 16 points and Jennifer DeBoer 13 for the Sailors (25-3), who had only four players score. Vander, DeBoer and Sydney DeYoung were the only holdovers from the 2014 South Christian team that went into the Class B title game with a 26-0 record before losing to Eaton Rapids.

"It's definitely been a fun four years," DeBoer said. "I've enjoyed every second of the experience. I think the thing I'm going to miss the most are my teammates and all the memories we made. I'll never get these experiences back, so I'm just really thankful for them."

PHOTOS: (Top) Marshall players storm the floor while coach Sal Konkle, far left, covers her face for a moment after her team had clinched the Class B title. (Middle) Jill Konkle works to hold onto the ball with South Christian’s Jennifer DeBoer (4) trying to gain possession.