Since she first stepped onto the hardwood more than a decade ago, Aaliyah McQueen has felt at home on the basketball court.

The sport has helped get her through the toughest time in her life, develop some of her greatest friendships, and opened the door to a bright future.

So, while the Flint Carman-Ainsworth senior juggles the excitement of starting her college career at University of Illinois this coming fall, and the nerves that come along with leaving her geographic home – the presence of basketball helps keep her calm.

“I think it didn’t hit me until a couple days after my signing, that this will be the last time coming to my high school, having practice with my teammates and seeing familiar faces every day,” McQueen said. “I won’t really be home with my family – I'll be a long way from home – and basically I’ll be on my own. But that’s why Illinois was the perfect fit for me. Not only (Illini assistant coach and Flint native Tianna Kirkland), but just the people around there. The weather is colder, too, so it’s kind of similar. But I feel like I’m going to be OK as long as I’m playing basketball. It keeps me mentally sane.”

It was basketball that helped McQueen deal with tragedy at a young age. After the death of her father in 2007, McQueen’s mother signed her up for basketball to help her focus on something positive.

“When my father died, there wasn’t really anything for me to do,” McQueen said. “It’s a pretty dangerous city around where I’m from, and my mom didn’t want me to follow in any bad footsteps because I was grieving. I was already talented a little bit. I was kind of better than some of the kids and I was like, ‘Maybe this might be something.’”

It clearly was, and by middle school, McQueen made the jump to AAU, playing for multiple teams and traveling the country to put her skills on display against strong competition and in front of myriad college coaches. She said her first contact with a college coach came during sixth grade.

“At the time I was younger, so I was like, ‘Wow,’” McQueen said. “I was in shock. I was really happy. It was like, ‘Maybe I am good.’ I never really was like cocky or anything about myself, but I had never really thought I was that good. Once you see the results, that tells you you’re doing something right, and at that time I thought that I needed to keep doing what I’m doing.”

McQueen’s high school career actually started at Goodrich, where she transferred to in eighth grade. She came back to Flint after her freshman year, however, as it felt more like home. 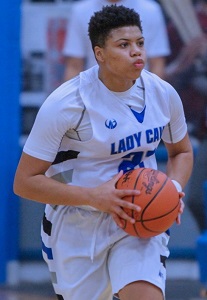 “Me coming to Carman, I think, might have been a good thing for me in opening up a lot more and becoming more talkative and outspoken,” she said. “I didn’t really talk much at Goodrich. I was more of ‘only speak when spoken to.’ Just being around the people I grew up with, that kind of opened me up as a person.”

Finding the right home was important when selecting a college, so when McQueen chose Illinois over 20 other offers, Kirkland was a major reason why. The former Ferris State two-sport star has been at Illinois for eight years, but her connections to the state of Michigan run deep. Not only is she a Flint native, but she also coached at Eastern Michigan and the University of Michigan before making the move to Illinois.

“She’s from here, and she knows how it is here,” said McQueen, who added that talking with Kirkland is like getting a Flint history lesson. “I really like that, and we connected right away.”

While McQueen plays guard at times for the Cavs, she’s used all over the court in coach Lance Belill’s system – which both player and coach agree will make her a better collegiate player.

While Belill said McQueen’s versatility is her greatest strength at the high school level, it’s her court vision and passing that he said would shine in college.

“I think that’s even going to be magnified at the next level,” he said. “A lot of times, she sees things that the other girls don’t.”

Before she heads to Illinois, McQueen still has some work to do at home, as she and her Carman-Ainsworth teammates have the makings of a special season ahead of them.

The Cavaliers are 6-0 and ranked No. 4 in Division 1 in the Michigan Power Ratings index. They have six seniors, including two entering their fourth years with the program – Chenelle King and Jessiana Aaron. Through their first six games, the Cavs have had four players lead the team in scoring, including McQueen with 21 in their most recent win Dec. 27 against her former school.

Carman-Ainsworth’s last two seasons both ended in the Regional round at the hands of eventual Class A/Division 1 Finals champion Saginaw Heritage. There’s a feeling within the program that this year could end differently – but either way, McQueen plans to enjoy her final year at home.

“There are a lot of us that pretty much grew up together, the seniors,” McQueen said. “We’re all talented, and we’re all good basketball players. We’re all really focused for states, but we have to come together and stay united as one, and just have fun our senior year.”