KINGSLEY – It might have been the most thrilling shot of the season for the Kingsley girls basketball team.

It was certainly the most telling.

The memorable moment happened a couple weeks ago when junior guard Jacie King hit a buzzer-beating, half-court shot to give Kingsley an 11-10 lead over Maple City Glen Lake after the first quarter.

Kingsley went on to capture the battle of unbeatens, 61-45.

“They didn’t beat us one quarter (because of that shot),” King said.

Well, nobody has beaten 14-0 Kingsley in a quarter this season. Heading into Thursday’s contest with Onekama, that was 56 quarters and counting.

Not surprisingly, Kingsley, ranked No. 2 in this week’s Associated Press Class B poll, had won 13 of its first 14 games by 34 points or more.

With three weeks to go, Kingsley is within reach of what would be the program’s first 20-0 regular season.

The schedule ahead includes a rematch with once-beaten and reigning Northwest Conference champion Glen Lake, this time on the road Feb. 20.

But the Stags are more concerned about the present than the future.

“We’re taking a one day at a time approach,” Schelich said. “I tell the kids try to win every day, whether it’s in the classroom, at practice, whatever. Keep focused and win every day.”

That’s what his players are doing.

Schelich, who led Kingsley to the Class C Semifinals in 2008, returned the nucleus of last season’s 18-4 squad. It was a season that ended in the District Finals with a loss to Kalkaska, a team the Stags had beaten during the regular season.

“Last year ended in disappointment,” Schelich said. “We felt we had a legitimate shot to win the league and the District. In the long run, it might have been the best thing that happened. It was eye-opening. We didn’t have a focus on what was right in front of us.”

Schelich went to work in the offseason to change the team mindset from “me to we.” His intent was to get his players on the same page and help them “learn to play together,” senior guard Kelsie Bies said.

“If we use all our resources, all our talent, we can be that much better,” Bies said. “I love that about this team. We’ve learned how to trust each other.”

“Nothing we do is for ourselves,” junior forward Marie Pierson added. “It’s about team and how much better we can get (working together). Our motto is “All Heart.” We have to love each other, trust each other because we’re all in it together. We’re working really well together.”

It helps that there’s a strong chemistry between the players.

“What makes this team so special, so awesome, is that we all get along,” King said. “There’s hardly any arguments.”

“A majority of these kids could be averaging 20 a game, here or anywhere else,” Schelich said. “Basically, what we have, are eight kids averaging 8 to 12 a game.

“Balance is hard to beat. Balance with depth is really hard to beat. The kids have bought into the we. They don’t worry about who is getting credit.”

Schelich admits it’s a “competitive” group, and often practices are tougher than the games, especially when he can also draw from a 13-1 JV team. 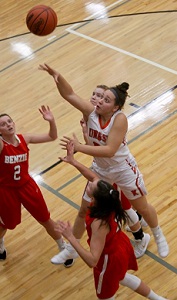 “We divide our kids so we have two good varsity teams going at it in practice,” he said. “How many coaches can divide their team up, have it be competitive and have their players get better? Not many. Most teams, boys and girls, have two or three kids that have to get it done for the team to have a chance.”

“We don’t go easy on each other,” Bies said. “We push each other. Most of the time, our games are not as intense as our practices.”

For Kingsley, it all starts with pressure defense.

“We create a lot of offense with our defense,” Schelich said. “As a group, we are very athletic. I talk about playing defense in waves. That first wave, well, it’s a pain to play against our guards. They are quick and relentless. If you think you’ve got one beat, here comes another one.”

Kelsie Bies is the catalyst on the press.

“She can really move her feet and make people uncomfortable,” Schelich said. “She can go baseline to baseline to make plays. It’s like a beagle on a bunny. It’s her defensive energy, tenacity, that gets us going.”

Bies has stepped up her offensive game as well. Through the first 10 games, she was hitting 49 percent of her 3-pointers.

Kingsley is currently without Boyajian, who has been battling knee injuries.

“She’s had both knees repaired, and one is acting up right now,” Schelich said. “She just had an MRI. We hope to have her back soon.”

But that’s where the depth pays off.

“It’s been a luxury,” Schelich admitted.

Much to the chagrin of opposing coaches.

Frankfort coach Tim Reznich, who has led the Panthers to two Class D titles, is a believer.

“They’re good,” he said. “They have a legitimate shot at being a Final Four team. They have great depth. I think (Schelich) has 9 or 10 kids that could start on any given night. When he’s making substitutions, it’s nothing to look forward to as an opposing coach. They keep the pressure on and, in some cases, turn it up more.

“They have all the tools. They have good perimeter play, solid posts, and they’re good in transition. If you slow them down, they have girls who score in the halfcourt set. It’s a complete team.

“I told Matt (earlier in the season) that he has a special group and to enjoy them while he can. They’re making the best of it. They’re all in rhythm on the court. It’s a fun team to watch.”

And it’s also a team that is starting to get more recognition in the polls.

“It’s definitely exciting to be ranked that high because most people don’t even know where Kingsley is,” Bies said. “But we don’t talk about it. We don’t focus on it.”

Instead, the focus is on improving every day.

“It’s February – we have to get better (for the MHSAA tournament),” Schelich said. “We can’t be content.”

That’s not good news for opponents in the north, especially since this run could last awhile.

Schelich has two sophomores on varsity in Bowman and Maddie Bies. Plus, more are on the way.

That’s not what opposing coaches want to hear.

“There will be a learning curve for some of the young players when they get there (to varsity),” Reznich said. “But, no question, they’re just reloading the next couple years.”

PHOTOS: (Top) Kingsley’s Marie Pierson drives to the basket against Benzie Central last month. (Middle) Jalynn Brumfield cuts through defenders in the Stags’ 67-30 win over the Huskies, who are 12-2. (Photos by Ron Stremlow.)