GOBLES — One coach retired and one coach was hired, but both have one reason in common: family.

“I just wanted to spend more time with them. Instead of being in a gym coaching on Tuesday and Friday, I would rather be with them studying or just having some Friday night fun.”

Greg Barber took over the position after coaching the junior varsity girls for five years.

That gives him more time to spend with his daughter, Amanda, a junior in her third year on varsity.

His other daughter, Erica, is an eighth grader who also plays basketball.

“I brought my daughters up through the youth program, so I was involved in that when they were in the third grade on up,” Barber said. “I just like coaching.”

One goal for the 8-3 Tigers is continued success in the MHSAA postseason which begins March 22 with District play.

Last year, Gobles won their District and then lost a 42-41 heartbreaker to Schoolcraft in a Division 3 Regional Semifinal. (Soon after, the season was put on hold and final rounds eventually canceled due to COVID-19.)

“I didn't want to be one of those coaches that retired when the program was struggling,” he said.

“We have a great group of young ladies back and some solid young talent that helped in my decision as well.”

He said handing the coaching reins to Barber was easy.

“He has been in the program for a very long time as a youth and JV coach and has a great rapport with the team,” Curtis said.

“Having (current junior varsity) Coach V. (Marc VanHeukelum) around was a big help as well. He's been by my side forever, and they will keep the program at an elite level.”

Junior guard Amanda Barber, who joined the varsity midway through her freshman season, did not see much of a change when her father took over as coach.

“They have different coaching styles, I would say, but overall they both are good coaches so it’s not hard to be coached by one or the other,” she said. 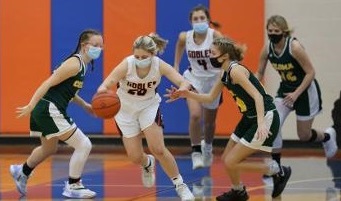 The 5-foot-4 Barber leads the team in points, averaging 16 per game, and assists with three per game. Senior Karlee Henderson leads with seven rebounds per game.

“Amanda’s put hours and hours in the gym working on her game and her shooting,” he dad said. “Just countless hours of work.”

Other juniors on the team are Madi Brady, McKenzie Lisowski and Emily Baxter.

Other seniors are Keaghan Kelly, Abby Sandahl and Deven Thompson. The lone sophomore is Kaya Huizenga.

Moving Up, Staying Together

Kennadi Killeen made the jump from eighth grade hoops to varsity without playing a game of JV.

That took a bit of adjustment.

“The game just got a lot faster and the girls got a lot bigger,” the freshman guard said. “You don’t have as much time between shots to think about everything, so you just have to know what you’re going to do before you do it.”

‘It did make the transition a lot easier because there weren’t a lot of people watching,” she said. “There weren’t as many people to be afraid of making a mistake in front of,” she added, laughing.

Killeen has worked her way into the starting lineup.

“She’s averaging five or six points a game and about five rebounds as a freshman, so she’s doing real well,” Barber said.

Deanna Wood is the other freshman on the team.

The coach said team unity is a key to their success.

“The junior class has played together since third grade so they’ve played the travel ball, some AAU stuff,” he said. “They’ve stuck together.

“It’s a very talented, athletic group. A couple young freshmen on the team this year have played a lot of basketball.”

Barber said working with the girls when he coached the JV team helped him with the move to varsity.

“I’ve coached them all through their JV years, so it was a pretty simple transition,” he said.

In his 18 years as head coach, Curtis’ teams compiled a 304-107 record, won 10 conference, eight District and two Regional championships, making it to the Semifinals once. 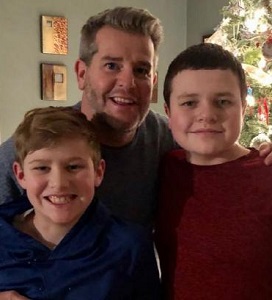 There are a few things Curtis will not miss.

“If I’m going to be 100 percent honest,” he said, “I won't miss dealing with all of the aspects off the court. The players and parents are changing just like society, which can make the job really tough.

“I've realized that as a coach you can't make everyone happy, and not too many people can see the entire picture these days.”

But since retiring, “the one thing I miss is those tough Friday night road games,” he said. “There is nothing better than going to an opponent's gym with a buzz in the gym and silencing their crowd with a win.

“I always took pride in how mentally tough my teams were, and that competitive feeling after those types of wins will be missed.”