EAST LANSING – Saginaw Nouvel holds daily school Mass in its gymnasium, allowing Rachel McInerney and her teammates to reflect on a few things – including photos of the Panthers’ 2006 and 2008 MHSAA championship teams staring back at them.

“And every day in practice, we’d say our picture is going to be up there no matter what,” McInerney said.

In her final opportunity Saturday, Nouvel’s 6-foot-2 senior center more than did her part to make that true.

With lingering regrets from last season’s Class C championship game defeat to Manchester, McInerney seemed to take them out on St. Ignace with one of the most impressive statistical performances in MHSAA Finals history – 22 points, 23 rebounds and five blocked shots – as the Panthers broke away for a 62-40 win and the their third title.

“I just left it all the floor. I wanted to remember this game as a great thing,” McInerney said on the topic of redemption. “We more than achieved that.”

But it wasn’t as simple as a reigning runner-up returning to take the final step.

Nouvel entered this tournament ranked only No. 10 and after assistant Mary Jo Skiendziel was promoted to head coach with only two games left in the regular season.

But she couldn’t be more familiar. Skiendziel also is a Nouvel graduate and coached the freshmen basketball team for six seasons in addition to helping the varsity at the start of this winter. And she inherited some key leaders, including three who started in the 2013 Final.

“From the beginning, we knew our team would stick together through anything,” said Nouvel sophomore guard Laurel Jacqmain, one of the other two returning starters. “Our goal was to get back here, and we knew we could with each other. That’s what we were going to do.” 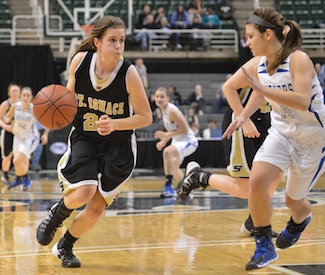 After handing Gobles its only loss of the season in Thursday’s Semifinal, the Panthers faced an even more imposing obstacle in St. Ignace – last season’s champion in Class D, which brought four starters back this weekend and was playing in its third championship game in four seasons.

That’s what made how Nouvel won a little shocking. Aside from 4-2 after the first minute, the Panthers never trailed – and led by as many as 26 after holding a one-point advantage at halftime.

“We came out in the second half on fire, and that’s exactly what we’ve done all season,” Skiendziel said, the championship trophy sitting beside her. “Nothing’s different except we have new wood to take home.”

McInerney also did her part as a leader, making sure her teammates soaked in the value of the moment during the game and reminding them to have fun. “Just because I experienced it last year, I know what it’s like to let it go by. I did not have fun last year,” McInerney said.

And her 23 rebounds were the third most in an MHSAA Final, fewer than only Kelly Rose’s 25 for St. Joseph Lake Michigan Catholic in the 1988 Class C championship game and Paula McGee’s 24 for Flint Northern in the 1979 Class A Final.

“She just intimidates,” St. Ignace coach Dorene Ingalls said. “She had maybe struggled a little bit, didn’t score like she usually does in the Semi (three points). But we knew what she was capable of, and she showed it today.”

McInerney had only four of her points during the 24-7 third-quarter run, but did grab six rebounds and block four shots during that 8-minute span. Jacqmain did most of the offensive damage during the period, scoring 13 of her game-high 23 points.

Junior guard Margo Brown scored a team-high 16 points for St. Ignace, and with sophomore center Abbey Ostman will attempt to lead the Saints back to Breslin for the sixth straight season in 2015. Senior Kelley Wright, who set an MHSAA record playing in her 102nd varsity win Thursday, had eight points and four steals in her final high school game.

“I don’t take losing very well, and I don’t know how long it will be before I take a look at these last two films,” Ingalls said. “But I wouldn’t want to be up here with another group of kids. It’s not the stuff on the floor. Everyone who meets them, gets to know them when we visit people, they become Saints fans for life. They wear their uniforms from the inside out.”

HIGHLIGHTS: (1) Lindsay Stroebel of Saginaw Nouvel makes a steal with time running out in the first quarter and beats the buzzer to give her team a 13-9 lead against St. Ignace. (2) Margo Brown led St. Ignace with 16 points. Here she cans a 3-pointer late in the first half to pull her team to within a point of the lead.