OSCODA — The tide has turned in Oscoda.

After struggling year after year in boys and girls basketball, the Owls are enjoying quite a turnaround on the hardcourt this winter as both teams enter the final month of the regular season undefeated — just one of two schools in the state to be collectively unbeaten in boys and girls hoops.

The boys team boasts a record of 15-0 and is 9-0 in the North Star League Big Dipper division, while the girls squad has cruised to a 12-0 mark, including going 5-0 in league play.

It hasn’t always been that way, however.

The boys team has reached a stretch where it has failed to win a league championship in 27 years or District title in 18 straight seasons, while the girls program became infamous for having lost 89 consecutive games at one point.

“We went almost four and a half years without winning a game,” said Oscoda varsity girls basketball coach Mark Toppi, who took over the girls program four years ago. “They had only had a couple wins in the past three years before I took the job.”

The Owls had been caught in a rut for most of the last few decades, partly due to a precipitous decline in the school’s enrollment after Wurtsmith Air Force Base was decommissioned in 1993. As families left the area, Oscoda became a shell of itself. At one time Class B playing within the North East Michigan Conference, the school was unable to remain competitive with its league rivals as its student population was slashed in half. It eventually made sense to leave the NEMC, and Oscoda toiled as an independent before finding a landing spot in the Huron Shores Conference, which eventually morphed into a reconfigured North Star League in 2014.

Things began to trend in the Owls’ favor last season as a group of talented and ambitious athletes started making their mark. It’s a core of players who have gotten better by working hard, dedicating themselves, including honing their games and picking up additional competition on local travel teams. 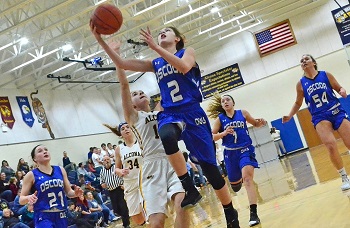 “We kind of saw it coming,” said Alda. “Last year we were 14-8, which was our first winning season in 15 years. We returned a lot of players off that team. Last year we were young, and this year we’re still young. We have a lot coming back next year too.”

“We’re guard-oriented,” said Alda. “We like to get up and down the court. We press. We shoot a lot of threes. Typically, we go four out and one in — four guards and one post player. We like to push the tempo. We like to increase possessions. We’ve got three kids (Mallak, Kellstrom and Franklin) who are shooting over 35 percent — a couple of them over 40 — from the 3-point line.”

The girls team managed to come up with 13 wins a year ago despite not having a senior on the roster. That was part of the ascent from three victories in Toppi’s first season, to seven wins two years ago. The 13-9 record in 2017-18 earned Toppi the Associated Press’ Class C Coach of the Year Award.

With all that returning experience from the best girls team Oscoda had seen in years, the Owls were primed for an even better season.

“I could tell we were going to have a good year, just because of all the work they put in over the summer,” said Toppi. “We had a lot of success (last summer). We play up all the time whenever we go to team camps. We always try to play Class B or Class A schools. We take a lot of beatings in the summer. This year was the first year that we were winning against some of those schools. That was a nice sign. I try to tell them, ‘If we’re losing by 15 to a Class A school, that’s not bad.’ This year we were beating some of them.”

The Oscoda girls team has a bit more experience than the boys, with senior Katelyn Etherton in her fourth year as a starting guard. She reached the 1,000-point mark in her career earlier this year. Junior post player Lauren Langley is another key veteran who teams with Etherton, and each average close to 17 points per game. Sophomore Macy Kellstrom leads the team in steals and assists as the point guard, and classmate Izzy Hulverson is averaging a double-double in points and rebounds.

The problem the girls team has discovered is it isn’t getting pushed by the teams on its schedule. The Owls are winning by an average of 34 points per game. A 41-25 win over Tawas was the closest to date. Toppi hopes not having a close game during the regular season won’t hurt the Owls when they get to the postseason. For now, he’s just focused on getting the Owls ready for a tournament run. 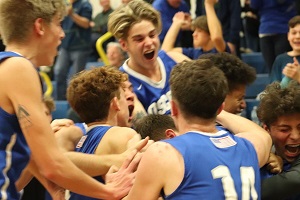 “I’m just trying to get them to play hard and practice hard,” he said. “I don’t want them to look at the schedule. We’re still trying to get competition in practice and get better every day.”

The boys games have been a little less one-sided, particularly two clashes against league rival Mio. Oscoda beat the Thunderbolts both times, but one was a seven-point win in a back-and-forth game a week ago and the other was a 35-33 nail-biter earlier this season that wasn’t decided until Mallak drove the length of the court and scored on a buzzer beater.

The buzz has caught up to the Owls as the wins have continued to pile up for both teams.

“Around the school I feel like everybody’s wearing Oscoda across their chest a lot more proudly than what it was a while ago,” said Franklin. “Wherever you go, people know who you are now.

“Every practice Mr. Alda talks to us about how we could be the first in so many years to do this (or that). Early in the year we were 8-0 and he was like, ‘You’ve got a chance to go 9-0. That hasn’t happened in 30 years. He talks to us a lot about making history.”

The struggles the school endured in basketball are not forgotten, but both teams are doing their part to make better memories on the court. The girls already snapped a 48-game losing streak to nearby rival Tawas, and the boys swept the Braves for the first time in 20 years. The boys team is also close to ending that elusive conference championship drought, and both teams have their eyes on earning some District tournament hardware.

“I keep talking about how exciting it is when you get to tournament time, if you can make a run,” said Alda, who was a freshman on Oscoda’s last basketball Regional champion in 2000. “This is just a really cool thing to be a part of.”

PHOTOS: (Top) Lauren Langley, left, and Brayden Mallak have been key to Oscoda’s perfect starts; Mallak here hits the game-winning shot against Mio. (Middle) Katelyn Etherton beats everyone to the basket during a win over Lincoln Alcona. (Below) The Owls celebrate that Mio victory Dec. 13. (Photos courtesy of the Oscoda girls and boys basketball programs.)