GROSSE POINTE WOODS – Kim Ayrault and her husband Andy were careful not to overly encourage their children to play sports, specifically basketball, the sport they played so well for so long.

But if their children did decide to play, they would teach them to play the right way and be there every step of the way.

Julia and Joe Ayrault, juniors at Grosse Pointe North, are the first set of twins born to Kim and Andy. Annabel and Adam are the second. Born nearly four years apart, all four play basketball and the younger pair play multiple sports.

The Ayraults are a family whose lives often revolve around practices and games, and driving to and from said events. It can be simultaneously rewarding and tiresome, and they wouldn’t have it any other way.

Kim recalls one of her first memories of Julia, a 4-year-old bouncing up and down the court.

“She went to the basket and scored,” Kim said. “Then she came back down with her ponytails flying and waving her hands up in the air, and I said to myself, no, no, no. I went up to her and said, you can’t do that. You can’t celebrate like that. She learned. She never did that again.

“She was competitive at that age. She was born ready to play.”

Julia Ayrault started bouncing a basketball just about the time she learned to walk. When her parents introduced her to the sport, she dove in head first and hasn’t looked back.

She tried soccer. That didn’t last. As a second sport she preferred baseball, but basketball was always first.

Julia and Joe, 16, both play varsity basketball and anticipate having more than just a good season. Their parents were also fine basketball players in the Pointes, Kim at North, Andy at Grosse Pointe South. The Ayraults’ other set of twins also play basketball, at Grosse Pointe Shores Our Lady Star of the Sea. Annabel and Adam are in the seventh grade and, yes, they’re good players, too. Annabel plays volleyball as well and Adam plays baseball. He was a member of the Grosse Pointe Shores/Woods Little League team that reach the World Series in Williamsport, Pa., this past summer.

After graduating from high school, the Ayraults began dating while playing basketball at Wayne State University. Andy was a junior, Kim (Reiter) a sophomore. Both had fine careers, both played four years and Andy went on to have a brief career professionally in Europe. The two are tall: Andy is 6-foot-7 and Kim is 6-foot, and, not surprisingly, their children are tall. Julia is 6-2, Joe 6-5. 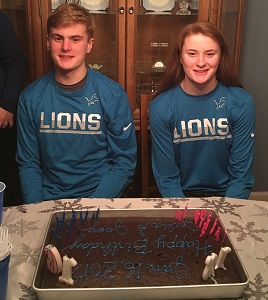 It’s too early to tell, but Julia just might be the best. A three-year starter for longtime coach Gary Bennett, she has committed to Michigan State and is one of the state’s top players in the class of 2019. Bennett coached Kim in high school, and he first saw Julia play when she was in elementary school.

Andy has coached Julia, on and off but mostly on, since she started playing. Currently Andy is Bennett’s assistant coach. Andy also coached Julia at Star of the Sea and began coaching his two eldest children when they were in elementary school.

“From third to sixth grades I had her playing on the boys AAU team,” Andy said. “I used to put them on the same team because she was so good. In the seventh grade we switched out of AAU to the CYO (Catholic Youth Organization). Going on a weekend and playing four AAU games in one day wasn’t doing her any good. Playing two CYO games and practicing three days a week was better.

“Joe should have a breakout season. Julia had a breakout summer. She played more on the perimeter. She’s athletic enough to cover the post and take the ball to the rim.”

Andy has never stopped working with Julia, even if he wasn’t officially her coach. She developed a love for the game at an early age and Andy continued to teach, lending support as Julia’s game continued to improve.

“She blows our mind all the time,” Kim said. “We’ll say to each other later, did she really do that? When I watch, I see it from the stands and it’s a different look than what Andy sees. I’ll yell something at her during the game. Andy doesn’t like me doing that. I still do it.”

In addition to her playing basketball with the boys for three years, the athletically gifted Julia also played outfield and was a pitcher on a little league baseball team with her brother for two years. Also teaming up with Julia on that little league team was Evelyn Zacharias, one of Julia’s best friends and now a member of the North varsity basketball team as well.

One of Julia’s first memories of playing sports is a positive one.

“I remember when I was at Star of the Sea, we went a long way (in the playoffs),” she said. “It started to be a lot of fun. A lot of those girls who were on that team are at North with me. Evelyn and others. We have the memories.”

Kim and Andy have memories, too, and there are many more to come.

Right now, their lives are often discombobulated trying to give the four equal time. It’s a great goal in theory, but much more difficult to accomplish in reality. 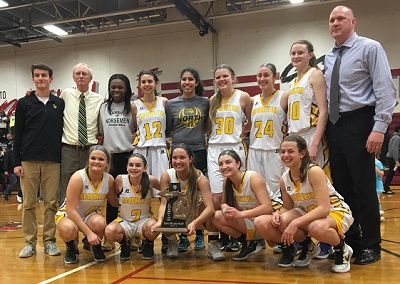 A typical day will find Kim driving home after work as an elementary school teacher to pick up Julia from practice and get Adam to his game at Star of the Sea on time. One particular evening the MSU women’s team is playing the University of Detroit at Calihan Hall and Kim and Julia are going. Home by 10 p.m., there’s time for a snack before the good nights are said.

“People, many of our friends, tease us that we make them do this,” Kim said. “We’ve never done that.”

Kim keeps a schedule of all the comings and goings on a board hanging in the back of the house. She does it alone. She doesn’t trust anyone else to keep track.

Andy is in between jobs so his free time, if you can call it that, consists of completing Kim’s honey-do list.

“We were laughing the other day,” Kim said. “How did we do this before when (Andy) was working? I’m just trying to be patient.”

At the very least, 20 years of marriage will teach you that.

In addition to his work with Julia, Andy coaches Adam’s team at Star of the Sea, and he’s usually the one taking Julia and Joe on trips, whether it be sports-related or the occasional trip to check out a college campus.

Julia said with every member of the family involved in sports in one capacity or another, it helps keep them all together, at the dinner table, riding in a car or wherever.

“(Sports) is a big topic all of the time,” she said. “We have fun with it. We mess with each other.

“My dad has taught me a lot about the game. The biggest thing is to put others before yourself. My biggest thing is to get my teammates involved. Even if they’re not going to play in college, it should be a good experience for them. I try to make sure everyone has their role. I don’t want it to be about me.”