It’s fair to say that few outside of Macomb County and perhaps the Greater Detroit area knew much about Warren Cousino girls basketball and Kierra Fletcher in particular before last weekend. But in scoring a combined 64 points over two games and leading the unranked Patriots to their first MHSAA championship, Fletcher became a possible Miss Basketball Award contender for 2017 and earned the Michigan National Guard Performance of the Week.

The 5-foot-9 guard made 14 of 20 shots for 37 points and added nine rebounds and five assists in Cousino’s Class A 60-45 Semifinal win over Hudsonville, then made 9 of 13 shots for 27 points with eight rebounds and five more assists in the 67-65 upset of Detroit Martin Luther King in the championship game. Fletcher managed her high scoring totals by attacking the basket; in fact, she didn’t take a 3-pointer over eight postseason games. She finished with season averages of 22.3 points and five assists per game and made more than 50 percent of her shots from the floor. Cousino finished 23-4 and also shared the Macomb Area Conference Red title.

Fletcher is a strong student, carrying a 3.97 grade-point average, and a thoughtful teammate as well. She dedicated this season to her best friend Erin McArthur, who previously has shared the backcourt with her but tore a knee ligament during the team’s second practice and was forced to miss the season.

Coach Mike Lee said: “We have had great basketball players, DI players, and leaders, but Kierra has taken it to the next level and as a result of that has taken the team to the next level.  On May 21, 2015, she texted me after a rough AAU practice and said, ‘Coach, for whatever reason something clicked tonight and all the things you preach hit home a lot harder, and I am making you a promise that next season is Breslin or bust.’ And after we won on Saturday, she sent me a pic of the text from that day and said, ‘I told you so.’ She is such an amazing kid with a burning passion for the game. You guys only see the basketball player side, but she is a tremendous role model, 3.9 GPA, great friend, watches my own kids. She is what is right, true and pure about high school sports – a homegrown kid that just wants her school and team to be proud.”

Performance Point: “I think I showed people I can play basketball. People don’t really know who I am, which is fine. I guess since I just played on statewide television that people (might say), ‘Oh, that’s Kierra Fletcher.’ It’s going to be humbling (next year). The rankings to us don’t really matter. Just as long as we know who we are, inside the program, that’s all that matters.”

My game: “I don’t shoot 3s. I’m more of a mid-range, pull-up type person. Three-point shots to me, they’re not very high percentage, so I just try to go in closer, because the closer you are to the basket, the more likely you are to go in. … Defense, I just love it. The length of my body and getting steals and breakaway layups is just fun. I like defense more than offense.” 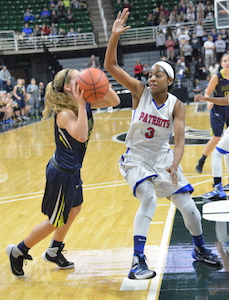 Sharing the rock: “I just want to have a high basketball IQ. It doesn’t really matter how much I score. If I score, I score. If I don’t, I can get my ball to my teammates. I just do whatever I have to do to get the win. … I’m just not a selfish player at all. Sometimes (Coach) Lee tells me I need to be more selfish, but that’s just not who I am. I get hyped when another person on my team makes a play, because it gets me going. Because if I’m getting the layup, it’s just a layup. But if I’m getting someone else the opportunity to score, that’s what matters most to me.”

Investigating her future: If pro basketball doesn’t work out, then I want to major in sociology and narrow it down to criminology and become an FBI agent. I just like to help people. The FBI, it’s different from a police standpoint; it’s more investigative work, being with people and talking with people. I think I’m a people person. That’s something that I like to do.”

Macomb County power: “I think it’s great for Cousino … because everyone knows who Cousino is now. It says a lot because we do have great players in Macomb County. Now, since a team in Macomb County just won a state championship, it gives a whole little watch list for the Macomb County teams. It’s great, because now we’re the poster children of Macomb County.”

PHOTOS: (Top) Kierra Fletcher (3) makes a move to the basket during Saturday’s Class A Final against Detroit Martin Luther King. (Middle) Fletcher defends during the Semifinal win against Hudsonville.