After her team came so close a year ago to winning its first MHSAA championship, the Pittsford senior was ecstatic.

But realizing immediately that her four-year varsity career was done after an incredible 91-8 run, she was sad as well.

What a way to finish. The Wildcats, who ended their first MHSAA Finals trip with an overtime loss a year ago, all but wrapped up their first championship during the third quarter of a 48-30 Class D victory over Mount Pleasant Sacred Heart at the Breslin Center.

“Just coming here last year, I was so nervous. Then we lost, and it was devastating,” Smith said. “This year, when we won, I didn’t know how to feel. I was so happy, and then I started crying because it was my last game. I don’t want to leave these girls; they’re my best friends, and we play so well together on the court. But I’ll come back next year and watch them win again.”

And “tornado” was the operative word of the day, the result of the Wildcats’ most meaningful lesson learned during last season’s championship game loss to St. Ignace.

Pittsford led that game 34-21 at halftime and by eight with a  quarter to play before the Saints came back to tie it by the end of regulation and win 64-60 with the extra period.

Hence “tornado,” Pittsford’s appropriately named halfcourt pressure defense that led to many of Sacred Heart’s 29 turnovers – off which the Wildcats scored 37 of their 48 points.

“We kept our intensity up the entire game, pressuring the entire game,” Pittsford junior guard Jaycie Burger said. “Last year … we came out and our defense just fell apart. The whole game (today), at halftime, we told each other we have to play defense, we’re still playing defense, and that’s what helped us out.

“We really wanted to win this game a lot, and every time we scored a basket, got a turnover, we were just that much closer to winning the game.”

That began to become apparent during Pittsford’s 9-0 run to end the first half that included six Sacred Heart turnovers and put the Wildcats up 22-13. 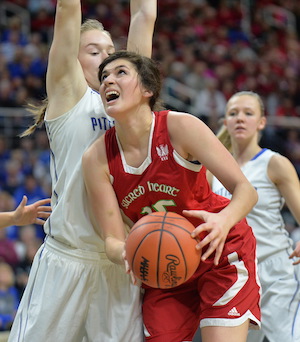 The run continued with the first seven points of the third quarter, coming off three more turnovers.

“Their pressure really caused us to move a little faster than we wanted to,” Sacred Heart coach Damon Brown said. “They made it difficult for us to get into our offense, and when you can’t get into your offense it’s difficult to be effective. I thought we did a good job in the first half of managing that, but then they had that run right there at halftime. I think that got us on our heels, and we were scrambling a bit to try to adjust from there.”

The Irish (24-2) had been held to 30 or fewer points three more times this season, but had won all three of those games.

“We can still work on it,” Pittsford coach Chris Hodos joked. “No, our defense is outstanding. You saw it in our Semifinal game. Our Quarterfinal game, I think we had 24 steals. I asked them to work harder (earlier this winter). We went to some different drills halfway through the season. They did what I asked them – a pretty easy team to coach.”

Like Waterford Our Lady on Thursday, Sacred Heart also couldn’t contain Pittsford junior forward Maddie Clark. She made 10 of 15 shots for 23 points and grabbed 10 rebounds to go with her 24 points and 16 rebounds in the Semifinal.

She and senior Madison Ayers also combined to stifle Irish senior center Averi Gamble, who got off only five shots and finished with eight points – half her average. Freshman guard Scout Nelson was the team’s leading scorer with nine.

Gamble and senior guard Megan English also started on the team that won the Class D championship in 2014. This season they were joined in the starting lineup by three underclassmen and mentored a team that should return the other five players who saw the floor Saturday.

“It doesn’t always have to be about winning. Just being with these girls is a blessing in itself,” Gamble said.

Ayers, who like Smith played on the varsity as a freshman and sophomore, took off last season but returned this winter after being persuaded by her past and now current teammates and also by how much desire they showed during last season’s run. Ayers finished with eight points and Burger had 11, three assists and four steals.

All but Smith and Ayers should be back next season, when the Wildcats will attempt to add to the current juniors’ career record of 75-2.

“From (when we were) little, we’ve always wanted to win,” Clark said. “Seventy-five and two, that’s pretty amazing. We want to keep it going; (we've) got one more year.

“When we were little we played junior pro together, and our junior pro record growing up was like 100-10, so we don’t really know how to lose,” Burger added. “I mean, we don’t like to lose. … It’s been a great, great opportunity that we’ve had. To go through three years with only two losses is a really special thing, and I’m just thankful we get to do it together.”