EAST LANSING – Pittsford’s girls basketball team returned to the Breslin Center on Thursday only a few players different than the team that fell in overtime of the Class D Final a year ago.

But the Wildcats set themselves up to show much difference a year can make with a 62-43 win over Waterford Our Lady in the evening’s first Semifinal.

Three starters and six of eight players who saw the floor in last season’s championship game were among 10 who got time against the Lakers in a rematch of last season’s 57-26 Pittsford Semifinal win.

When a team hasn’t lost a regular-season game in three seasons, what goals are left? Only one, and now the Wildcats have the opportunity to achieve it.

Top-ranked Pittsford (26-0) will face No. 3 Mount Pleasant Sacred Heart at 10 a.m. Saturday. The Semifinal win brought the Wildcats to 74-2 over the last three seasons.

And they didn’t let Thursday’s game remain much of one past the midway point of the second quarter.

Junior center Maddie Clark nearly pulled a repeat of last season’s Semifinal performance. She made 9 of 10 shots from the field for 24 points and grabbed 16 rebounds – after tallying 26 and 15, respectively, against Our Lady a year ago.

The Lakers tried to find a way to draw a second defender to help on Clark, but Pittsford made enough shots from the perimeter to give their top post player room to do her work. 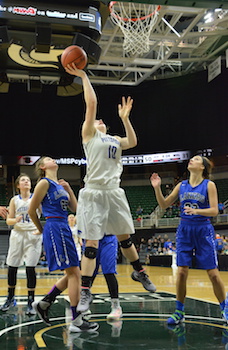 A 3-pointer by senior Laura Smith with 1:47 to play in the second quarter pushed Pittsford’s lead to 10 – and it never dropped back to single digits.

Wildcats coach Chris Hodos said the No. 6 Lakers were the best his team has seen this season.

But Pittsford was plenty prepared.

“Everybody always says ‘unfinished business,’ but this is a totally different team,”  Hodos said. “But it’s been on our minds the whole year. We worked all summer, took all 15 of our dates, played everybody we could play. … We looked this year to get those games to be ready for this time right now.”

Burger added 15 points and three steals for Pittsford. Sophomore Tiffany Senerius had 20 points for the Lakers, and senior Alex Troy had seven and 10 rebounds.

The return to Breslin also added to a nice comeback for Our Lady (20-5). The Lakers made the Semifinals last season but still finished 12-13 after an even more uncharacteristic 8-13 in 2013-14.

This season’s run gave the Our Lady six 20-win seasons over the last eight and provided valuable experience for 10 players who should return next winter seeking the team’s fourth MHSAA title since 2010.

“It’s incredible, really, what’s happened in that last nine years,” Our Lady coach Steve Robak said. “This senior group wasn’t part of those first classes, obviously, but what’s happened at our school is they certainly saw what was going on. And when they got their chance, they were excited to put their mark on the school and get to Breslin and prove to people that first group of girls were not the only basketball players at the school.

“Last year (was) unexpected, but this year they came back very confidently because of that experience.”