Chris Hodos is up for a challenge. In fact, he and his Pittsford girls basketball have been preparing for it for weeks.

The Wildcats on Thursday completed their fourth consecutive 20-0 regular season. Overall, they have won 75 consecutive games, just three shy of the MHSAA record in girls basketball.

If they are going to break the state consecutive wins record and take a third consecutive MHSAA championship trophy home to Hillsdale County next month, they are going to have to do it a rung higher on Michigan’s girls basketball ladder. The Wildcats are Class C this year after claiming Class D titles the last two seasons.

Hodos knows the road will be tougher.

Chief among those returning Wildcats is 5-foot-7 senior guard Marissa Shaw, the team’s leading scorer at 13.6 points per game – and something of a thief. The Jackson College signee has nearly 400 steals in her career.

“She set our school record with 15 steals in a game this year,” Hodos said. “She’s had two triple-doubles with points, steals and assists. She’s been in double figures in assists four times. She’s a real aggressive player.”

Shaw has been on the varsity since her freshman year, playing three minutes in the 2015 Class D Final loss to St. Ignace. That was the last time Pittsford lost a game. All five starters this year have played in multiple MHSAA championship games.

It’s likely no team in the state can match that type of big-game experience.

“All five of my starters have been on the team for three years,” Hodos said. “They’ve been to the Breslin Center through all of this. They know about what it takes to get there and what it’s like to play there. They all have experience. That’s something you can’t teach.”

The deep tournament runs have meant several more weeks of practice than a typical high schooler will play. Pittsford’s played 15 postseason games over the past two seasons alone.

That big-game experience probably played a hand in one of Pittsford’s biggest regular-season wins this year – a 68-56 win over Tri-County Conference champion Morenci. The Class D Bulldogs – who feature a pair of 1,000-point scorers in Mady Schmitz and Daelyn Merillat – were up 10 at halftime. Hodos made a defensive adjustment. and the comeback was on. Pittsford forged a tie at 44-44 going into the fourth quarter and outscored Morenci by 12 during the final eight minutes.

Pittsford won the Southern Central Athletic Association East by six games, going 17-0 in league play. But, that’s all over now. It’s time for the MHSAA tournament. The last time Pittsford played in Class C was 2014-15 when it was erased in the District Final by Adrian Madison.

This year’s Class C tournament starts Monday for Pittsford when it goes on the road to play Clinton, the District host.

As the saying goes, the 101-1 record over the past 102 games is thrown out the window when the tournament starts. 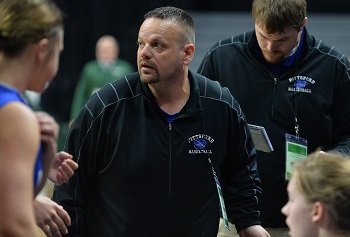 “We’ll run into some good teams,” Hodos said. “I have probably four or five potential teams that we could play on film. I like breaking down film and staying up all night.”

If any potential opponents are staying up all night watching Pittsford on film, they’ll notice something very familiar about the Wildcats’ offense. It’s the same one Hodos has used for at least a decade.

“I run a Bill Self offense, a high-low game,” he said, referring to the Kansas men’s basketball coach. “I’ve ran that since I was a JV coach, and it’s worked. We run it every year. People say you have to change things up or run something different, but, why, if its works?

"We get all kinds of different looks out of it, but that’s what it starts with. The girls know where to be. The repetition helps us. You see a lot of times where basketball players make bad passes. Often, it’s because they don’t know where someone is going to. They get lost in the play. We run the same thing. The girls know where each other will be.”

Besides Shaw, the other seniors for Pittsford are Hannah Patterson and Sydni Brunette, a 3-point sharpshooter. Junior Kennedy Chesney is a 53-percent field goal shooter averaging nearly eight points a game. Junior Alison Toner averages just under double figures. Hodos has three sophomores on the varsity, too.

“We do it more by committee this season,” he said. “We have a lot of girls contributing. That’s how I knew we’d be pretty good.”

Bruce, who’s coached off-and-on for 50 years, was impressed with what he saw in Pittsford last year and this season.

“They won’t embarrass themselves, I’m sure of that,” Bruce said. “People will have trouble with them. Shaw is really good, but after that there is no drop off for the next seven or eight girls. They all play well.”

Hodos is a Pittsford graduate who played football at Adrian College and returned to Hillsdale County to teach and coach. He currently works with students at the Hillsdale County Youth Home. He sometimes leans on his old college coach or other friends in the business for advice or just to talk about coaching. He’s been an assistant coach for more than 15 years with the Pittsford football team, running the defense.

“I try to get my knowledge from everywhere,” he said.

The record consecutive victory streak for boys basketball in Michigan ended this season when Powers North Central – winners of 84 straight – lost in December to Rapid River. The Jets’ is the longest streak in Michigan prep basketball history.

By beating Camden-Frontier on Thursday, Pittsford became tied with Flint Northern for second place on the all-time girls consecutive victory list with 75 straight wins. To tie Carney-Nadeau’s record of 78 straight, Pittsford will have to win the District. To break the record, they’ll have to win a Regional game.

That’s a long way off, but Hodos isn’t worried about it. He’s embracing it.

“It’s going to be a challenge,” he said. “It’s something different. I’m excited about it. I like scheduling different teams every year. A couple of years ago we played a couple of Class A schools that I found that would play us. It’s exciting.”