Reese girls basketball coach Josh Pickell had never been happier to have low turnout through the first two weeks of practice.

The Rockets were down to four varsity players and had to combine with the junior varsity to run full sessions as the school’s volleyball team was making its Cinderella run to the MHSAA Division 3 Volleyball Finals title two weekends ago.

“As a coach, I just have to realize that the girls are going to need some time after doing what they did,” Pickell said. “It’s an incredible feat. It was kind of good for our entire program, with some other girls getting the extra practice time and seeing how cool it is for a girls team like the volleyball team to go that far. It was good for our freshman team and our JV team getting that time.”

All but two of the 11 players Reese took to Kellogg Arena are basketball players, including returning all-state honorees Maddi Osantowski and Aydan Dalak, who were at the forefront of the Nov. 20 title win against Monroe St. Mary Catholic Central.

“I’m just hoping the momentum we had in volleyball, because we have so many girls that play volleyball and basketball, that it would just shift into basketball,” Osantowski said. “Just having that many girls to be able to shift to different sports, I think it shows how athletic the whole team is.”

The multi-sport seniors are taking slightly different approaches to getting into basketball, but neither is taking much time. Osantowski planned to return to practice Friday, giving herself less than a week after recording 71 kills and attempting more than 200 attacks during the final weekend of the volleyball season. Dalak, meanwhile, was on the basketball court Monday. She had been at previous practices, too, just not participating. 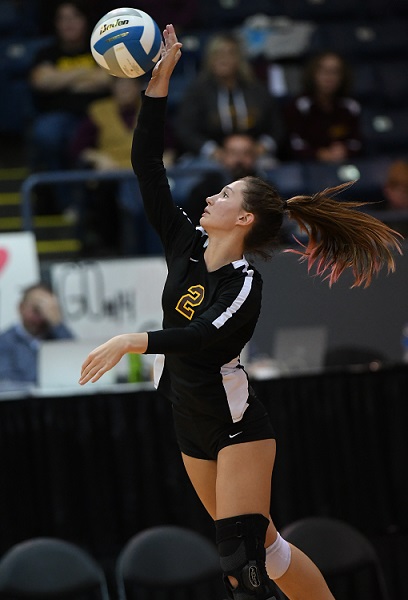 “I just sat and watched sometimes. I just wanted to see how the team was looking,” said Dalak, who was the setter on the volleyball team and plays point guard for the basketball team. “I was a little tired (Monday), and I’m usually not. But I’m not used to running back and forth for 30 minutes. I did OK. It was fine.”

Playing multiple sports is the norm at Reese, a school with fewer than 300 students. It’s necessary to keep multiple programs strong, and the coaches work together to ensure that happens.

“I really encourage doing multiple sports,” Reese volleyball coach Angie Compton said. “Last spring, I called the basketball coach and said, ‘Let’s do our youth camp together.’ That way, hopefully more kids will do both of them. Then, hopefully, you’re keeping more girls thinking that both sports are great.”

What Osantowski – who also plays softball – and Dalak – who has played softball but plans to run track next spring – are doing in terms of success, however, is not normal anywhere.

“If not all of the athletes are playing (multiple sports), the teams aren’t going to be as good,” Osantowski said. “I actually do not play travel. I did travel softball and basketball in middle school, and I did one year of travel volleyball. It’s kind of hard to transition (from sport to sport). I just focus all on one thing in the season, because I know I have to do it for my school.”

Neither Osantowski nor Dalak have made a college choice, but their mindset is pretty similar. Both are leaning toward playing volleyball collegiately, which is a change from years past when they thought basketball would be the route to the next level. 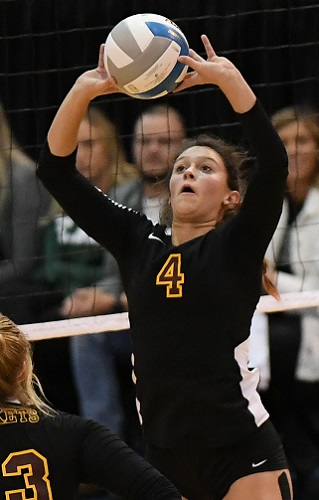 They will juggle that process with what looks to be a promising basketball season. The Rockets are coming off a 12-2 finish, and while their postseason run was ended in the District Semifinal, the loss came against eventual Division 3 semifinalist Hemlock. A familiar connection will lead the way, as the passes from Dalak to Osantowski that proved so successful on the volleyball court are pretty common on the basketball court, as well, with Osantowski’s role as a shooter.

“I’m like her little assister,” Dalak said with a laugh. “She stands in the corner and I’m good at driving and kicking it out to her.”

Just like in volleyball, they’ll be surrounded by a strong group of their classmates, including Josie Johnson. The Reese libero was an honorable mention all-state selection in volleyball, and is a standout guard on the basketball team.

“We’ve already talked about it, we think we can do this for basketball, too, but we have to work hard like we did for volleyball,” Dalak said. “We need to have fun and keep that energy going into basketball.”

But the volleyball title has sparked belief in more than just the players who won it. That's a new feeling for a school that had one Finals title prior to Saturday – won in boys cross country in 1964.

“I think even for the boys basketball team, I was talking to them today, and said, ‘You know, you guys can win a state championship, too,’” Osantowski said. “I think people can see now that we can do this, so they think it can happen more, or at least they can go farther.”