EAST LANSING – For those who may have had something else going on Wednesday afternoon, don’t worry, there will be one more chance to catch the “Kailee Davis Show.”

The Detroit Renaissance senior put her talents on display at the Breslin Center in East Lansing, scoring seven points in a span of 21 seconds late in the game to help her team defeat Wayne Memorial,75-72, in a Division 1 Semifinal.

“It was just about not giving up,” said Davis, who finished with a game-high 33 points in her team’s victory. “I believe in my teammates, and they believe in me. Once they told me to go, I just wanted to win this for them.”

With her team trailing 69-64 with just over two minutes to play, Davis calmly hit a 3-pointer to cut the lead to two points. She then picked up a steal and converted a layup to tie the game at 69-69. Davis topped it off with another steal of the ensuing in-bounds pass and was fouled, converting a pair of free throws to give her team its first lead since early in the third period.

“(Kailee) challenged me on something, when I said ‘She hasn’t been getting to that steal like she did last year,’” Renaissance head coach Shane Lawal said. “I felt like she stepped up today. She told me to shut up. She went out and got two or three of those at the end of the game. That’s all I ever want to do, is challenge my kids, to be the best that they can be.”

Davis finished with 19 points in the fourth quarter alone. She scored 10 of her team’s 12 points during an early stretch of the fourth which cut Wayne Memorial’s 11-point lead down to three. The Zebras (17-3) would stretch the lead back to seven points before Davis and her teammates made the late push to earn a spot in Friday’s Division 1 championship game.

“(Davis) is an absolutely amazing player,” Wayne Memorial head coach Jarvis Mitchell said. “She absolutely willed them to win. She made some tough shots. We tried to make her work as much as possible, but at the end of the day, when a kid is resilient and they want to win … it wasn’t that my kids didn’t want to win, I just think she wanted to win a little bit more.” 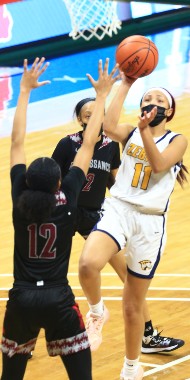 Davis’s performance overshadowed what was a tremendous game by Wayne Memorial seniors Alanna Micheaux and LaChelle Austin. Micheaux, who will be playing basketball for the University of Minnesota next year, finished with 29 points and 17 rebounds. Austin had 25 points, nine rebounds and seven assists for the Zebras. They combined for 29 points in the second and third quarters, when their team turned a 13-point deficit into a nine-point lead.

“Alanna Micheaux, I’m a huge fan of hers,” Lawal said after the game. “Her ceiling is only (going) up. And Austin is going to have a great career in the MAC (at Eastern Michigan). Shout out to those two great seniors.”

Renaissance got off to a hot start against the Zebras. The Phoenix opened the game by scoring nine of the first 12 points, fueled by a corner 3-pointer and steal and drive to the basket by senior Mikyah Finley. The Phoenix finished the quarter on a 10-0 run, thanks to three 3-pointers, two by Finley and one by Davis, in the final two minutes to take a 21-8 lead.

“They played an absolutely amazing game,” Mitchell said of the Phoenix. “They have some absolutely tough kids. They deserved to win. It’s hard to stop a team with resilience. Renaissance never gave in to emotion. They just continued to go fight. And when we thought we had them, they just kept plugging and plugging. And that was the basketball game.”