EAST LANSING – With Thursday night’s Division 4 Semifinal hanging in the balance, Fowler coach Nathan George knew who he could count on.

In fact, he knew two players he could look lean on in tense moments, and they happen to be from the same family.

Emma and Mia Riley made clutch free throws during the final minute to stave off a furious comeback attempt from upset-minded Baraga.

The Eagles hung on to defeat the Vikings 51-45 at the Breslin Center and advance to the Finals for the second straight year as they seek to repeat as Division 4 champions.

“They play a lot of basketball, so there’s not a lot of situations where they get truly overwhelmed,” George said. “So I had confidence in them that they were going to hit free throws. It got crazy late, but we were lucky the ball bounced our way and we were able to put the game away.”

Mia Riley, a senior, delivered a double-double with a game-high 24 points and 11 rebounds, while Emma, a junior, had 17 points and nine rebounds. 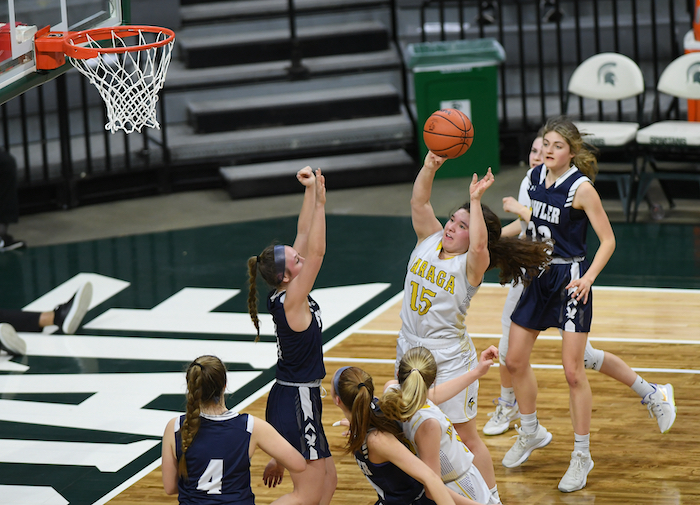 Clinging to a one-point lead (45-44) with 54 seconds left, Mia Riley made a pair of free throws to extend the lead.

After Baraga’s Reide Osterman made 1 of 2 free throws, it was Emma Riley’s turn with 29 seconds left, and she too calmly knocked down both to give the Eagles a four-point cushion.

“It’s like everything you’ve ever practiced for and it makes all that hard work pay off when you can be in that position and finally get the chance to prove yourself,” Mia Riley said. “That was the time to step up, and I’m thankful that I did it.”

Said Emma Riley: “It was pretty scary to be up there and just knowing that we needed the free throws, but we just had to do exactly what we always practice and they should fall.”

Fowler (23-3) will have the opportunity to repeat as Division 4 champion facing Plymouth Christian Academy in Saturday’s 10 a.m. Final.

“Since we've been here before, we’re somewhat used to playing at the Breslin so it’s kind of a comforting thing to know that we’ve been here and we’ve done it before,” Mia Riley said. “We can do it again, and we have those capabilities. It’s a lot nicer since we can have the stands filled and it's not so quiet like last year.”

Fowler built a commanding first-quarter lead as its defense forced turnovers that led to easy baskets on the other end.

Avery Koenigsknecht knocked down a 3-pointer at the buzzer to cap a 12-0 run as the Eagles held a 17-4 advantage.

Baraga trimmed the deficit to 28-18 by halftime and got as close as one from the lead twice during the decisive fourth quarter.

“Give Baraga a lot of credit because they played a good game and probably worked harder than us overall,” George said. “That's something I didn’t expect, and we need to be much more focused and play with more energy come Saturday. I fully believe we will, but I hope this was a wake-up call for the girls and I know it was for me.”

Baraga (23-2) was making its first trip to the Semifinals since 1992, and was the only Upper Peninsula school to make it this far this week.

First-year coach Tyler Larson was proud of his team’s effort in nearly erasing the early double-digit deficit and upsetting the reigning champion.

“Just a tough one,” Larson said. “We didn’t come out the way we wanted to, but we kept it close enough where we could hang around in the second half.

“It was like a boxing match with taking turns swinging and landing punches. We climbed our way back, and I’m very proud of the way the girls handled a little adversity on such a big stage. We just fell a little short in the end.”