But it was the lone senior on the other side of the floor who accepted the winner’s trophy as her classmates chanted “Thank you Sara” for another job well done.

Crystal Falls Forest Park’s Lexi Gussert will pick her career back up again on this same floor next season for Michigan State. But Saturday belonged to Mount Pleasant Sacred Heart and its lone senior, Sara Hansen, as they finished up an incredible comeback with a 56-53 win and the Irish’s first MHSAA title.

Unranked Sacred Heart finished on a 14-3 run over the game’s final three minutes to edge past the top-ranked Trojans and Gussert, this season’s Miss Basketball Award winner.

“We were down by nine. We didn’t give up on anything,” Hansen said. “Once we got closer, it was really exciting. And once it ended, it hit me that it was my last game and we won a state championship.”

“Being the only senior, it’s fun in a way but also kinda tough because you’re the only one going through that. I was really glad we made it this far.”

This was only the second time Sacred Heart had reached an MHSAA Final, after also finishing Class D runner-up in 2008. The Irish made the Quarterfinals two of the last four seasons, including a year ago, but lost both of those games in overtime.

They broke through this week by upsetting No. 3 Frankfort on Tuesday. But there were more surprises in store; the Irish advanced to Saturday by downing No. 9 Marine City Cardinal Mooney in the Semifinal, and then handed Forest Park (26-1) its only loss. 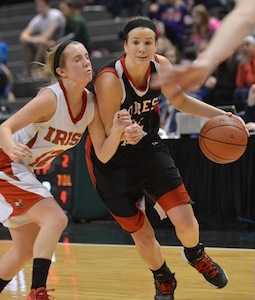 “Wow. That’s all I can say,” Sacred Heart coach Damon Brown said. “It’s been an amazing journey. They found a way to get it done. This team has been in battles like this all season, and their faith in each other and faith in the program never cracked.”

The Irish had done an incredible job containing Gussert – who averaged 29 points per game entering the week – to just three during Saturday’s first half. However, the 6-foot do-it-all guard scored eight during the third quarter and the jumper in the fourth to push the Trojans lead to nine.

The Irish’s Semifinal star with 19 points, she didn’t score Saturday until dropping her first bucket at the third-quarter buzzer. She knocked down another to pull the Irish within 49-42 – and then finished the comeback with the two plays of the game.

Junior Lexie Methner scored with 1:16 to play to bring Sacred Heart within 50-47, and Terwilliger stole the ensuing inbounds pass and scored to make it a one-point game.

“We hang our hat on defense, and we’re not going to go down just missing shots,” Terwilliger said. “We wanted to stay up and get them. It just builds off each defensive stop we get, and it builds up the adrenaline, and we just keep going and going and going.”

Sacred Heart made four free throws down the stretch and Forest Park missed two, with only a 3-pointer by Gussert with 3.7 seconds left keeping the score to its final margin.

Disbelief showed on both ends of the court – Forest Park that its lead disappeared, and Sacred Heart that it suddenly stood as champion.

“It’s unlike our team, but I think we cracked a little bit at the end,” Trojans coach Jeff Syrjanen said. “These kids are a veteran team, and they played with pressure the last three years. Sometimes things don’t work the way you wanted them to.

“It’s a really tough loss for us. We thought we could finish the deal this year."

Lost a bit in the comeback was how 6-3 sophomore center Averi Gamble kept the Irish in the game through the first three quarters. Daughter of former Boston Celtics forward Kevin Gamble, Averi had 25 points and 11 rebounds.

Brown recalled how he told Gamble it was her time after all-state honorable mention Erica Hansen graduated last spring. Gamble took it to heart, and took some advice from her dad: “Just to be strong with the ball, jump, pump-fake a little, and just make my shots,” she said.

Senior center Kendra Campbell scored 16 points for forest Park, and Gussert finished with 17 points, 12 rebounds, four assists and four blocked shots. She’ll end up in the MHSAA record book as one of the top scorers in girls basketball history – but wished for just a few more.

“The third quarter we had a really good run, with a lot of nice passes and a lot of nice looks, but I feel like in the fourth quarter I tried to do too much,” Gussert said. “My team did everything it could possible. I feel bad. I didn’t finish, and that’s the truth.”

HIGHLIGHTS: (1) Off the steal, Crystal Falls’ Lexi Gussert passes downcourt to Sierra Robarge, who kicks out to Kendra Campbell for the 3-pointer and an early lead for the Trojans. (2) Coming out of a timeout, Sacred Heart's Riley Terwilliger hits a 3-pointer to give the Irish the lead for good in the Class D Final.