His wife, Debbie, was sitting a few feet away at the scorer’s table.

Next on the to-do list was find and hug his daughter, Dani, an LCS sophomore who dribbled away the final seconds for the Cougars after scoring a game-high 21 points. Last, but not least, there was another daughter, freshman phenom Bree, who had just scored 19 points and had several key baskets during Lenawee Christian’s second-half rally. His sons, Tyler and Jaxon, were nearby, too, and ready for a quick high-five.

For the Salenbien family, basketball is a passion. Whether it’s in the family’s backyard in Lenawee County or on a basketball court somewhere in southeast Michigan, the “silly game” as Coach Salenbien calls it not only has meant a lot to his family, but to the Lenawee Christian family, too.

“Our community is very much behind us,” Jamie Salenbien said. “It’s a great wave of support. We’re enjoying every minute of it.”

The Cougars won the school’s first Regional title since 2010 on Thursday, beating Plymouth Christian, and will play Athens (21-4) on Tuesday in the Quarterfinal at Richland Gull Lake. LCS is 23-1 and on a 16-game win streak. It’s only loss this season was to Class A Monroe. That loss was by one point, 41-40.

Jamie Salenbien is a Hudson native who played college basketball at Siena Heights University in Adrian. He once scored 50 points in a game in high school but doesn’t like to talk about any individual honors or accolades he has received. He and Debbie have been married 18 years. They met at a friend’s wedding – and that friend was at the Regional game this week in Morrice. Debbie played basketball at Allen Park Inter-City Baptist and in college, too.

The family always has loved a little competition.

Dani said the family talks basketball quite a bit – even at dinner. But, she said, she’s fine with it. 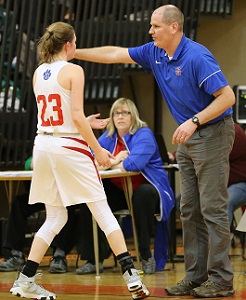 “It’s a part of our family,” Dani said. “It always has been. It’s interesting some of the time. But, its part of who we are.”

Dani, 16, burst onto the prep basketball scene in Lenawee County last season, showing remarkable poise for her age and quickly becoming the team’s go-to player even though they had an all-stater in Kiera Nieto. Bree, 14, joined the varsity this season and finished the regular season as Lenawee County’s top scorer. At 6-foot-2, she runs the floor like a point guard and posts up like a center. She’s the point person on the LCS full-court press, making it difficult for anyone to throw it over her head.

“She can score inside and out,” her father said. “She’s a tough matchup for anyone. We try and utilize her best we can in that fashion.”

Both girls take after their parents – humble, full of smiles and deflecting of the attention.

“I love my teammates to death, and we do it all together,” Dani said. “That makes it all better. We have a term called ‘84-50’ (which are the dimensions, in feet, of a basketball court). We keep everything on the floor. We don’t think of anything outside of the gym or the court. We’re all about each other. I can’t do anything without my teammates.”

Bree said she and her sister have a special relationship on the court.

“I usually know where she is,” she said. “We have a connection. She’s a great ball handler. I know I need to get the ball to her. She’s a great player. My dad is a great coach. My mom is amazing. My brothers are great fans. We just love it.”

Debbie Salenbien works at LCS and serves as the scorekeeper for the team. Just before the tipoff of Thursday’s Regional championship game, after the starting lineups were introduced, both girls walked over to their mom, gave her a fist bump and handed her their warm-up shirts.

“We talk a lot about basketball,” Debbie said. “Basketball is always on television. We go to some University of Michigan games. We just love basketball.”

When the season ends, Jamie said he will have time to reflect on just how special this season has been for not only the Lenawee Christian community but his own family.

And, it looks like there are plenty of more good times to come. The Cougars start a freshman, three sophomores and a junior.

“They put a tremendous amount of time into this silly game,” he said of his daughters and their teammates. “We preach fundamentals – how to pass, catch, dribble, shoot. The whole experience has been awesome. I have to let it soak in more, but I know it’s awesome.”