GRASS LAKE – What will Lexus Bargesser do for an encore?

The Grass Lake senior had an unbelievable junior year, leading the Warriors to their first-ever MHSAA Finals basketball championship, in Division 3, then winning three events to pace Grass Lake’s team title at the Lower Peninsula Division 3 track & field championship meet. She spent her summer on the basketball circuit, traveling the country to compete against top competition.

As she embarks on her senior year of high school, Bargesser is looking forward to having fun, working hard – and bringing home more hardware.

“It was pretty amazing,” she said this summer. “Everything came together and worked out.”

The Bargesser family certainly could have been called the first family of Grass Lake sports over the last few years – in the least for track & field – and Lexus is likely to add a few more highlights during 2021-22. She won’t play a sport for Grass Lake this fall as she’s prepping for basketball season and a hopeful encore to last winter’s achievement. But next month she will begin making college visits and could make a decision before the 2021-22 basketball season begins.

“I don’t really have a timeline,” she said. “I’m looking forward to the season and helping the younger girls on the team grow. I’m excited for it.”

Second-oldest Brennen Bargesser made a splash last school year as a senior both on the basketball court and track, during the spring winning three individual events and running on a first-place relay to lead the boys team to a Finals title as well. 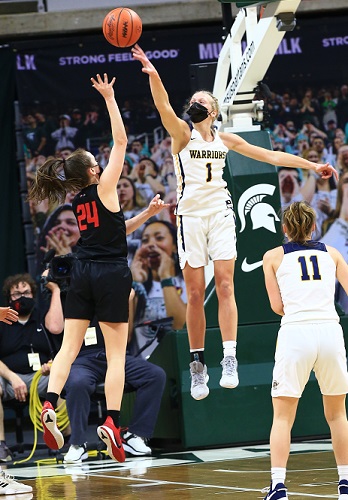 “My older brother and my younger sister are insane athletes,” Brennen said. “I’m the middle child and just wanted to make a name for myself.”

Lexus Bargesser had won the 100 and 200 dashes as a freshman at the 2019 Finals, then burst onto the national prep basketball scene with an amazing summer that saw colleges from across the country start offering her scholarships.

Their parents also are part of the mix. Father David Bargesser coached the Warriors boys basketball team last season and was an assistant to the girls team. Mother Lori Bargesser was the scorekeeper for the boys team.

Sports is the common bond that links the entire family.

“We’re a really close family,” Lori said. “We’ve always just played sports. That’s what we did. We were in the yard from the time I can remember.”

David, who played basketball and golfed in college, and Lori are from upstate New York. They originally moved to Belleville, then landed in Jackson when he accepted a job at the Michigan Department of Corrections. The family has lived in Grass Lake for about 25 years.

“When I got off work, we’d go outside and play basketball or throw the football,” he said. “From the time I can remember, we were always outside playing something.”

Lori said the organized sports started through a local YMCA.

“Xavier was probably 3 or 4 years old,” she said. “David helped coach. Ever since they started, they were always in at least two sports. It was hectic at times, with practice schedules and everything. It was weird when one of them could drive because they could take themselves to practice.”

Xavier, being the oldest, was the first to play organized sports. Brennen soon followed.

“Basketball is very important in my family,” Brennen said.

“As soon as they could walk, they had a basketball in their hands,” Lori said. 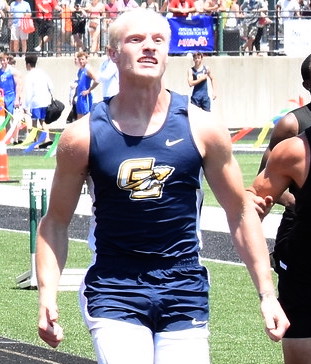 Lexus showed her basketball talent and poise from a young age.

One of the first colleges to offer was UCLA.

“Once one started offering, they all took notice,” David said. “It was a fun two weeks where everyone started calling. She’s would get 4-5 calls in an hour and a half.”

Between the two siblings were seven first places, one runner-up finish and two team championships.

“When Brennen won that first race, I was so happy for him,” Lori said. “He had worked so hard. Lexus had won before, but he never had. That was a great moment.”

The seeds of those championships were formed during the spring of 2020 when in place of their season Brennen and Lexus trained together almost every day.

Lexus and Brennen have always been close. Training together brought them closer.

“We spent all summer running together,” Brennen said. “She was my pacer. She was helping me get my times in.”

Their dad was confident that both could accomplish what they set out to do at this spring’s Finals because he had watched their times closely all summer.

“Going into the year, I was checking times and seeing what other kids were doing,” David said. “I knew both had a chance to do it in all three events. It was definitely the goal. It helped them by training together. Brennen really was into lifting, and I think that helped Lexi get into it. The two of them were always training together, pushing each other.”

PHOTOS: (Top) The Bargesser family celebrated a championship-loaded Lower Peninsula Division 3 Finals; pictured from left: father David, Brennan, Xavier, Lexus and mother Lori. (Middle) Lexus Bargesser (1) gets a hand up on defense during Grass Lake’s 52-50 win over Kent City in April’s Division 3 Final. She finished with 16 points, 10 rebounds and five steals. (Below) Brennen Bargesser crosses the line first in the 100 at the Finals in June. (Top photo courtesy of the Bargesser family; Brennen Bargesser photo by Jason Ruggles.)