GRAND RAPIDS – Defense has been a staple of the Portland girls basketball team all season.

The Raiders displayed that defensive prowess when it mattered most and are on their way to their first Finals appearance after a 45-38 win over Parma Western in Wednesday’s second Division 2 Semifinal at Van Andel Arena.

Portland held the Panthers scoreless the final 4½ minutes to punch its ticket to Friday’s championship game against Newaygo.

“It’s been like that all year for us,” Raiders coach Jason Haid said. “We spend an awful lot of time on defense, and that’s been key for us all year. We felt like they were getting in the paint too much in the first half, so we really focused on closing the gaps and taking away the paint and getting those tough rebounds.”

Parma Western’s Alyssa Gennety scored on a lay-up with 4:29 remaining to put her team ahead 38-37.

Unfortunately for the Panthers (18-5), those were the last points they would muster.

“We tried to slow the game down a little bit, and then we missed some crucial layups and had to put them on the line,” Parma Western coach Gina Fortress said. “We just couldn’t dig out of that hole.”

Parma Western, which was led by Lilli Luma’s 15 points and nine rebounds, also was searching for its first MHSAA Finals appearance.

“Our main goal and the focus for this season was to win a Regional championship, and we did that and then we won on Monday so every game we’ve gotten past we’ve been so thankful for,” Fortress said. “And what an experience for these girls to come here and play in the Van Andel and have the experience we had today. We showed up to play, we gave them a good game and that was our plan all along.” 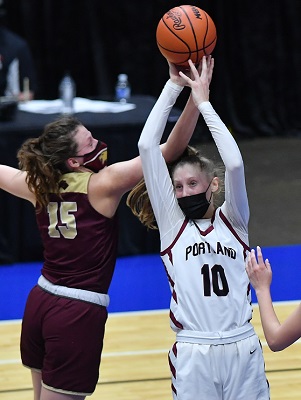 Portland junior guard Ava Guilford made perhaps the biggest shot of the game. Her 3-pointer with 2 minutes left gave the Raiders a lead they would never relinquish.

“I just wanted to help my team any way I could, and my 3-pointer was looking good,” said Guilford, who made four from long range and finished with 12 points.

Portland, which led 25-21 at the half, last made an appearance in the Semifinals 11 years ago.

That made the journey to get back even more satisfying.

“This was a history-making game,” Haid said. “No other Portland team has done that, and this is a very proud program. There’s been a lot of good teams that have come through Portland.

“It’s been a goal of ours to get here, and they’ve been dreaming about this for a long time. I’m just proud of the way they battled all game, and I’m just really happy for them.”

Junior Ashley Bower paced Portland (19-2) with 17 points, including making 7 of 9 from the free throw line.

“We’ve always dreamed about going to the Breslin, and to play for a state championship is just really exciting,” Bower said. “I’m proud of the way we played.”

Added senior point guard Ava Gruber, who had a team-high six assists: “It means a lot. All of us have played together since we were in third grade, and we’ve looked forward to this. All of our hard work is finally paying off.”

Friday’s Division 2 Final will be a rare rematch.

Portland handed Newaygo its only loss of the season, 38-33.

“They are just like us,” Haid said. “They play hard-nosed physical man-to-man defense and mix in a little zone. They have great guard play and they are a hungry team, as are we. It’s a great match-up with two smaller schools going at it again, and we will be up for the challenge.”