GRAND RAPIDS – Give Muskegon a ton of credit. After 11 minutes Thursday, it’s Division 1 Semifinal at Van Noord Arena was all but over.

Two years ago, the Warriors found themselves down 20 points in the third quarter of their Semifinal against East Kentwood. They pulled all the way back to within two of the lead before ultimately losing to the Falcons by four.

This time, Southfield A&T got up 18 points three minutes into the second quarter at Van Noord Arena. But while Muskegon charged back to within two of the lead with 53 seconds to play, the Warriors prevailed 54-50 to earn their first championship game berth.

“Being (at the Semifinals) before, it helped me keep my composure and mentally stay in it. Because two years ago, we were down by a lot at the half, and we had to come back with the same fight that Muskegon tried to put against us,” A&T junior guard Cheyenne McEvans said. “I understand what Muskegon was trying to do, and how East Kentwood held us off is how we had to hold them off from coming back.

“We hung on at the end because we just wanted it, and we all just had to talk to each other and keep each other in the game. I try to take really good pride in keeping my teammates involved mentally, and keep their heads up. So I just told them, the run that they’re going on, we’ve just got to hold it – hold it together to the end of the game.”

The Warriors (24-1) will face Saginaw Heritage in Saturday’s 12:15 p.m. championship game, seeking the first title for the 3-year-old school and also the first for one of the schools that merged to create A&T since Southfield Lathrup’s 2005 Class A win.

Neither team Thursday scored for nearly the first three minutes. But once the Warriors got started, they put up nine straight points over 80 seconds. During the second quarter, they connected on 64 percent of their shots from the floor to carry a 29-13 lead into halftime. 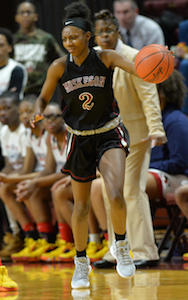 But the Big Reds – making their first Semifinal appearance – began to show signs of revival. They had missed their first 13 shots and 18 of 19 on the way to the 21-3 deficit. But beginning with senior Alyza Winston’s basket with 4:30 to play in the first half, Muskegon made 44 percent of its shots from the floor the rest of the way.

“We’re really a second-half team, if you look at the Regional games, the District games, we came out second half with a whole different energy,” Winston said. “That’s really just us.

“I feel like this game we just needed it more in the first half than we had it, but that’s normal for us.”

A&T still led 44-31 with a quarter to play. Muskegon junior guard De’shonna Day’s basket with seven minutes to play made the deficit single digits again at 44-35. That started a 17-8 run, and a Day 3-pointer pulled the Big Reds to within 52-50 with 53 seconds to play.

Muskegon (21-5) got the ball back on a jumpball. But A&T did hold on – two more times. First junior center Jasmine Worthy blocked off the lane to force a travel as the Big Reds looked to tie. After senior Soleil Barnes made two free throws with six seconds left to push the lead back to four, the Warriors got a steal to end the game.

“Having been to the final four, and won a championship before, I know defense is really going to make a difference,” said A&T coach Michele Marshall, who led the Lathrup title run. “You can score a ton of points, but ultimately you’re going to have to get some stops.

“When we play defense the way we did in that last possession, it becomes very difficult to get easy shots, and all we’re trying to do is make the most difficult shot with our defense.”

Now A&T gets the rare opportunity to avenge its lone defeat. The Warriors fell to Heritage 45-43 on Dec. 8 at the Ypsilanti Arbor Prep Icebreaker Invitational.

“I feel like this is the game we can use to cross out our record, if we can get this win,” Johnson said. “We want to come out with a clean record and we feel we’re number one in the state, and this game will prove it.”