Still a fan of the Irish, his allegiance will be with another Catholic school tonight as Gaylord St. Mary takes on Sacred Heart in an MHSAA Class D girls basketball Quarterfinal. Myler’s daughters, Bekah and Emily, are key contributors on a 22-3 St. Mary team that beat Frankfort and Fairview last week to capture the Regional championship at Buckley.

“I’m all about my daughters, my family,” Myler said. “They mean the world.”

Bekah Myler, a senior center, averaged 16 points in leading St. Mary to its third Regional title in five years – surprising Frankfort along the way. The Panthers, led by Central Michigan-bound Mackenna Kelly, won the Regional the two previous years and advanced to the Semifinals a year ago.

The Snowbirds will be in an underdog role again Tuesday. Sacred Heart (22-1) beat St. Mary by 12 points in an early January nonleague contest.

“We’re going to go into that (Quarterfinal) game with the same mentality we had against Frankfort – that we can play with anybody,” Bekah Myler said. “We definitely have a fire burning in our hearts.”

“Frankfort was one of the best games we’ve played all year, hands down,” she said. “Everything clicked. We definitely have to bring it like that (Tuesday). We’ll have that underdog mentality. We feel we have something to prove. We know we can beat them. We just have to go out there and play hard.”

The Snowbirds breezed past Fairview 56-27 in the Regional Final. St. Mary held the Eagles without a field goal for more than nine minutes to open the game. However, it was the 54-41 win over Frankfort that drew attention, leading St. Mary coach Dan Smith to proclaim, “We’re back.”

It’s not that St. Mary had become a non-factor. The Snowbirds were 18-5 a year ago without a senior in the lineup. But District losses to Bellaire the last two years left an empty feeling. The Snowbirds made amends this season, topping Bellaire in the District Final.

“When I said ‘we’re back’ I meant we’re back deep into the tournament,” Smith said. “That’s where we want to be. That’s our goal every year – to compete for a Regional championship. It’s never easy, but we’ve got some kids that can play basketball.”

Young kids, too. The Snowbirds start two seniors, a junior and two sophomores. The two sophomores, guards Hunter and Averi Bebble, started on varsity as freshmen.

“We knew our sophomores had room to grow, but they’re talented kids,” Smith said. “They play a lot of basketball, probably 100 games a year (between high school and offseason teams). Their growing pains were felt last year. They came into this season in a much better position. Their confidence was at a B level at the start of the season. We’re closing in on the A level right now.”

Smith calls Hunter one of the best guards in northern Michigan.

“She’s very quick, plays outstanding on-the-ball defense and has a sweet shot,” he said. “We’re excited about our backcourt.”

Hunter and Bebble stood out in the Regional. It was their ability to handle Frankfort’s defensive pressure that limited the Panthers’ ability to create turnovers and transition scoring opportunities. The two then applied pressure of their own, attacking the basket on the offensive end.

“Bekah’s tough in the post and usually draws a double team, so that leaves cracks for Averi and Alex to penetrate,” Smith said. “They’re both quick, great ballhandlers, and they’ve got a good first step to the basket. If they see daylight, they’re going to get to the rim. If they get shut down, they’ll dish to Bekah.” 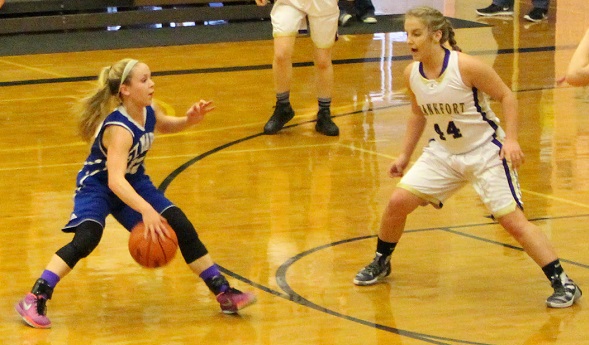 The versatile Myler, who has scored nearly 1,200 career points, is the top option offensively. She can score in the post or on the perimeter.

“She does a lot of good things for us,” Smith said. “She allows our guards to do what they do because she draws a lot of attention in the middle.”

St. Mary showed some depth in the Regional, too. Myler netted 14 points, junior Gabby Schultz 11 and Hunter and Bebble nine each in the win over Frankfort. Myler came back with 18 points, senior Giorgi Nowicki 10, freshman Olivea Jeffers nine and Bebble eight in the title game with Fairview. Sophomore Emily Myler pulled down a team-high nine rebounds while Hunter added five assists in the Regional finale.

The play of the underclassmen, especially the sophomores, has not shocked Bekah Myler, who played on the Snowbirds Quarterfinal team in 2013.

“Those girls have put in so much work during the offseason,” she said. “Basketball is a year-round sport for half of our team. I’m not surprised. They put in the work. They deserve a moment like this.”

The Snowbirds finished second in the Ski Valley Conference to Johannesburg-Lewiston (19-2). It was a close second as St. Mary dropped a pair of two-point games to the Cardinals.

“The fact we lost those two games (to Johannesburg-Lewiston) actually helped us keep our edge,” Smith said. “It was a gift in disguise. It gave us the energy to work towards the rest of the season and point to the tournament because that would be our time.”

That’s proven to be the case. Now, though, the stakes get higher with Sacred Heart looming.

“We’ll have a little bit of a chip on our shoulder,” Smith said. “We’re going to bring everything we’ve got. They’re a great program. I have a lot of respect for (Sacred Heart coach) Damon Brown. He does an excellent job. But our team is far improved. We’re not the same team that we were earlier in the season when we faced them. We’re very excited about the opportunity.”

The Snowbirds would like to reverse a recent trend. St. Mary narrowly lost its last two Quarterfinal appearances – 42-40 to Climax-Scotts in 2013 and 59-57 to Crystal Falls Forest Park in 2012.

“It’s a pretty big deal for us to be here right now,” Bebble said. “But we want to break through (that barrier) and get to the Breslin.”