But the work of juniors Alivia Densmore, Ava Guilford and Ashley Bower was enough to carry the offense as the Raiders (20-2) racked up a 52-32 victory over Newaygo at the Breslin Center.

Bower led Portland with 20 points, while Guilford and Densmore chipped in 12 each. Earlier this season, Bower went over 1,000 points for her career and set the school scoring record.

“This whole season has been fun,’’ she said.

Friday’s Final matched a Raiders team making its first championship game appearance and a Newaygo team playing for its first title since 1985. It also was a rematch from Feb. 24, when Portland defeated Newaygo 38-33.

Portland coach Jason Haid recalled Friday how his team had a cancellation during the season and “we wanted to find a team that would test us. Newaygo came down during the middle of the week.

“Having played them helped. The number one thing we had on our minds going into this game was defense and defending ball screens. We know everything they were going to do would come off ball screens. The Longs (sisters Jaylee and Jaxi) are tough, and we knew we had to get out on them.’’

The Raiders trio combined for 40 points through three quarters as Portland built a 42-25 lead against the offensively-struggling Lions (21-2), who didn’t have a player reach double figures scoring. 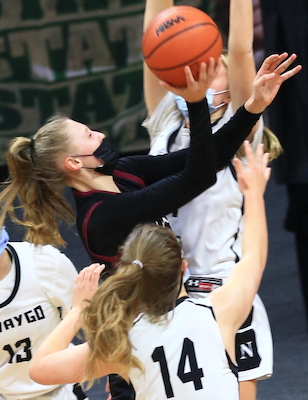 “It wasn’t our night,’’ Newaygo coach Nate Thomasma said. “They took us out of a lot of things we wanted to do. It wasn’t for a lack of effort. That was the sum of the story.’’

After Bower scored the first four points of the game, the Lions went on an 8-0 run. But Densmore hit a floater in the lane as the first quarter ended to give the Raiders a 9-8 lead. Neither team shot better than 23 percent from the field over the first eight minutes.

Portland started hitting an offensive stride and outscored Newago 9-3 to open up an 18-11 lead during the second quarter. Densmore, along with Bower and Guilford, combined for all 18 points.

Densmore, just like she did in the first quarter, hit a buzzer beater to send the Raiders to the locker room with a 20-12 cushion.

Said Guilford: “My teammates were able to find me. Ashley is always unselfish, and it was important for us to stay confident and relaxed.’’

Newaygo got offensive life when senior guard Anna Brummel hit consecutive 3-pointers and Jaylee Long added a third to trim the deficit to 35-24 with 3:11 to play in the third quarter. But the Lions would get no closer.

PHOTOS: (Top) Portland’s Alivia Densmore works for an opening during Friday’s Division 2 Final at Breslin Center. (Middle) The Raiders' Ashley Bower makes a move at the rim with Newaygo players walling her off. (Click for more from Hockey Weekly Action Photos.)