GRAND RAPIDS – Not often is the reigning champion the hunter and not the hunted. But that’s how the Saginaw Heritage girls basketball approached this season.

With the graduation of some key members from the 2018 Class A title team, the Hawks felt they were being overlooked.

On Saturday, they re-established themselves as the top team among the state’s largest schools, now classified as Division 1.

“If anything, we kind of felt underestimated, like a lot of people didn’t think we were going to get right back,” Heritage senior Shine Strickland-Gills said. “We lost two players, and they scored a lot … and it didn’t look like we had much coming in through the tunnel after them, so they didn’t really think we were going to go back again. But we wanted to prove them all wrong, and our whole thing was to stick together. Our end goal, everybody’s end goal, was to play in the last game and win. We just knew what we had to do, and we made sure that got done.”

It was the third MHSAA championship for the Hawks (25-2), and it seemed fitting it was this senior class that spearheaded these last two. Strickland-Gills and classmates Moira Joiner and Mallory McCartney have been playing together for more than a decade, and had predicted they could accomplish this before they got into high school.

“They were eighth graders the last time we were in a Final Four, and they all cut school and came down to the Breslin Center and watched Heritage,” Hawks coach Vonnie DeLong said. “We lost that day, and they told me that day, ‘We’re getting back here and we’re winning it, Coach.’ They made good on their promise to me.”

Heritage looked like a team that knew it was supposed to be playing in Saturday’s moment, taking control early and remaining calm and composed while clinically finishing it off.

The Hawks were hitting 50 percent of their 3-pointers at one point in the third quarter, and finished the game with 19 assists on 20 made baskets. Joiner led the way with 17 points, eight rebounds and eight assists, nearly matching the triple double she had in Friday’s Semifinal against Wayne Memorial. Strickland-Gills added 16 points, eight rebounds, six assists and six blocks, while junior Keyonie Champion had 12 points. McCartney added seven points, five rebounds and five assists. 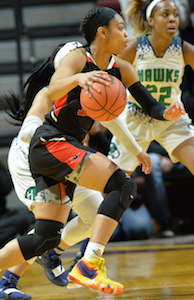 “Having them be seniors, not just seniors, but having been in this game before – having been in these big games is huge,” DeLong said. “Today they just knew. I talked to them this morning and told them, ‘This is it, last time you’re ever going to play together – you're going to keep playing, but not together – and this is the last chance you got. I’m going to tell you right now, last game senior year, if you can go out a winner, that’s absolutely the way you want to go.’”

While Heritage didn’t have much trouble settling in, the Hawks made it hard for the Warriors (24-2) to do so, especially on the offensive end. They played zone and closed down on everything in the paint, forcing Southfield A&T into its worst offensive performance of the season.

It was only the second time all year the Warriors – who shot 16 of 47 (34 percent) from the field – were held below 50 points. The other time was a 45-43 loss to Heritage in the second game of the season.

“They were in a zone, and the zone packed it in a little bit, and we were struggling to find some gaps to attack,” Southfield A&T coach Michele Marshall said. “We play inside-out, and it just appeared the gaps were not there. If they were, when we tried to attack, we were just a little bit hesitant.”

Zone isn’t the typical defensive setup for Heritage, but DeLong said possible fatigue from the previous night’s Semifinal and the importance of keeping Strickland-Gills out of foul trouble pushed her to make the change.

“I don’t think we’ve played a full game of zone all year this year,” DeLong said. “We played it a couple times last year, and it worked in the Final. We talked about it last night, watched some film today and did some walkthrough at a gym this morning. Most of them have played our zone enough, so they know what to do, but a couple of our kids are a little shaky. But we got them through, and it worked.”

Heritage was able to take advantage during that span, stretching its lead to 11 points by halftime and never looking back.