Big North and Lake Michigan Conference girls basketball players have been suffering from double and triple vision the last couple of years.

It’s not a medical condition. There’s no need to see a doctor for treatment. Players, coaches, referees and announcers just need to focus on the numbers.

No more double vision is anticipated in the Lake Michigan Conference when Elk Rapids steps on the court next winter a third-straight league championship. But there will be triple vision in the Big North Conference though as Petoskey seeks a second-straight title. And, the double and triple vision may continue this spring on the soccer pitch.

The double vision caused by the Elks stems from numbers 4 and 5. The triple vision some suffer further north is the results of numbers 11, 20 and 23.

Twin seniors Monika and Mary Gregorski wore the 4 and 5, respectively, as Elk Rapids picked up its second-straight LMC championship this winter. The Big North champion, Petoskey, had junior triplets Grayson, Eva and Caroline sporting the 11, 20 and 23, respectively.

The soccer rosters this spring may make opponents believe they have vision problems.  The twins and the triplets helped their squads make strong showings in the league and postseason last spring.

At one point this basketball season the Gregorskis and the Guys were playing together on the same court as the Elks slipped past the Northmen 41-39 at home. 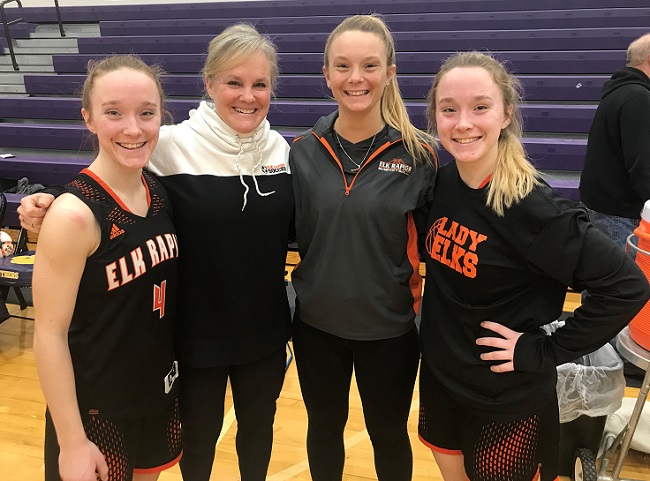 Fans and opponents looking closely at the Elks on the court may be able to differentiate between the twins by their playing. Monika buried 24 3-point shots during the regular season. Mary is the defensive stalwart, earnings an all-conference honor last year with her tenacity.

“They are different players on the floor and different off the floor,” said Elks coach Mike Brown, who had the twins all four years on the varsity. “But they have their togetherness.

“Every shooting drill they’re attached at the hip,” he continued. “They’re both such good two-way players, and they do everything whether it’s rebounding or steals.”

Elk Rapids’ season ended Wednesday night with a loss to Traverse City St. Francis in a Division 3 District Semifinal. The Elks finished 18-3. They were 16-2 last year, falling to powerhouse Glen Lake in the District Final.

Petoskey saw its championship season end Monday night with a loss to league rival Traverse City West. The Guy triplets, who moved from Ohio to Petoskey at the start of the 2020-21 school year, played a huge role in the Northmen’s 14-7 season.

“It is something to have a transfer or two, but four is a whole different story,” the seventh-year coach said. “Coaching the triplets has been fun.

“As close as they are, they are all their own individual,” he continued. “They have fit right in with teammates, and while coaching we don't really see them as triplets but try to maximize the skill each brings to the game.” 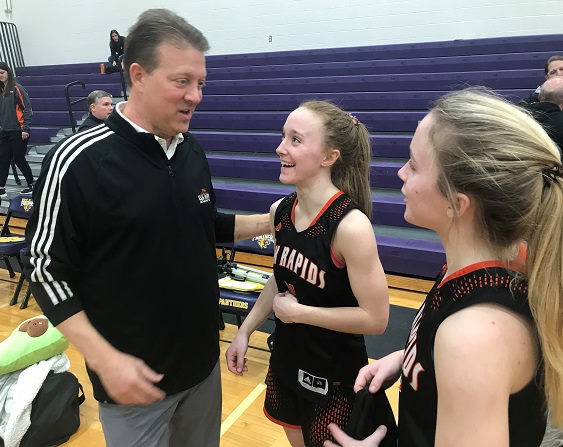 “All of them are competitive and work hard,” Shaw said of the Guy triplets. “Carol is more of a perimeter player, handles the ball well and shoots it well.

“Grayson is more of the swing-type player from the baseline or wing, but can also post up,” he continued. “Eva is steady. … She handles it when we need her to, defends well and hits open shots.”

Eva is turning her attention to soccer as she prepares for another season as a midfielder for the Northmen. Caroline and Grayson may not play soccer, perhaps choosing to focus on offseason basketball opportunities and conditioning.

The triplets don’t play a high school fall sport, and all list basketball as their favorite.

“It’s a lot of fun because we have that bond and connection,” said Eva. “We have been playing together literally since birth. Like right when we picked up a basketball, we all wanted to play and pursue our dreams together.”

With the Guy triplets on the soccer pitch a year ago, the Northmen dropped a tough decision to TC West in their final regular-season game. A win would have given Petoskey the league title. The score was 0-0 at halftime.

“I have been fortunate to not only have had the opportunity to work with all the girls on the soccer field, but also in my economics courses,” said Zach Jonker, veteran Petoskey boys and girls soccer coach and teacher. “The leadership qualities they have developed in their athletic endeavors are also on display in the classroom.

“They each epitomize what it means to be a student-athlete,” Jonker continued. “Each of the sisters has a distinct positive personality, and collectively they have elevated both the culture of our program and the school climate.” 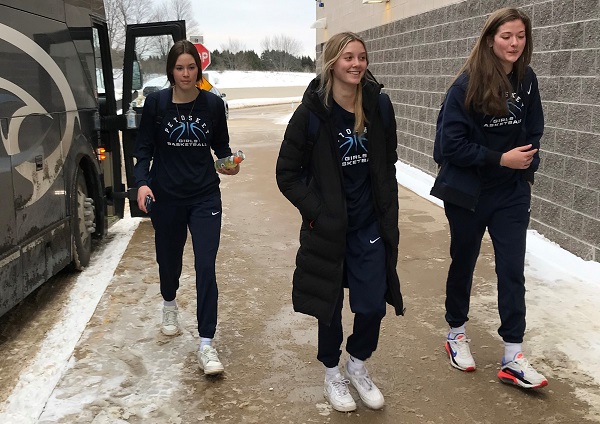 Krakow said she takes the same approach with the twins as she does with any soccer player.

“As far as coaching twins, I have coached them as I would any other players — as individuals,” she said. “Soccer and doubles tennis are both team sports, so all players need to work together.”

“They each have their own personality and are different in several ways, thus I treated them and coached them as individuals.”

Regardless of sport, the twins and triplets believe having siblings on the team is an advantage as they know their teammates’ games inside and out. They all indicate a special joy from playing with their sisters.

“It is really fun playing with her (Monica) because we have, I want to say, is twin telepathy,” Mary Gregorski said. “We always know where each other are on the court.”

“I feel like a lot of troubles on teams is chemistry,” she said. “With the three of us going in, we automatically have so much chemistry.

“We saw each other grow as players and as people,” she continued. “It is super nice to get on the court and see a familiar face.”

Caroline Guy points to personal and team growth over the past seasons coming from having triplets on the team.

“It definitely made us connect a lot more over the years – especially this last year,” she said. “Our connection together — and everyone around us on our team — has definitely grown.

“Getting that closer relationship really helps us both inside and outside the sport.”

Elk Rapids and Petoskey are slated to meet on the Northmen’s soccer field April 7. The Elks won 2-0 at home last spring.