It didn’t take LaTonya Tate long to begin her basketball coaching career. But it took her 20 years to find the right fit.

Tate is in her fifth season as girls varsity basketball coach at Detroit Cass Tech, and the Technicians are experiencing success not seen since Tate was one of the state’s top players for Cass Tech during the mid-to-late 1980s.

As a senior in 1987, Tate led the Technicians to the Class A championship, scoring the go-ahead 3-pointer as Cass Tech came back from 20 points down to defeat reigning champion Saginaw 52-51. Tate that fall also finished runner-up for the Miss Basketball Award, to Salem’s Dena Head.

By returning to her alma mater as coach, Tate has energized the program. Last season Cass Tech won its first District title in 25 years, and this winter the Technicians are 15-1 heading into Friday’s Public School League final against Detroit Renaissance.

For her, it’s been worth the wait.

“This is home, Tate said. “This is a good group of young ladies I have. I’m blessed.

“The first two (seasons) were tough. I was like Cinderella. I was like an outcast. I was the new kid on the block.”

For any new coach, gaining players’ trust is paramount. It takes time. Tate has earned that trust, and the results are taking shape.

A few games this season stick out when assessing the Technicians’ play to this point. A 52-51 victory over one of the top teams in the Chicago Public League, Chicago Phillips, in a December holiday tournament is notable. The following day (Dec. 29) Cass Tech lost to Davison, 53-47, in the same tournament. Davison (8-7), a member of the Saginaw Valley League, recently lost to state power Flint Carman-Ainsworth (13-2) in overtime 52-48.

It was King which Cass Tech defeated (64-56) in the District Final last season, and that win did much to rid the program of some unwanted distinction. King had owned the Technicians since Tate’s departure as a player. King not only became the dominant team within Detroit, but the Crusaders, with William Winfield as coach, became a program everyone looked to as a front-runner statewide. From 1990-2016, King won four Class A titles under Winfield and reached the Finals six other times.

“It’s been 25 years since we beat King, and we beat them two of the three times we played them last year,” Tate said. “It was very gratifying. I’ve taken a lot of beatings from that organization. The entire team did their job (in the District Final).”

Tate’s return is half of a feel-good story for this sport at Cass Tech. Tate’s longtime friend and classmate, Steve Hall, took over the boys basketball program in 2015, coinciding with Tate’s hiring. Hall took over a program that was competitive, but he has taken it to another level. Three years ago Hall’s team won the school’s first PSL title since 1998, and his team won the title again last year. This season the Technicians are 15-1 and ranked No. 4 in the latest Associated Press rankings heading into tonight’s PSL semifinal against Detroit Communications and Media Arts. 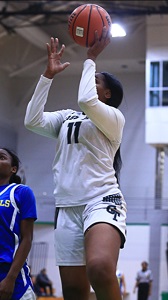 Hall also serves as the school’s co-athletic director (with football coach Thomas Wilcher) and, although he was not responsible for the hiring of Tate, did inform school administrators of his high regard for his old friend.

“Indirectly, I did speak on her behalf,” Hall said. “Our careers have mirrored each other’s. We both had successful high school careers, played in college (Tate at Iowa, Hall at Virginia Tech and Washington) and both of us coached in college.

“It was a home run to get LaTonya. I’m excited for her program. She has a junior-laden team. She was a great player and uses that experience when she talks with her players. She cares about the girls and is passionate about the game.”

Tate began her coaching career at Kansas State as a part-time assistant in 1994. The next season she went to Syracuse as a graduate assistant. Tate was a member of the Detroit Mercy women’s basketball staff for two separate stints, from 1995-97 and 2004-07. She was also an assistant women’s basketball coach at the University of Illinois-Chicago (1997-2001).

As a player at Iowa she was captain of the 1991-92 Hawkeyes squad and played on three Big Ten championship teams. Four times Iowa went to the NCAA Tournament with Tate.

Tate is all in with her program and the school. A substitute teacher in physical education since her return, Tate is working toward her teaching certificate and looking forward to the day when she becomes a full-time teacher.

Even when Tate struggled her first two seasons (finishing below .500 both times), Hall was in her corner. Expectations are high at Cass Tech. Often parents and supporters of the program expect positive results to come quickly.

“When people were impatient, I was there to talk about how much she means to the program,” Hall said. “She’s a real humble and modest person. She doesn’t talk about herself. But I (talk about her). Back when we played the girls played in fall, before we did. They set the bar high. We’ve been friends a long time and we’re competitive, but in a good way.”

As Hall noted, Tate’s team is young but does have experience. Shooting guard Kennedy Tidwell is a returning starter and one of two seniors. Kristen Jones is the other senior and sees playing time at the point.

“We’re better this year,” Fields said. “We were good last year, but our chemistry wasn’t as good. The maturity has changed. Experience has played a big role. Everyone is bigger and better.

“Personally, my shooting is better. I’ve always been a confident shooter, and I worked hard on my game. And I’m more versatile now. I can score and rebound. And I’ve gained maturity. I didn’t think I had to work hard before. I’ve worked hard this season. Even in practice I still push my (post players) to rebound. I take pride in that. I put it into my head that every rebound will be ours.”

Fields said it means a lot to her and her teammates that Tate is a Cass Tech graduate, has won a state title and demands so much of them. The players are proud of what their coach has accomplished and respect the fact that Tate is tough on them.

“It’s the accountability,” Tate said. “It means a lot for us (Hall and Tate) to be here. We walked these halls. There are standards here. Just having pride in what Cass Tech means, academically and as student-athletes.”