But Cardinals’ coach Susan Everhart admitted after that Irish junior guard Riley Terwilliger was not on her team’s radar before their trip to the Breslin Center.

She showed up in a hurry.

Terwilliger, who averaged a respectable 9.3 points per game entering the week, scored 19 and grabbed 10 rebounds and led the key run as Sacred Heart broke away for a 54-42 win and its first MHSAA Final berth since finishing Class D runner-up in 2008.

“I felt I needed to step up at some point in the game, and they were focused a lot on Sara and Averi,” Terwilliger said. “I just did what I had to do.”

Sacred Heart will face either Crystal Falls Forest Park or Athens in Saturday’s 10 a.m. Final. The Irish (21-5) have played only in that one championship game, and as such are seeking their first title.

But they’ve played in plenty of big games this winter, including against a few of the top teams in Class C. And coach Damon Brown could tell that experience paid off in one of the best wins in program history.

Sacred Heart trailed much of the first quarter and half of the second as Cardinal Mooney zoned to give Gamble double coverage and attacked the Irish with its trio of senior standouts.

But when Terwilliger caught fire, it swung everything in the Irish’s favor – including the Cardinals’ defense that had focused so much attention on the post. 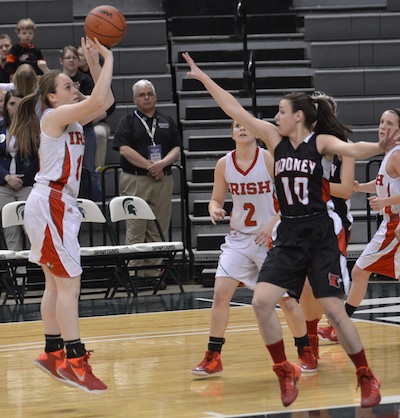 “We know going into games that Sara is number on one people’s scouting reports and Averi is number two. They often forget about Riley, but she finds a way to get open in zones,” Brown said. “She’s the ultimate utility player, and that’s what we need in order to be successful.”

Hansen hit a 3-pointer with 2:55 left to push Sacred Heart’s lead from four to seven points, and Terwilliger then made it nine after a steal and layup to effectively put the game away.

“We thought we had a great gameplan … and we got away from it,” Cardinal Mooney coach Susan Everhart said. “They got a little physical at times for us, and that’s where they got a jump on us.”

Whereas Sacred Heart has just one senior in Hansen, Cardinal Mooney followed a strong class of six to its first Semifinals since 2009.  Guard Katie Theut had 19 points, nine rebounds and three blocked shots, and center Madison Southers added 13 points and 14 rebounds.

“Our girls made it however many years ago, and the guys made it four years ago, so it means a lot to me to be part of the program and get here,” Theut said. “I couldn’t ask to do it with a better group of girls. They’re all my best friends, and sharing this moment with them means the world to me.”

Hansen exited the game during the final minute, and appeared to take pause when the final buzzer sounded before she rushed into Terwilliger to celebrate the moment.

“The last 30 seconds, you just want to get it over. It’s my first State Finals ever, and it’s just really special,” Hansen said. “It’s kinda fun (being the only senior). Everybody looks up to you and stuff, but I don’t look at it as being the only senior. I’m really good friends with everyone, and it’s just really fun. They play really hard for me, and I play really hard for them.”

Click for a complete box score and video of the press conference.


HIGHLIGHTS: (1) Sara Hansen of Mount Pleasant Sacred Heart cans a 3-pointer at the first-quarter buzzer. Sacred Heart went on to beat Cardinal Mooney 52-42 in the Class D Semifinal. (2) Cardinal Mooney hits its own trey to end the third quarter. Katie Theut beats the buzzer to cut the Irish lead to 36-33.