WYOMING – When the month of March rolls around at Wyoming Tri-unity Christian High School, it’s traditionally been a time for the community to rally around the boys basketball team for a lengthy postseason run.

This season, however, the girls basketball program enjoyed similar success with its own jaunt through the Class D tournament.

The Defenders won their first MHSAA Regional title last week with a 58-46 win over Climax-Scotts, upping their winning streak to 13 games after an 8-4 start. Tri-unity’s historic campaign ended Tuesday night with a disappointing 71-30 loss to unbeaten Pittsford in a MHSAA Class D Quarterfinal.

"Our goal was to do this,” Tri-unity coach Bryan Sinner said. “This is my third year, and our goal coming in was to bring some respect to the girls’ side of the program and that’s what we’re doing. The boys are going on a run, and we’re on a run, and it’s been fantastic for the school, especially for these girls now.”

The Defenders finished with a 21-5 overall record, and the banner season was something they knew was possible at the start of the season.

“I knew we could go far as long as we worked together,” said senior guard Sarah Buffum, a four-year varsity player who averaged a team-high 17.5 points per game.

“We had the talent, but we just had to come together as a team. We knew we could do it, and winning Regionals was so special, especially since it was the first time in school history. It meant a lot.” 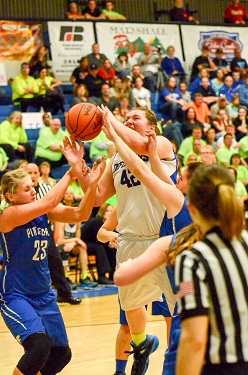 Tri-unity’s other senior, center Marissa Stevenson, said it was thrilling to become the first team to reach the Quarterfinals.

“It was exciting to be noticed and make history for our school,” she said. “I think we were all in a lot of shock when we won, but throughout the season we learned our team chemistry, and our defense really picked up in this tournament. I had so much confidence in our team.”

Said Sinner: “They felt pretty special after that win, and they worked extremely hard for it. It’s a true blessing that we were able to do that, and the support from our fans and community has been fantastic. It’s gone back and forth between the girls and the boys, and it’s really great for our small school.”

The Defenders received a wealth of encouragement from the boys during their journey.

“The boys were supporting us along the way, and that was exciting to see,” Stevenson said. “It was nice to have their support behind us, and we give them our support, too.”

Tri-unity’s squad consisted of only 10 players: six juniors and a pair of sophomores joined the lone seniors.

After enduring two one-point losses on buzzer-beaters early in the season, as well as double-digit losses to Fruitport Calvary Christian and Grand Rapids Covenant Christian, the Defenders began to find their groove.

They gained confidence with each victory and built momentum for the postseason.

“The middle of the season we started coming together and playing as a team,” Sinner said. “I could see some special things happening. There was this determination and this commitment to going out there and leaving it all on the floor. You could see it in their eyes.” 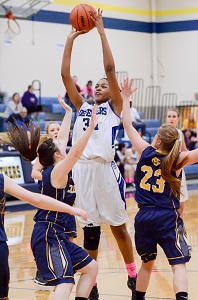 Junior guard Cierra Smith provided a spark for Tri-unity, as did 6-foot sophomore Elasia Craig, who averaged 12 rebounds a game and set a school record for blocked shots with 82.

A demanding schedule, which included games against Class A, B and C squads, also factored into the Defenders’ success.

“Playing those schools helped us prepare and get ready for these months,” Sinner said. “I don’t think we’ve done that in the past, but we’re trying to do that now. I would rather take my lumps during the season in order to prepare us for this time in the season.”

The future of the girls program remains bright with the graduation of only Buffum and Stevenson. An experienced core will be back and a group of younger players are waiting in the wings.

“I have five freshmen playing now, and seven eighth-graders and 13 seventh-graders who are coming to these games and seeing the excitement,” Sinner said. “Hopefully it keeps growing this way.”

PHOTOS: (Top) Sarah Buffum drives during Tuesday’s Quarterfinal loss to Pittsford. (Middle) Marissa Stevenson (42) works to get to the basket Tuesday. (Below) Elasia Craig provides plenty of hope for the future after setting a school record for blocked shots. (Photos by Chris Duzan.)