PETERSBURG – Mickey Moody is making a habit out of taking Monroe County schools to new heights.

While coaching Jefferson’s softball team in 2006, the Bears reached the MHSAA Finals for the first time in school history. At Dundee, Moody coached the Vikings softball team to its first-ever Finals championship in 2013 and into the Semifinals in 2019.

On Wednesday, Moody coached the Petersburg Summerfield girls basketball team to the first Regional championship in school history and a berth in the Division 4 Quarterfinals.

“The girls are really playing well,” Moody said. “I’m so excited for them. It all starts with the kids. I am an old school coach. I’m pretty strict.”

Moody has changed the mood at Summerfield, and the success on the court shows.

“When we were freshmen four years ago, things were a lot different,” said senior Grace Kalb. “He’s definitely changed the mindset. All the coaches have. They are very encouraging. They never give up on us, they always tell us to give them everything we have, and we listen.

“You could feel it changing last year. This year, we have continued down that path.”

Summerfield won 13 games last season in a big turnaround, improving from just five wins in 2018-19 and only four in Moody’s first season coaching Summerfield in 2016-17. Despite the lack of historical success, Moody did not hesitate to tell the girls how far he thought they could go this season. 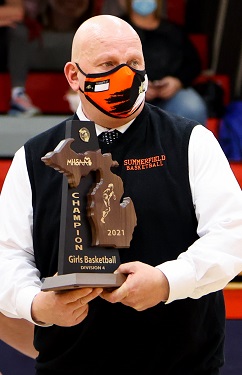 “It started at our first practice way back in November,” Kalb said. “He told us that we had an opportunity to win a Regional, which had never been done before at our school. When we got to Districts this year, we had a plan. This is our year.”

Summerfield was unranked during the regular season. The Bulldogs started out 3-3, including a 33-point loss to Sand Creek. A week later, they rebounded to beat the Aggies by three. Summerfield closed the regular season by winning six of its last seven games and finished fourth in the Tri-County Conference.

“I don’t talk about league championships,” Moody said. “I tell the girls the league is a bonus. I want their ultimate goal to be to go as far as you can. Well, as far as you can means the state finals.”

That is still two wins away, but anything is possible.

The Bulldogs beat Britton Deerfield to win the District title and hosted the Regional which ended with wins against Allen Park Inter-City Baptist and Southfield Christian. The school’s first-ever Regional title came after Kalb scored a career-high 21 points. Sophomore Abby Haller, the team’s top scorer, added 17, and the other senior on the roster, Breanna Weston, scored 11.

“It was amazing to win at home,” Weston said. “It’s been dream come true.”

Moody said the difference in Summerfield’s late-season surge has been defense.

“We are playing much more aggressive defensively,” he said. “We have been able to put a lot of pressure on teams. They’ve always played hard, but we are coming together now.”

In addition to the two seniors, Summerfield has two juniors in Sydney Redlinger and Elaney Fisher and two sophomores, Haller and Destanee Smith. Moody has five freshmen on the varsity right now.

“All five girls of our starters are shooting the ball super well,” Moody said. “Everyone thinks Abby is going to be our leading scorer, but all of the girls are shooting well. That helps because teams can’t just key on one girl.”

Kalb and Weston are four-year players.

“Grace is my steady engine,” Moody said. “I know she’s going to play well defensively. She always does. Her leadership on the floor is even more important.” 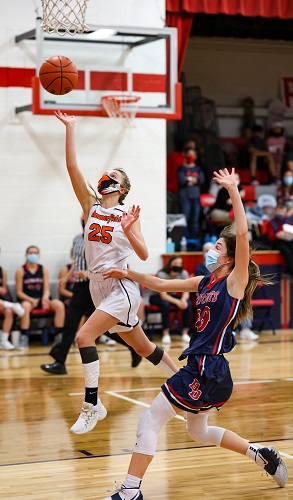 Weston has upped her game in the postseason as well.

“This is the best she’s shot in her four years,” Moody said. “She averaged about 12 points a game during the regular season but has stepped up in the tournament. She looks to score a lot more right now.

“From the time they were freshmen until now, their knowledge of basketball has improved so much. They’ve gotten better every year.”

Moody said the foundation was set for this year’s tournament run with last year’s loss in the Division 3 District. The Bulldogs lost to a solid Blissfield team.

“We played very well,” he said. “I think with that game, the girls saw what they were capable of. Right then we set the goal of getting out of Districts this year.”

“It was different before,” she said. “Before, we were the underdogs. Now, we are the top dogs. We have done something that’s never been done before in our school’s history. It has been a surreal moment. We are making our marks now. It’s been a great ride.”

Moody got his start in coaching on the softball diamond, not the basketball floor. He is in his 10th year coaching the Dundee softball team but has not started coaching the Vikings yet this spring. Before Dundee, he coached four seasons at Jefferson.

“My assistant coaches are running things for me,” he said. “I love softball, but my main focus is the basketball team right now.”

The Bulldogs will take on Waterford Our Lady of the Lakes on Monday in St. Clair Shores.

“We’re going to have to come up with a really good scheme,” Moody said. “They are a good team. Our girls are excited about being this far. I am really happy for them. It’s nice to see their hard work pay off.”

Anything is possible at this point of the season. Summerfield is not planning to back down just because the Lakers might have more postseason experience.

“I’ve been blessed,” Moody said. “Once the kids understand what we are trying to do and the goals, things fell into place. Every team I’ve coached, the work ethic has been outstanding. Once they get confidence, they just take off.”

PHOTOS: (Top) Summerfield’s Grace Kalb, left, makes a move to the basket during her team’s District Final win over Britton Deerfield. (Middle) Bulldogs coach Mickey Moody shows off some of the latest hardware won by his program. (Below) Breanna Watson unrolls a layup against the Patriots. (Photos by Mike Doughty.)