EAST LANSING – West Bloomfield girls basketball coach Darrin McAllister said his team has played all sorts of opponents and their varying styles this season, but he admitted he hadn’t seen a team like Rockford.

And that included Detroit Edison, a squad that hadn’t lost to a Michigan school since 2017-18 before West Bloomfield won their February matchup.

“We have not faced a team that shoots that amount of threes and has the ability to make them,” McAllister said of Rockford.

In contrast, West Bloomfield made only three shots from behind the 3-point line.

“I do play a lot of different zones, but I was definitely searching for something,” McAllister said.

Despite the barrage of 3-pointers and 30-point disadvantage from behind the 3-point line, McAllister saw his young team overcome and find a way, as West Bloomfield made the winning plays at the end to earn a 66-63 win over Rockford.

The Lakers (24-1) advanced to the championship game for the first time since 1989, when it finished runner-up to Grand Rapids Ottawa Hills.

“I’m happy that we won, but if I had hair I’d probably have pulled it out by now,” McAllister joked.

The big reason why West Bloomfield was able to survive was its sophomore forward duo, Indya Davis and Summer Davis. 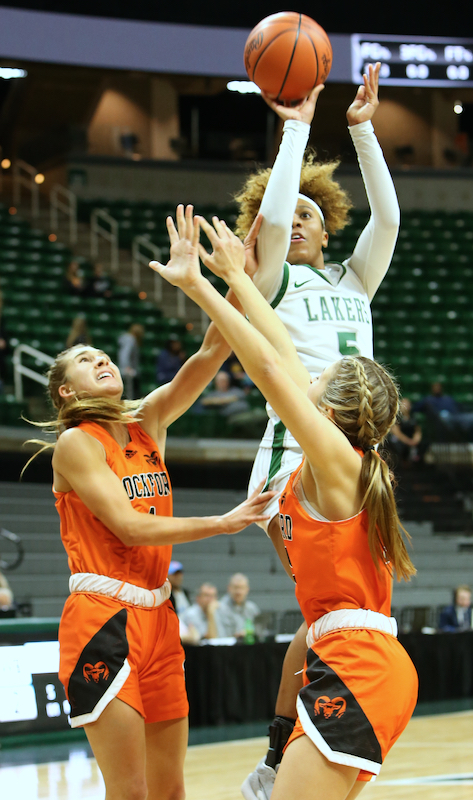 Senior Myonna Hooper added 14 points, and junior Sydney Hendrix had 10 points and 10 rebounds as well for the Lakers.

“I didn’t take it upon myself,” Indya Davis said of her performance. “I took it upon the whole team and doing it for the team.”

Following a turnover by Rockford, West Bloomfield extended the lead to 61-58 when sophomore Destiny Washington hit the first of two free throws with 40 seconds to go.

Washington missed the second free throw, but Summer Davis got the offensive rebound and passed the ball back to Hooper, who was fouled and drained both free throws to give West Bloomfield a 63-58 advantage with 36.6 seconds remaining.

On Rockford’s next possession, a 3-point attempt by Gabrielle Irwin rimmed out and was rebounded by Indya Davis, who got the ball up to Washington.

After being fouled, Washington split a pair of free throws with 14.1 seconds remaining to give West Bloomfield a 64-58 lead and all but seal the game.

The teams then traded two free throws each before Rockford hit a 3-pointer right at the buzzer to account for the final score.

Rockford coach Brad Wilson admitted his team usually doesn’t shoot that many 3-pointers in a game.

“That’s more than normal, but we are fully capable of doing that,” Wilson said. “Sometimes, you take what the defense gives you. We believe in our kids. It’s a little bit unusual, but all five players on the court have the green light at all times. We just believe in them. We attack gaps and pass where the help comes from. We rep that out all year, so we have confidence that it’s going to go in.”

Rockford was making its first appearance as a program in a Semifinal, and the community certainly followed with a good portion of Breslin Center covered in orange.

“I am so proud of our community and the support they gave,” Wilson said. “Just to be a part of something like that, a sea of orange, was just so much fun.”

Rockford then got hot from the perimeter again, hitting three more 3-pointers before the quarter ended to take a 49-48 lead into the fourth.

PHOTOS (Top) West Bloomfield celebrates its Division 1 Semifinal win over Rockford on Friday. (Middle) The Lakers’ Sydney Hendrix (5) gets a shot up over a pair of Rams defenders. (Click for more from Hockey Weekly Action Photos.)