HILLSDALE – The Thielen siblings, with oldest daughter Lizzy and three younger brothers, are getting to do something few families in Michigan have had the opportunity to experience – playing high school basketball together on the same team.

When there weren’t enough girls out for the girls basketball team this winter at Will Carleton Academy in Hillsdale, basketball coach Jason Coward decided to add the girls who would have played for the Cougars to his team.

One of them was Thielen, who has moved back and forth between the junior varsity and varsity boys team – giving her the opportunity to play with all three brothers, sometimes on the same night.

“I would be so sad if I wasn’t able to play basketball this season,” Thielen said. “I really enjoy the opportunity to play with my brothers. Not a lot of girls get to say they did that. I’m thankful I can.”

Will Carleton Academy, with just 50 students, has one of the smallest enrollments of any school in the Michigan High School Athletic Association. They normally have enough players for JV and varsity girls and boys teams and participate annually in the MHSAA postseason.

This year, however, for a variety of reasons including the effects of COVID-19, Coward said only four or five girls were with the program when the season was launched in February.

Coward was familiar with some of the Cougars girls because he coached them in middle school. 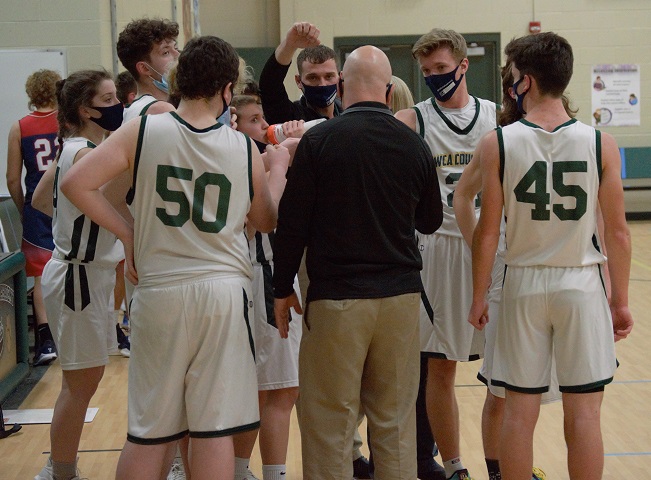 “I knew they were good competitors who could play,” he said.

So, instead of putting the girls team on the shelf for the year, he did the next best thing – he put them on the boys team. Thielen, Sophia Crites and Clemmie Gadwood are all regular contributors at the varsity level. Gadwood has started most of the Cougars’ games this season while Thielen and Crites come off the bench and have also split time between the JV and varsity, something that is allowed this season with an MHSAA rule change that allows players to play in five quarters a night.

Coward said there was no hesitation in the girls being part of the team.

“I don’t treat them any differently,” he said. “They are just part of the team. They do everything I ask. They are great teammates and great to have on the team. They run the drills and have gotten so much better.”

Thielen said the transition from the girls game to the boys game wasn’t always easy. Opponents are often bigger, the game somewhat more physical and the boys use a bigger basketball. Still, in the end, it's all just basketball.

Will Carleton Academy is off to a 6-4 start. The Cougars had a four-game winning streak earlier this season, beating Jackson Homeschoolers, Battle Creek Calhoun Christian, Coldwater Pansophia Academy and Litchfield. They’ve beaten Litchfield and Pansophia Academy a second time as well.

In the second win over Litchfield, Gadwood, a sophomore, made four first-quarter 3-pointers and finished with 12 points.

Gadwood and Thielen have brothers on the team. Gabe Gadwood, a senior, averages around 20 points a game and is the team’s top scorer.

Thielen said it helps having brothers on the team.

“We are all one big family,” she said. “We go home at night and talk about our games or practices together.”

On Friday, the Cougars played Britton Deerfield. BD head coach Darren Shiels was impressed with the play of WCA.

“It should really help their girls program,” said Shiels, who has coached at Britton and Britton Deerfield for more than 15 seasons. “Playing against tougher competition always makes you better.”

Will Carleton will conclude its regular season March 19. Before then they have two games with Jackson Prep along with dates with North Adams-Jerome and Waldron. The Cougars are grouped in a Division 4 District at Pittsford that includes undefeated Hillsdale Academy.

The Cougars are not the only school in southeast Michigan to have girls play as part of the boys team. Vandercook Lake is not fielding a girls team this winter. Earlier this year, Shelby Moore knocked down a 3-pointer in a Jayhawks game against East Jackson. She did so on an assist from her brother.

Coward said the school had discussions during the preseason about becoming a co-op with another Hillsdale County school for girls basketball but decided it would be better to incorporate the girls into the Cougars boys team instead.

The girls coach, Lakyn Sattison, became an assistant coach for the boys team – and Coward said the girls and boys varsity teams could practice together next season. For another month they’ll continue to play together as one – thankful for the opportunity to take the floor every night, proudly wearing school colors.

“Sure, I wanted to play with my classmates and other girls in my school, but I’m getting to play. And that’s all that matters.”