Tom Hursey, 74, will step down as executive director and hand the gavel over to Dan Young, Hursey’s assistant since 2010.

Young, 50, has been on the BCAM Board of Directors since 1999 and a BCAM member since 1994. He was a boys varsity head coach for 15 years spread over three schools and most recently coached the girls program at Salem (2016-18). He also coaches the boys and girls golf teams at Plymouth.

BCAM got its start in the early 1970s when Hursey, then the boys varsity head coach at Midland High; Ron Vondette, then the boys varsity coach at Carrollton; and other coaches in the Midland-Saginaw area formed the Mid-Michigan Basketball Coaches Association. Hursey and Vondette quickly learned that coaches throughout the state were interested in forming an association, and in 1976 the Michigan High School Basketball Coaches Association was formed. Seven years later, the name changed to what it is known as today – BCAM.

The goal of BCAM and its members is simple – to improve and help the sport grow at all levels.

But the challenges Young faces are quite different from those Hursey confronted when he became executive director in 1997. College recruiting has intensified over the past 20 years, and student-athletes transferring from one high school to another also has become more of a concern for BCAM and the Michigan High School Athletic Association.

In addition, Young said there are other topics his association is currently addressing.

“The buzz right now is seeding,” Young said. “And there’s a committee looking at adding two more games to the season, over the holidays (teams are currently limited to 20 regular season games). Tom and I will meet with (a representative from) the MHSAA to discuss the June camps.”

Though just in its preliminary stages, BCAM, in cooperation with the MHSAA, is seriously considering sponsoring a one-day camp for the top players in the state regardless of class. This is in response to the recommendations made last April by a commission led by Condoleezza Rice, the former U.S. Secretary of State, to aid college coaches in the recruitment of student-athletes. Simply put, the NCAA is attempting to limit how much influence AAU basketball has on the recruitment of high school students, and thereby allow high school coaches to have more influence over their players.

These camps, like the MHSAA/BCAM-sponsored Reaching Higher, allow a large number of players, often more than 100, to receive coaching from high school coaches with college coaches in the gym to evaluate. These also feature speakers who address topics such as entrance tests and what it takes to succeed at the next level, academically and athletically.

Young said the next version could be a two-day event, but he does have some concerns.

“We don’t want to disrupt team camps,” he said. “We’d like to run it with the culture of a team camp. It’s still in its early stages, but I think we’d like to get the top 100 or so players, those that are Division I type of players, and have coaches like (Michigan State coach) Tom Izzo, (Michigan coach) John Beilein, Greg Kampe from Oakland and others be there. Maybe it’ll lasts eight hours. Maybe six. We’d have guest speakers, too.

“It’s possible we’d only invite 60 or 70. We’d take the seniors being recruited by Division I schools, as well as the juniors and sophomores.” 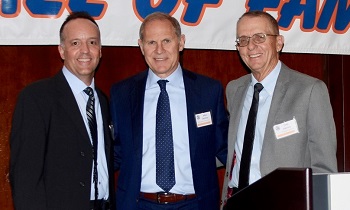 The camp discussion is an example of why the transition is sure to be a smooth one. Hursey and Young are of one mind on the vast majority of issues BCAM faces. Though a generation apart, they see eye-to-eye on matters of importance. They discuss which battles should be fought and those they should avoid.

In many ways the transition is similar to that which took place within the MHSAA recently with Mark Uyl taking over for Jack Roberts as executive director. Uyl, 25 years Roberts’ junior, has stated that Roberts has left a legacy, and that he hopes to follow up on that legacy.

Hursey and Young are hoping seeding will be introduced within the boys and girls tournaments in the next year or two.

On the subject of transfers, Hursey and Young support the new rule instituted by the MHSAA, which states, in part, that a student who transfers will be ineligible for one full school year at the new school in any sports she or he participated in the previous year at the former school (but eligible immediately in all other sports).

Another concern with regard to transfers is the increasing numbers of top-level players leaving the state and enrolling at prep schools, like Findley Prep in Nevada and others. The most recent top player is Mark “Rocket” Watts who left Old Redford Academy in Detroit and is now enrolled at Spire Academy in Ohio. Watts was considered one of the top candidates for the Mr. Basketball Award, sponsored by BCAM.

Beyond educating players and coaches, and possibly parents, Hursey and Young say there’s little they can do from preventing parents from taking their child out of state.

“It’s a sign of the times,” Hursey said. “Dan and I met with Izzo and we talked for two hours about this. Izzo opened our eyes about it. Take the Old Redford (student). They offer him a beautiful dorm to live in, three square meals and the chance to travel around the country. How are we supposed to compete with that? Izzo said they’re playing 30-to-40 games but that only 10 or so are against the best teams. Those are the ones you see on TV.

“There are a lot of positives for staying with your high school. There’s a lot to be said about high school sports being played at a certain level. And there’s nothing like a Friday night basketball game played in front of 2,000 fans and the place rocking. We just have to keep with what we’re doing. We have to educate the coaches. Some of these fly-by-night operations don’t concentrate on the academic part of school. Yeah, we might lose some of our best players, but there are a lot of good players in this state and there still is great basketball being played. This is not just happening in Michigan. We met with the National (High School) Basketball Coaches Association. It’s a problem throughout the country. How can we compete with millionaires?”

Young said BCAM will continue to do what it does best, and that’s to serve coaches throughout the state and promote and help to improve the game through its many clinics and camps. The website, www.bcam.org, has been improved and updated recently, and provides members and nonmembers alike valuable information.